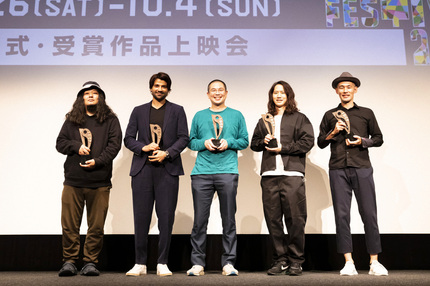 In this viral times simply having a film festival feels increasingly like a win, but not only has Japan's Skip City International D-Cinema Festival wrapped up their 2020 edition - a digital edition of the digitally created cinema festival - but they have done so with an in person closing ceremony with actual winners. Here are all the details!

For the first time, one film receives two of main prizes by the Jury

Launched in 2004 in Kawaguchi City of Saitama Prefecture as a film festival to discover and nurture new talent, the 17th edition of SKIP CITY INTERNATIONAL D-Cinema FESTIVAL has been held from Saturday virtually for the first time, and wrapped at the Closing Ceremony yesterday, Sunday October 4. Jury and Audience award winners were announced at the Ceremony.

Hope (Norway=Sweden) directed by Maria Sødahl, received the Grand Prize in the International Competition. Anja, who lives with her common-marriage partner and six children, is in agony when receiving a terminal cancer diagnosis before Xmas for 11 days. Director Maria Sødahl wrote based on her own experiences he film is her comeback film and only her second directorial work in nine years. Masa Sawada, the President of the Jury, commented, “I thought that the director herself is asking the question of "living" by snuggling up with the protagonist”. It was unanimously awarded the Grand Prize.

In addition, The Pencil (Russia) directed by Natalya Nazarova, won the Best Director and Special Jury Prize. This is the first time that one film receives more than one for main awards by Jury in the history of Festivall! In this work, Antonina, who has come to a remote countryside location after her husband is imprisoned for a political crime there, explained the power of “art” as a way to confront violence while working as an art teacher, creating ripples in a closed village society. Yukiko Mishima, a juror, said, "In response to the feeling of ‘I don't see what I don't want to see’ that is widespread all over the world, ‘I'm going to see what I have to see properly’ and ‘I'm going to live in this society’, the director's message has delivered really powerfully".

In the Japanese Film Competition, Kontora directed by Anshul Chauhan, in the feature film category and Stay directed by Naoya Fujita, in the short film category, won the Best Picture in each category. SKIP CITY AWARD, which is given to a Japanese filmmaker, whose next feature project is highly anticipated, out of all Japanese films in the international and Japanese Film competitions. Kyoko Heya, the President of the Jury, awarded to Woman of the Photographs directed by Takeshi Kushida, and commented, "the film has a very unique perspective".

The Audience Awards, which are decided by viewers' votes, include Hearts and Bones directed by Ben Lawrence and starring in Hugo Weaving for the International Competition, and Cornflakes directed by Teppei Isobe for the Japanese Film Competition in the Feature category, Muito Prazer directed by Park Jengil won the award in the short film category. Director Teppei Isobe has been nominated for the third consecutive year and won the award for the third consecutive year as well. It is the first achievement of the festival!