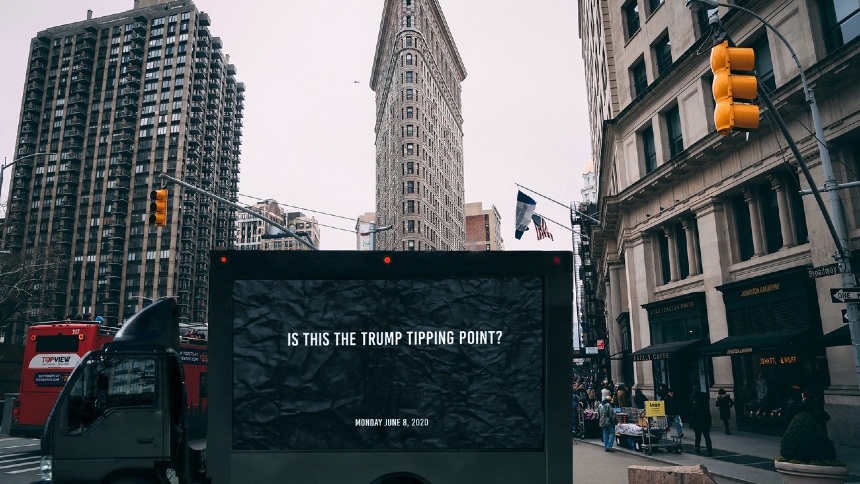 Far from the madding crowd of multiplex movies that are now streaming on a variety of services, a new film and music installation promises something starkly different for any who dare to venture out into the streets during the coming days.

Headlines Are Frontlines "will display news headlines from 1,460 days of the Trump presidency on the sides of moving trucks in cities across the U.S. from October 26 to 28, 2020," according to an official statement. And yes, that's just ahead of the nationwide elections on Tuesday, November 3.

To be perfectly honest, I'm apprehensive about my health everytime I step out my door nowadays. Beyond that, I'm often preoccupied by concerns about the future of the film exhibition business, especially the independents who operate just one, or a handful, of theaters where my cinematic dreams have always flourished. How will the exhibition business change in the future in response to the worldwide health crisis? Or just slowly fade away entirely?

Creative artists, on the other hand, will always find a way to express the impulses that burn throughout their souls, no matter the medium, no matter the audience. That's what is cheering about this mobile art installation, which "sets four years of Trump headlines to music on 12-foot screens," per the official release.

And, even though it's -- really -- some distance from our usual coverage, I admit to an undeniable curiosity about the installation and how it will be received by people on the streets and by mainstream media outlets.

We have an exclusive teaser for the project below, which you can watch below. It sets the tone for what will be rolling out beginning this coming Monday, October 26.

Here's a bit more from the official verbiage:

"The Headlines Are Frontlines tour is a mobile exhibition of a groundbreaking multimedia project, Disintegration, created by artist and filmmaker Smriti Keshari (the bomb on Netflix) in collaboration with music producer Marius de Vries (La La Land).

"Set to a new score by acclaimed British composer Matthew Herbert (Brexit Big Band, One Pig) ... The stark and confronting work briefly and continually flashes each headline in chronological order. The cumulative 1,460 headlines from January 1st, 2017 to the present day make up the two-hour film. Herbert's original score is based on a one-minute performance of the Star-Spangled Banner, stretched and distorted over the length of the film.

"In a medium reminiscent of Jenny Holzer, JR, Bansky and other guerrilla artists, Headlines Are Frontlines bears witness to the daily deluge of headlines Americans have read for four years. The work delivers the somber sobriety of reality, with a display of quiet black-and-white text that is enveloped by unique sound design." 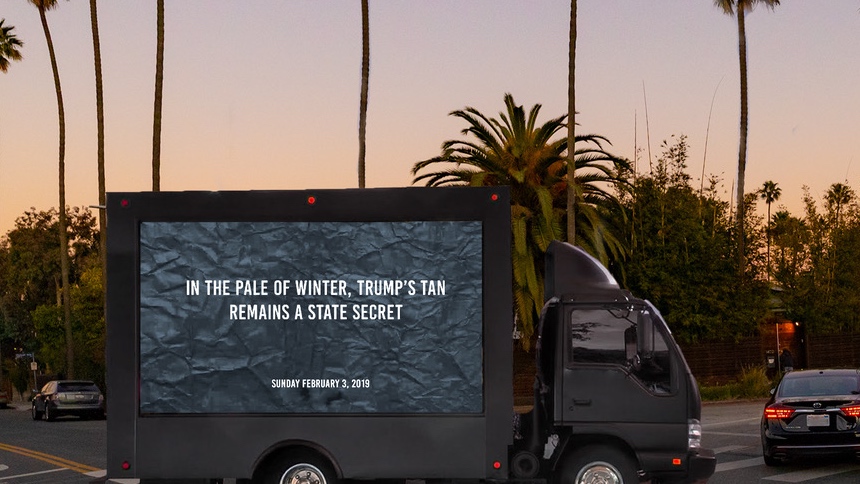