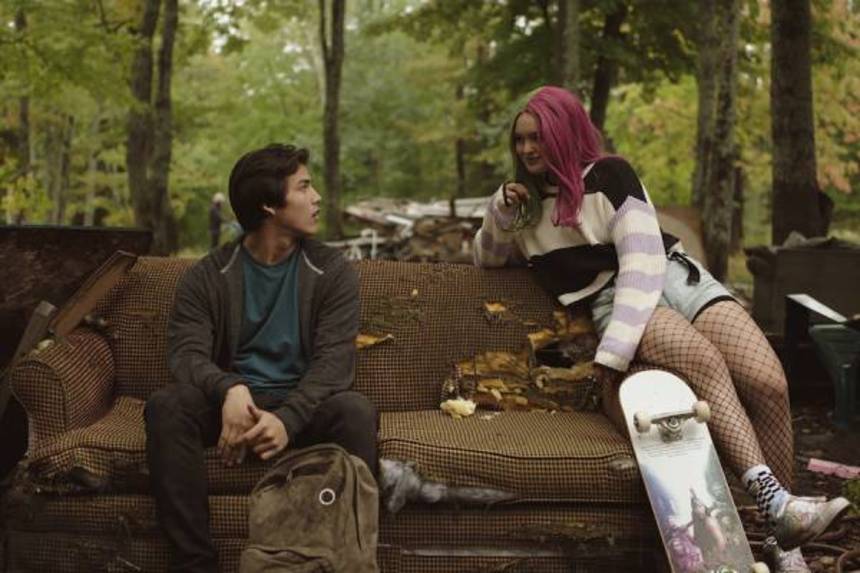 Being a teenager these days is not easy. But if you add to that being one in a rural community with few job prospects, in which you are an Indigenous person and therefore frequently treated like a second-class citizen (to put it mildly), your mother's parenting skills involve being your drinking buddy, your father is working through his own addiction issues, and you are left to be the main financial support, let's just say maybe it's understandable that you might sell some drugs on the side of your part-time job to make ends meet. Oh yeah, and turns out, your real father might be mythological creature.

Such is the premise for a new television series, Trickster. Based on the novel by Eden Robinson, and directed by Michelle Latimer, it weaves together the ancient and the contemporary, the real and the supernatural into a terrific mixture, a coming-of-age story from a perspective and characters rarely seen on the screen (big or small). The first two episodes premiered at TIFF, giving us a terrific taste of what's in store for our hero.

Jared (Joel Oulette) is just trying to keep his frenzied life in some semblance of order, with bringing in money from working at a burger joint (where the code 'extra salty fries' means the ecstasy pills Jared makes in his back shed), trying to keep his mother Maggie (Crystle Lightning) safe while she slips into moments of wild hallucination. His estranged father is trying to kick his drug habit, but with no job and another baby on the way, Jared sees his responsibilites growing. Then a strange man shows up, says his name is Wade (Kalani Queypo), and that he's Jared's real dad. Between these revelations, seeing doppegangers and talking ravens, and regular teenage struggles like bullying, grades, the new pretty girl across the street, and just figuring out how the hell to make it through high school, Jared's life is not in the least what one might call typical.

Teenagers often have a conflict, at once wanting to blend in and stand out. Jared's position as the local drugmaker of choice does not save him from difficulties from bullies, or her mother's new white asshole boyfriend who is hellbent on getting Jared out of the house. But Jared's a smart kid, and a kind one in a world that doesn't seem to have much time for it. Jared finds himself drawn to Sarah (Anna Lambe), a foster kid/anti-pipeline activist, who shows him that there is a different world out there, but maybe not the one who wants to be in.

As Jared's problems keep mounting, the lines blur between the natural and supernatural. Or maybe more accurately, the lines were always blurred and Jared is only just seeing it. As Wade and Maggie seems to be waging some sort of battle for Jared's soul, Jared is discovering the truth of his nature and his power. This personal awakening is set against the backdrop of a community that has been oppressed for decades, and trauma that has spread across generations.

Oulette plays Jared on this balance between cool and kind, letting us see the scared child beneath the laid-back teen, who is just trying to do better, even if it means breaking the law. It's not hard to care about what happens to him, and he and Lightning have a wonderful mother/son chemistry. Latimer presents the story as both the personal and the communal, with Jared's story as one of the new generation who seems at a pivotal moment in Indigenous history, to break the cycle of trauma and find their power and voice.

This is a contemporary indigenous mode of storytelling: mixing the old and the new, a score of terrific artists, excellent actors, a compelling story that is steeped in its culture, a culture that is alive with new faces and voices. If the first two episodes are indicative of the rest of the series, Trickster is on track to be some of the best television of the year, an insightful, fun, and clever blend of the fantastic and the political.