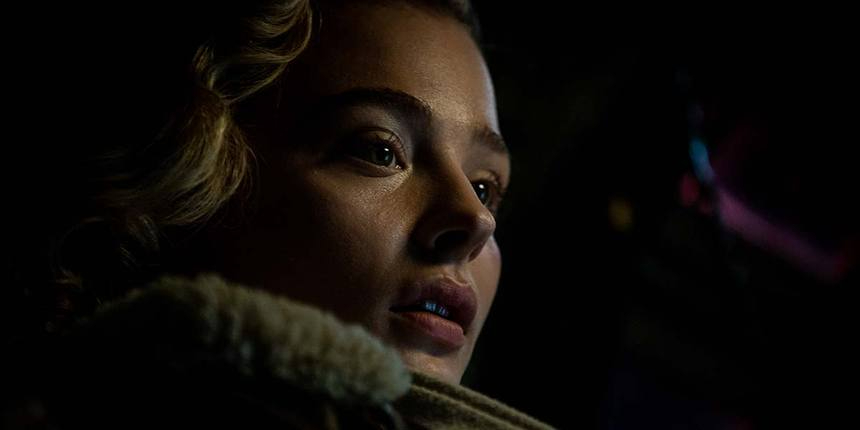 Part World War II aerial action thriller, part creature feature, and one hundred percent disinterested in reality or physics, Roseanne Liang's Shadow in the Cloud is a boisterous adventure bound to delight audiences, as long as they don't think too hard.

Chloë Grace Moretz (Kick-Ass) is Maude Garrett, an Air Force officer hitching a ride on a plane out of New Zealand with some very precious - and very secret - cargo. Her hosts, an all-male crew of chauvinists, are none to supportive of their surprise passenger, but they're bound to get even more irked when the realize the multiple dangers they find themselves in. Garrett's package turns out to be even more precious than anyone expected, and the plane quickly comes under siege from threats both within and without. In a sane world, there's no way anyone survives this hell-ride, but this isn't a sane world, this is Shadow in the Cloud.

Shortly after boarding the flight, Garrett finds herself relegated to manning the gunner's turret dangling from the plane's underside. In what can only be described as a series of unfortunate events, she becomes stuck there and we spend roughly the first hour with her, alone as she attempts to find her way back into the main cabin with her cargo. While down there, she's forced to encounter numerous hostiles, both in the form of enemy planes trying to take them down, and a mysterious shadow hellbent on taking the plane apart one piece at a time, but that's not even the half of it, and she'll be bloodied and harrowed before her gauntlet is run.

Moretz is clearly the star of the film, and her solo act in that gun turret is an impressive piece of one-handed acting. She puts forth a tremendous effort to keep the narrative going, with only the odd misogynistic grunt from the main cabin to bounce off of. Not only is she acting against no one, there's plenty of physical action to keep her busy, all of which is handled with aplomb, and with less than her usual onscreen snark, the film is most definitely an acting highlight for her. However, it's also where the problems really start, and why it's difficult to get completely behind this absurd adventure, as much as I might like to.

An emotional confession about the contents of her top secret cache, and the backstory about its provenance manages to completely derail the narrative for a solid ten minutes, turning this rousing adventure film into a woe-is-me sob story that may have audience members rolling their eyes. Garrett's motivations, it seems, are far more tragic and weepily gynocentric than we've been led to believe, and not in a good, empowering way.

It might be easy to compare her role to the great women of action and horror who end up leading a crew of dopey men against a dangerous enemy, but Garret's reason for being on that plane is so clichéd that it feels like the movie is talking down to us. We're treading dangerously close to spoiler territory with these revelations, but there are a few things that writers have chosen as appropriate motivations for women to lunge into action, and Shadow in the Cloud basically jumps at several of them. It's a disappointing turn for a film where everything else is perfectly primed for fun.

The action, in particular the bravura sequences beneath the plane, is impressive if outrageously absurd. Moretz not only manages to hold our attention without the help of any other cast for those sequences, she also sells some pretty ridiculous physics along the way. The camera moves in a terribly unnatural way, occasionally bringing to mind the wall-scaling sequences from the '60s TV incarnation of Batman, but by that point in the film, it had pretty much showed its cards and the audience should be willing to buy whatever action it's selling. Which is a good thing, because it only gets crazier from there.

Never lacking for action or snappy dialogue, Shadow in the Cloud will certainly be a hit with numerous audiences, but digging a little deeper exposes narrative and story problems that are completely unnecessary and could've been easily avoided. Co-written by Liang and Max Landis (Chronicle), I can't help but wonder whose idea it was to have this strong woman's journey only occur at the behest of her hormones, rather than literally anything else. It's hacky, and it really puts a damper on the film's forward motion and action after the revelation, even though that action is still pretty solid, it's the kind of thing that sticks in my craw.

All that on the table, Liang's confident direction and Moretz's performance are commendable and it seems as though they've done the best with a less than stellar script. The action is superb, the monster movie twist at the halfway point is a fun new layer of splattery violence to the film just when you think you know where it's going. It's just a shame they couldn't translate that level of ingenuity to the story.

More about Shadow in the Cloud