Toronto 2020 Review: NIGHT OF THE KINGS, A Young Convict Fights For His Life In This Stunning Ode To Storytelling 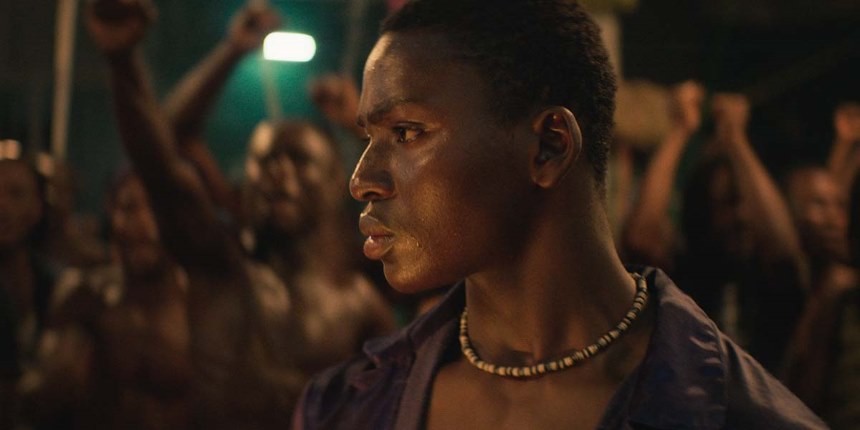 In ninety-three spellbinding minutes, director Philippe Lacôte takes us through centuries of magical storytelling devices in Night of the Kings, as a young convict attempts to talk his way through the night in this magnificent take on One Thousand and One Nights. Featuring a fiercely layered performance from newcomer Bakary Koné as the Scheherazade-esque balladeer charged with this mammoth task, the film becomes more than the sum of its very impressive parts through masterful weaving of sound, light, and movement in one of the year's most impressively artful outings.

A young man (Bakary Koné) stares down his fate as his transport van approaches the more notorious prison in the Côte d’Ivoire, la MACA. His first stretch is about to begin, unluckily for him a man on the inside is facing his own mortality, and that man, Blackbeard (Steve Tientcheu, Les Misérables), the leader of the prison's largest gang, needs a distraction to allow him to set his affairs in order. To that end, Blackbeard resurrects the Night of the Roman, a tradition in which the leader chooses an inmate to tell a story through the entire night, and if he stops, he dies. Our hero is chosen as the Roman, and while he professes not to know anything about storytelling, it soon becomes clear that there is more to him and his own story than he is letting on.

So begins an epic power struggle behind the scenes of this magnificent spectacle. Blackbeard squeezing his way through corridors attempting to avoid the encroaching usurpers of his long held power while attempting to redirect the prison's focus to the Roman. Our storyteller, for his part, quickly finds a groove in the story of Zama King, a young man who came seemingly from nothing to rise to the role of royal advisor in a war between factions. The literal captive audience is rapt by his tale, as it reflects either their own realities or - more likely - their own criminal aspirations, sending them into frequent trancelike accompaniment, stunningly executed and kinetically accomplished.

Celebrating the role of storyteller as his words captivate a crowd that was once baying for blood, Night of the Kings explores the ability of narrative to change reality. Reflecting upon what seems like an autobiographically inspired tale of a young hoodlum making it big, and transforming him into an almost supernatural being birthed into destiny, guided by forces stronger than nature, Lacôte's Roman whips la MACA into an ecstatic frenzy, diverting their attentions from the demise at hand, and deeper into the story being told.

By augmenting Roman's narrative with blissfully evocative eruptions of song and dance, Lacôte's film becomes much more than a story, but an embodiment of the form and the way in which words and imagery can carry us away. Taking place over the course of a single night, the inmates at MACA somehow manage to never tire, the adventures of Zama King giving them life as they whip through the prison's open yard like the wind, unsettling the ground, and revitalizing one another with their own motion.

In his feature debut, Bakary Koné delivers an expertly crafted and pitched performance. His arc from terrified new blood to the conductor of a symphony that may ultimately lead to epiphany for an entire population is remarkable to watch. There's no bluster, but there is tremendous power in his eyes and in his words. At once empathic, desperate, confident, and confused, his Roman is the fulcrum about which la MACA spins for this one fateful night, and the young actor nails every moment he's on screen.

Cinematographer Tobie Marier Robitaille captures the beauty of the prison's grime with as much reverence as his camera and lighting trace the glistening bodies of the dancers sliding across the floor. The darkness of night is expertly punctuated by the glitter of a transgender prisoner's glittery costume; shadows overwhelm the corners in la MACA, but the light seems to always know exactly where to breakthrough to evoke the maximum amount of energy in the motion of the men and their words and songs.

Frequently throughout the film, Roman's narration is swept away from his mouth and into the songs of his audience, as they finish his thoughts through motion and verse, as though the story was always there, just waiting for a voice to get the waters flowing again. The whole film, and the lives of these prisoners sat languid before Roman began his story, and now that the story has begun, it seems it may never end.

The narrative of the film, such as it is, is significantly more straightforward, though no less artfully executed. Blackbeard and his advisors struggle to maintain balance for just a little while longer as the usurpers close in, Tientcheu's performance as the ailing boss carries a silent power that radiates, even as the character moves with deliberate pace, sucking on an oxygen mask to stay upright. In the end, the night has roused such passion that an explosion is inevitable, and the inciting event lights a keg that will leave the prison changed, perhaps forever. Meanwhile, all of this is observed dutifully by the iconic grizzled visage of Denis Lavant (Mauvais Sang, Holy Motors), who acts as a sometime advisor, but knows he's not in his own world.

Night of the Kings is a film resplendent with a passion for the art of expression in all its forms. Artful, but never tipping its hand all the way into artsy, the film's seamless transitions from straight narration to song and dance, to increasingly fanciful flashback, to full on fantasy consistently leave the audience breathless. An impressively audacious testament to the fluidity of the medium, Night of the Kings is a peerless work that will be difficult to beat this year or any other.

Night of the Kings

Do you feel this content is inappropriate or infringes upon your rights? Click here to report it, or see our DMCA policy.
Philippe LacôteIssaka SawadogoSteve TientcheuRasmané OuédraogoBakary KonéDramaFantasy