STEEL RAIN 2: SUMMIT Trailer: This Is My Submarine! 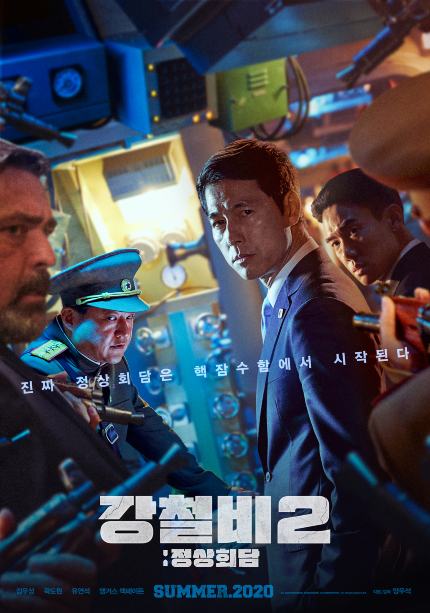 As if reality hasn't been sufficiently harrowing, especially over the past few months, Steel Rain 2: Summit proposes that the leaders of North Korea and South Korea meet with the leader of the United States to hammer out a proposal for peace on a nuclear submarine.

What a surprise: things go wrong!

The film is a sequel to a film based on a webtoon by director Yang Woo-suk (The Attorney), as explained by our own Pierce Conran in his Steel Rain review, published in December 2017, which was generally favorable, noting: "For the right viewer, Yang's latest pushes all the right buttons and even the rest of the audience should find at least a few elements to keep them in their seats."

The new film sees the return of leads Jung Woo-sung and Kwak Do-kwon, who topline the cast with Angus Macfadyen as U.S. President Smoot (?!). The sequel is set around "a summit of leaders of South Korea, North Korea and the U.S., where they intend to discuss North Korea's nuclear issue and a peace settlement for the Korean peninsula, but instead end up being abducted."

If the premise and the trailer look risible to some people, myself included, I think it's likely that the film itself will play as more of a straight action film of the blockbuster variety. It gained release in South Korea in late July and is headed for release in Hong Kong cinemas on September 24.

The trailer, which you can watch below, is very entertaining. I just hope it's not accurate as to what the future holds.

Do you feel this content is inappropriate or infringes upon your rights? Click here to report it, or see our DMCA policy.
Angus MacfadyenJung Woo-sungKoreaKwak Do-kwonSouth KoreaYang Woo-suk