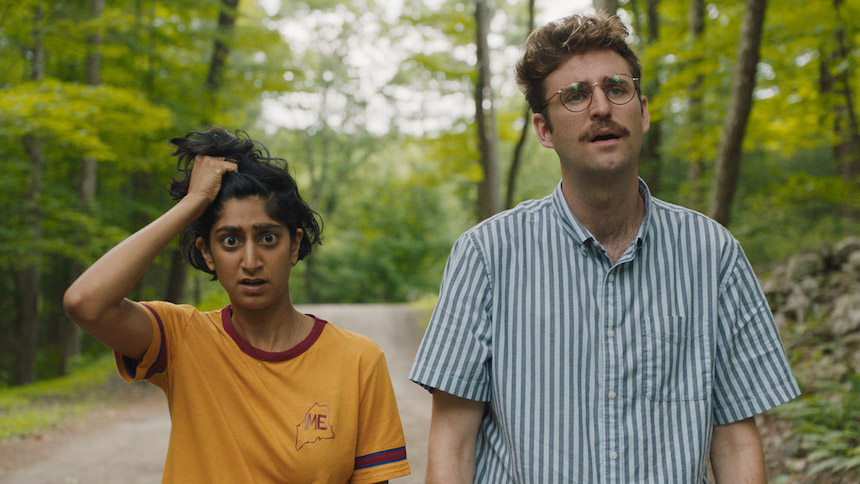 I do love weird sci-fi. Especially what is often termed lo-fi sci fi, those films that use either little or no special effects, and are far more about how humans deals with really weird shit happening (other examples being The Vast of Night and The One I Love). And Save Yourselves! looks like a winning combination of people caught in a situation they are not prepared for, while dealing with their own run-of-the-mill human problems.

Jack (John Reynolds) and Su (Sunita Mani) are a hip Brooklyn couple who, like many of their friends, find themselves dependent on technology and unable to put down their phones. Fearing their mindless scrolling may impact their connection with each other, they seize the chance to head to an isolated cabin in the woods, vowing to unplug from the outside world for a week. Sheltered from texts and push notifications, they are blissfully unaware that the planet is under attack. As strange events unfold, the couple must figure out a way back to civilization—or what’s left of it.

According to the Sundance 2020 review of our critic Mel Valentin, "With a nearly irresistible premise - an alien invasion set against our potentially destructive obsession with immersive tech - and casually winning performances from Sunita Mani and John Reynolds as an urban, thirty-something couple on the brink of actual performances - Save Yourselves! scratches an extremely particular itch few moviegoers even knew they had, but once that scratch has been discovered, they'll happily do whatever's necessary to obtain a small measure of satisfaction."

Set for release in theatres on October 2nd and VOD October 6th from Bleecker Street, this looks like the kind of fun, refreshing, oddball film that we need right now. (Also, my cat's name is Pouf, so I'm going to pretend that's her in the film). Check out the trailer below.

More about Save Yourselves!