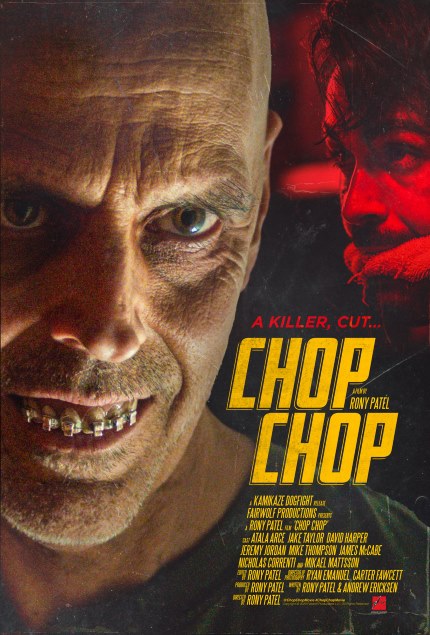 The spooky season is upon us, and while many of the bigger horror films have decided to postpone theatrical releases in the wake of an uncertain future, VOD horror is alive and well. The latest film to toss its ring in the hat is Chop Chop, a classic slasher from first time feature producer/director, Rony Patel. Teamed up with writer Andrew Ericksen (Toxicity), Patel's debut looks like a very dark throwback to the mean spirited hack 'n slash films of old.

While the writer and director may not have a ton of credits at the moment, their production company, Kamikaze Dogfight, has a pretty solid track record of bringing new talent onto the scene. Co-founded by genre vet Andrew van den Houten (The Offspring, The Woman, The Ranger), Kamikaze Dogfight has partnered with Gravitas Ventures to get Chop Chop to VOD audiences this October 20th through iTunes, Amazon Prime Video, and most of your other choice VOD services. Check out the synopsis and trailer below to get a taste of what Patel and team have cooked up.

An innocent night between a young couple takes a bizarre turn when a psychotic serial killer comes knocking at the door. As the couple starts to fend for their lives, we soon learn there might be more to the lovers than meets the eye. A long fight for survival leads them into a series of unsettling encounters within the criminal underworld.

And a few more details and testimonials from van den Houten and Gravitas Ventures' Nick Royak:

Chop Chop Invades Home Video for Halloween
Rony Patel's Debut Film Delivers a Delicious Terror
Rent or Buy on iTunes and Prime Video October 20th
Los Angeles, CA – Kamikaze Dogfight in partnership with Gravitas Ventures, a Red Arrow Studios company, has announced the Digital HD and Cable VOD launch of Rony Patel's debut slasher Chop Chop.  An ordinary pizza delivery leads to a night of chaos when a murderous psychopath targets a young couple who might be harboring a secret of their own.  Chop Chop will be available to rent or own October 20th on Amazon, iTunes, Comcast, Spectrum, Vudu and more.
Atala Arce and Jake Taylor star as the young couple whose attack by a murdering psychopath is only the beginning of a very dangerous night.  Chop Chop was directed and produced by Rony Patel, from a script he co-wrote with Andrew Ericksen.
“We are so proud to be launching Rony’s debut feature.  It’s exactly the kind of energy, style and storytelling that Kamikaze fans will appreciate and want to see more of,” said van den Houten, partner Kamikaze Dogfight.
“Our team is always excited when Andrew and Han identify budding genre filmmakers. That excitement is certainly stoked with Chop Chop and we are happy to launch Rony Patel into the fray,” said Gravitas Ventures Acquisition Manager Nick Royak.