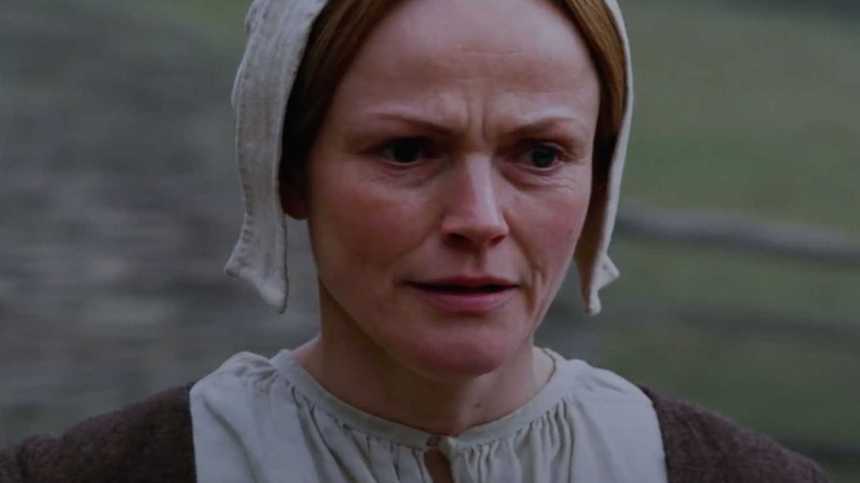 It's the 16th century, after the English Civil War, and Fanny Lye (Maxine Peake, Black Mirror) lives a relatively bleak existence, married to a much older man, John, who basically bought her (Charles Dance, Alien III), on a remote farm, with their son. One day they discover a couple stashed away in their barn, Thomas and Rebecca (Freddie Fox and Tanya Reynolds). After at first welcoming them, Thomas turns the tables, to avoid being captured by the authorities. It's then that the family is subjected to some cruetly, while Fanny is also 'seduced' by the couple's new ideas on freedom of thought and being.

What sounds like an interesting premise for Fanny Lye Deliver'd, written and directed by Thomas Clay, sadly becomes a rather predictable story that revolves around sex being the tool for a woman's emotional and intellectual awakening. Must it always be so? Can't we just try some conversations? Despite a great lead actor, the film's look and plot belie the work put into it, as it is neither shocking nor particularly original.

Certainly, we tend to take for granted the revolutionary moments of the past, especially ones of thought, when they happen to groups that are still marginalized, or when they involve moments of revelation that might seem too obvious to us today. For someone like Fanny, who grew up in servitude and is essentially married to her 'owner' who is abusive to her and her son, as all men have been, to be able to actually enjoy any physical touch, let alone make a decision for herself and not be called a harlot (a catch-all term for any woman who thinks for herself), is a revelation.

However, to have everything dictated to the audience takes away from the joy of discovering these moments with the protagonist. Which is what happens in this film, as the voiceover narration provided by Rebecca takes away any mystery, any moment given to us by Peake in her performance, instead treating the audience as if they need to constant guidance to understand what's happening. It's exceedingly frustrating, as if the feeling like all the actors are in a different film - Dance in a period drama, Fox in a contemporary erotic music video, Reynolds as if she just wandered off the set of her TV show Sex Education. It all makes Fanny's revelations reduced to her finally having an orgasm, while everything about her attitude towards her society and religion as a mere footnote at the end.

And that's the crux of the problem - in theory, I can see why Fann's story is one that is interesting to know about,m and Peake is doing her best with what should be good material. But all the actors are not only in different films, they're all giving different performance levels. This inconsistecy, combined with the predictable story, and rather poor colourization (it looked on the verge of bad video) made for an uninspiring film, especially when the most interesting part of Fanny's story - what she did with her newfound understanding of her world - was merely part of concluding voice over.

There was a lot of potential in the idea of Fanny Lye Deliver'd, and a cast that should have been more conhesive and consistent. It's disappointing that the end result was far less than the sum of its parts.

Do you feel this content is inappropriate or infringes upon your rights? Click here to report it, or see our DMCA policy.
Thomas ClayMaxine PeakeCharles DanceFreddie FoxTanya ReynoldsDramaHistoryThriller