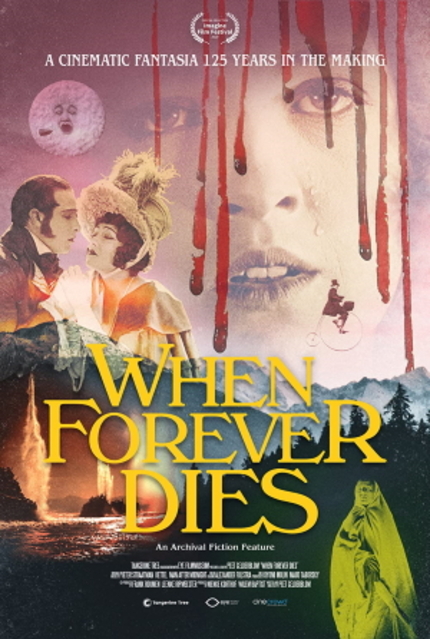 When the current pandemic started showing its teeth in the Netherlands in March, it meant the end of the 2020 edition of the Imagine Film Festival Amsterdam, as that was planned in April. Now, almost half a year and lots of re-scheduling later, Imagine managed a re-start of sorts in a slimmer (and partly on-line) form. And lo-and-behold: even in these dire circumstances, the festival manages to show two world premieres, one of which is Peet Gelderblom's collage film When Forever Dies.

Comprised entirely out of clips from old films, shorts, and adverts, this "archival fiction feature" (as Gelderblom himself calls it) tells the story of "forever man" and "forever woman", who meet and fall in love. But soon, stereotypes and expectations clash, resulting in anger, resentment, abuse and even murder. Will the "forever love" of the man and the woman turn into a neverending battle of the sexes, or is there hope for something better?

Director Peet Gelderblom is no stranger to editing and rummaging around in other people's materials. His award-winning short Out of Sync used the clever trick of having the images and sound run out of sync on purpose, thereby inventively changing the meaning of the images you saw. His on-line series Pretty Messed Up also turned heads with the ingenious editing and juxtapositioning of extremely differing film clips. And his fan-edit of Brian De Palma's Raising Cain, a reconstruction based on De Palma's original script, turned out to be SO GOOD, that it received De Palma's blessing as a superior version, and has been put on the recent Blu-ray releases (by Shout! and Arrow) as a "De Palma's Director's Cut".

For When Forever Dies, Gelderblom had access to the movie archive of the Eye Film Museum in Amsterdam, which houses over 125 years of celluloid history, including several famous collections of unique materials. The end result is a wild mix of footage famous and unknown, live-action and animation, drama and documentary, black-and-white and color, old and n... well, less old, silent and sound... it's often bewildering and hypnotizing, and sometimes very, very funny.

There are a few pitfalls with this type of movie though, and Gelderblom can't avoid all of them. For some scenes he uses long takes from famous films, like Carl Theodor Dreyer's silent classic The Passion of Joan of Arc and Benjamin Christensen's eclectic Häxan: Witchcraft Through the Ages. The use is not sacriligious, and Peet Gelderblom's reverence for these titles is evident, but these shots do take you out of the story, and sometimes make you wish you were watching the original source instead. Also, the final message isn't really all that groundbreaking, and at 109 minutes, it outstays its welcome a bit at some points. I'm tempted to say "When Forever Dies could use some editing". But that would be a bad joke; the film and its length are obviously the result of a massive labor-of-love by an editor who is devoted to cinema.

All in all I was intrigued and entertained. And it does instill a terrifying truth that there is still so much footage, be it of classics or of obscurities in hidden vaults worldwide, that I haven't seen yet and maybe never will...