Review: MAX WINSLOW AND THE HOUSE OF SECRETS, Beware of Hosts Without Bodies 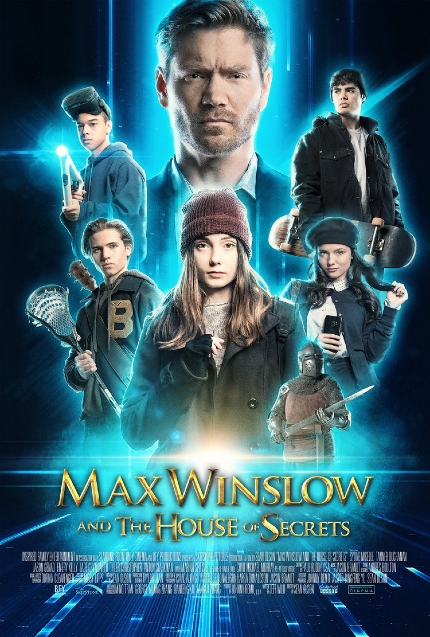 I'm going to tell you a secret, even if you've already guessed what it is.

Max Winslow and the House of Secrets
The film will be available on DVD, live stream via Amazon and in limited theatrical release on Tuesday, August 25. Visit the official site for more information.

Mostly painless by design, Max Winslow and the House of Secrets retains a potent bite whenever Sydne Mikelle appears on screen.

As the inherently rebellious and independent Max Winslow, Mikelle fits squarely into ready-made stereotypes. She is a bright-minded, modest, and non-conforming teenager raised by her single mother since childhood, determined not to make the same mistakes made foolishly by other people, including her father and her classmates at a high school in Bentonville, Arkansas.

Nestled in the gorgeous northwestern region of the state, the school is home to other stereotypical personality types as well, such as a handsome, boorish athlete, Wade (Tyler Christopher); a socially awkward boy obsessed with games, Benny (Jason Genao); and a girl obsessed only with her own popularity, Sophia (Jade Cynoweth). These three, along with the brilliant loner, aka the titular Max, and a talented musician, Connor Lawson (Tanner Buchanan), are selected for a contest announced by reclusive local billionaire Atticus Virtue (Chad Michael Murray).

Virtue appears in the form of a hologram to the school's students one day, smugly telling everyone that if one of the five students selected solves a mystery that night, the winner will inherit Virtue's mansion the next day. Of course, only a fool would assume that diabolical conditions would not be involved at some point.

Indeed. The film's opening sequences are (probably) intentionally reminiscent of Roald Dahl's novel Charlie and the Chocolate Factory, first published in 1964 and brought to the screen in 1971 by director Mel Stuart. That film integrated musical numbers into the story of five children on a fabulously sweet tour, with an unexpected prize awaiting the unsuspecting winner.

In somewhat similar fashion, the five young people in Max Winslow and the House of Secrets are mostly unpleasant, save for Max and, as the story develops, Connor, whose musical talents are heard throughout the tour of a house that is meant to be scary rather than sweet. Rather than Willy Wonka (or even Atticus Virtue), the house has its own built-in host and tour guide, known as Haven (voiced by Marina Sirtis), its mysterious, hidden agenda powered by artificial intelligence. As the tour progresses, each teenager is tested by Haven and threatened with dire consequences.

Given that the film is rated PG, which in the U.S. means that "parental guidance is suggested -- some material may not be suitable for children," it's reasonable to assume that none of the 'dire consequences' will prove to be too serious and truly dangerous, though a couple of them come across as urgent, especially in the case of Max.

As a teen who is not as typical as she first appears, Sydne Mikelle captures a broad range of inner turbulence and conveys that through small yet perceptible changes in her facial gestures and body language. The other actors portraying the teens are perfectly fine, it's just that Mikelle is even better than that, which is good, since she is playing the lead role.

Individual segments of the film are well-polished and imaginative in the variety of their complementary designs. The life lessons may not be particularly dramatic or surprising for jaded adult viewers, such as myself, but Max Winslow and the House of Secrets should play better to younger audiences who are still receptive to the idea that a movie can have something more on its mind than cheap thrills.

Do you feel this content is inappropriate or infringes upon your rights? Click here to report it, or see our DMCA policy.
Chad Michael MurrayMarina SirtisSean OlsonSydne MikelleTanner BuchananUS