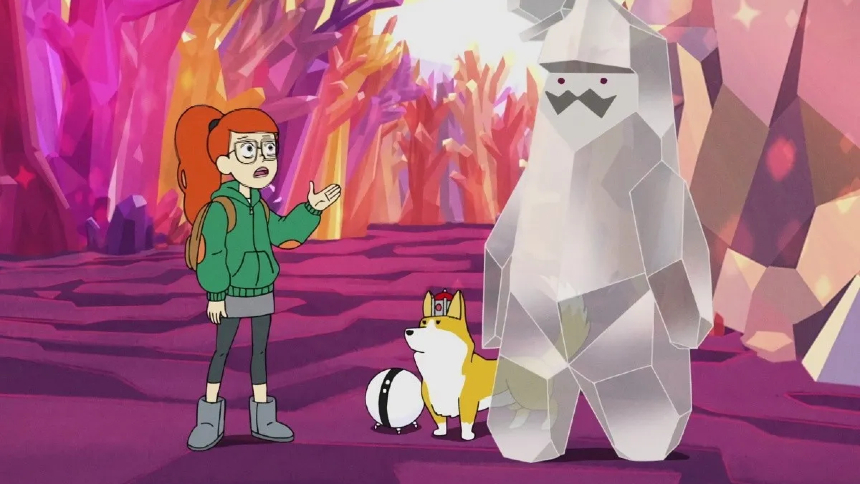 We've all been childish. Some of us are still children. That's not a bad thing.

Infinity Train
The first two seasons of the series, originally broadcast on Cartoon Network, are now streaming on HBO Max. The first five episodes of the third season began streaming exclusively on HBO Max on August 13, 2020, with the remaining episodes due to premiere on August 20 (aka today) and August 27.

How do you quantify joy?

Some six weeks ago, I expressed my frustration with HBO Max as a streaming service due to its unavailability on Roku devices -- or Amazon Fire devices, too, come to think of it. As I noted: "The only way I can watch HBO Max is on my laptop and/or hooking it up to my television via a long cable, which kinda defeats the purpose of owning a television that's hooked up to the internet, and also makes the service clumsy, if you like to sample different shows, as I often enjoy."

On the verge of canceling the service last weekend, I agreed to sample it for another month because it was offered as part of a renewal package for my cable service (old school, to be sure). And I did something I should have done weeks or months ago: I spent US$30.00 and purchased a Google Chromecast, a small device that hooks up to an HDMI outlet on my television, which allows it to receive source material from certain authorized apps on my iPhone, including HBO Max.

Gadzooks! It works, and it allows me to use my cell phone as a remote control for HBO Max, which is not as simple or intuitive as a dedicated remote control, but it does the job, allowing me to watch the service without connecting a long cable. The service features quite a good number of TV shows and movies that fall into categories that are personally appealing: indie, international, and animated fare chief among them.

Thus, it was much easier to sample Infinity Train last weekend, then keep sampling subsequent episodes, then add it to my watchlist, and then to binge half of the first season earlier this week.

Created by Owen Dennis (Cartoon Network's Regular Show), the series follows a young teen girl named Tulip, who stumbles onto a mysterious train that is made up of train cars that are each worlds unto themselves; each car, or world, is wondrous and mysterious and utterly delightful, for the most part, except when it's not, which is entirely intentional.

I should say, the first season follows Tulip, while the succeeding two seasons (so far) revolve around new characters on their adventures in many different worlds. I've only watched the first season so far, composed of 10 episodes, each running 11-13 minutes. What makes the show so appealing to me, an adult in late middle-age without children, is the genuine wit, the endearing characters, and the sneaky adventures.

I say sneaky because the episodes are teaching children lessons without lecturing or hectoring. Tulip is angry at her parents, who are still figuring out their lives after a recent divorce. A mix-up in scheduling may be befuddling to the parents, but it's absolutely devastating to Tulip, who is caught in the middle of their difficulties and just wants to go to summer camp to forget about her troubles.

Tulip denies all this, of course, which is not uncommon for anyone during their younger years when faced with any sort of major disruption; she can't even begin to put her feelings into words or take action to dispel those feelings, except to run away and leave them all behind.

Infinity Train understands what it's like to be young, and what it feels like to not know what to do. Yet it never talks down to its audience, and is never insulting. It respects and tolerates words and actions that might otherwise seem impertinent or insulting on the part of Tulip. She's hurting, and she wants, and deserves, to feel better about herself and about her life.

Picture all that spirited thinking going on behind the scenes, and in the mind of Tulip, as a dazzling series of adventures unfold, each in a new world, as Tulip ever seeks to move forward, both on the Infinity Train and in life. It's funny, too! I love this show.

Do you feel this content is inappropriate or infringes upon your rights? Click here to report it, or see our DMCA policy.
animationCartoon NetworkHBO MaxOwen Dennis