Marco Beltrami's DRACULA 2000 score to be released on compact disc 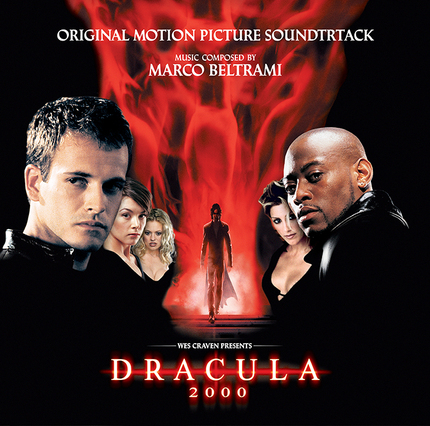 What would Dracula be doing in a pandemic time like this? Could he be streaming content or maybe the Count would be a nostalgic consumer of physical media; if Bram Stoker creation lived in this time and age there would be a lot of options for him as there are for us. Like the music score that Academy Award-nominated Marco Beltrami wrote for that character's incarnation unleashed to the world in the beginning of this millenium by Wes Craven and co.

Varèse Sarabande Records has announced the upcoming CD release of Dracula 2000, the limited edition soundtack will be released on July 24, as a standalone record for the first time ever—with only 1,000 copies available. Dracula 2000 made its official CD debut in Varèse Sarabande’s sold-out 2016 box set, “Little Box of Horrors.”

The album was mastered by James Nelson from sources provided by Marco Beltrami himself whom has become one of the most prolific Hollywood composers in the last 20 years, working such diverse films as 3:10 to Yuma, The Hurt Locker, World War Z, Ben-Hur, Logan and A Quiet Place. The CD booklet includes extensive liner notes by film music journalist Daniel Schweiger.

Dracula 2000 is a loose reinvention of the classic Bram Stoker novel with a screenplay by Joel Soisson, with uncredited work by Ehren Kruger and Scott Derrickson. The film was directed by Patrick Lussier, a longtime colaborator of Wes Craven, who did the executive production on the film and lend his name as a presenter. Gerard Butler starred as the titular Dracula in his first leading role.

This upcoming release is already available for pre-order on varesesarabande.com
Sign-In to Vote
Tweet 0 Submit

Do you feel this content is inappropriate or infringes upon your rights? Click here to report it, or see our DMCA policy.
compact discfilm scorelimitedmarco beltramiphysical mediareleasesoundtrackwes craven