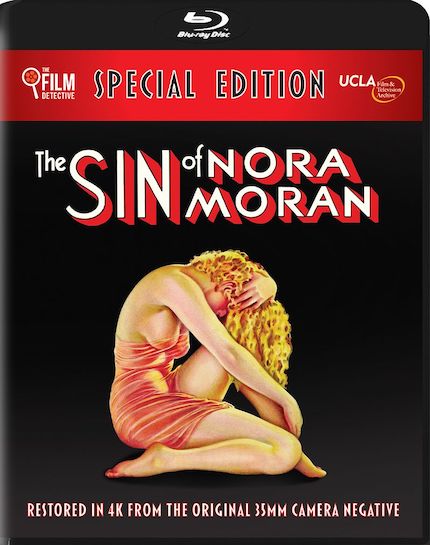 Out this week from The Film Detective comes The Sin of Nora Moran, a 1933 pre-Code, Poverty Row film directed by Phil Goldstone (also known as the producer of Gun Shy and Tarzan Escapes, among many others).

The Sin of Nora Moran is one of those "fallen women" stories that Old Hollywood was once known so well for, featuring an unmarried lady, who, by no fault of her own, attempts to be self-sufficient and obtain gainful employment. She finds a job after much difficulty, as well as romance, but at an extreme cost.

Starring Zita Johann (1932's The Mummy, playing opposite Boris Karloff, Tiger Shark) as Nora Moran, the film at first opens on an upset woman, Edith Crawford (Claire Du Brey, 1934's Jane Eyre) who's found love letters from a mistress to her husband, the newly appointed governor Dick Crawford (Paul Cavanagh, 1953's House of Wax). She meets in a fury with her brother, District Attorney John Grant (Alan Dinehart, Charlie Chan at the Racetrack) on what to do with these letters, and this woman.

For awhile, they discuss the matter, and the entire story is told in flashback. Nora is adopted as a child, and about seven years later, her parents get into an accident in which we see the car drive off a cliff, or what is probably U.S. Interstate 1 in California. Nora's inheritance is gone in short supply, and she heads to New York City to try to get a job dancing.

Eventually, she lands a gig at a circus run by the slimy Paulino (John Miljan, The Ten Commandments, M). The introduction to his character is one of the wildest, most dangerous I've ever seen --- at the circus, he's in the ring with a lion, actively slapping it and provoking it to bite and attack him. (For more dangerous lion encounters, check out Roar.)

Paulino overpowers and rapes Nora while she's trying to flee the circus, director Goldstone cutting from Nora's mouth, about to scream to a wide shot of the train, the whistle screeching. There are also lots of other very interesting editing and narrative choices in the film --- flashbacks but with time displaced and overlayed, as well as a cool, surreal scene which features Nora's floating head speaking to her governor lover as he anguishes over whether to pardon her.

Paulino doesn't escape punishment, either. Rotten through and through, he attempts to blackmail Governor Crawford after he romances Nora and has rented a house for her --- at the same time that the D.A. tries to pull the couple apart for scandal reasons, back when that mattered. In fact, Paulino is killed in an altercation and Nora is sentenced to the electric chair for it after she confesses.

However, The Sin of Nora Moran is an appropriately misleading title. Nora happens to be such a good soul, and so in love, that she takes the blame for the murder. See, you can't be both unmarried AND sleeping with another woman's husband back in 1933, pre-Code or not, without major moral and life-death implications. You must die for that. In this case, The Sin of Nora Moran is an interesting and absorbing social relic, written, acted, and directed very well.

I enjoyed the booklet and featurette, learning about the film and its star Johann, who chose to leave Hollywood after just eight roles at the height of her fame. I'd have loved to see a featurette wherein a critic delves into the sociological elements of the story and how it played back in 1933.

The new 4K restoration via UCLA is great. There are flickering elements, as well as scratches and dust particles, but on the whole, the film, considering its age, looks beautiful. Sounds decent, too.

Oh, and if the illustration on the Blu-ray cover looks somewhat familiar, it's because it was created by Alberto Vargas, one of the more famous cheesecake/pin-up illustrators back in the day. I'm willing to be that the poster was painted before The Sin of Nora Moran was cast, as the woman on the cover is a blonde, and Johann was brunette.

Speaking of Vargas, The Film Detective is doing a cool Willy Wonka-type giveaway with a gold certificate sealed in one of the limited-edition Blu-rays:

"The winning ticket holder will receive a framed, 27” x 41”, hand-pulled lithograph of the film’s original poster by painter Alberto Vargas, deemed one of the most iconic posters in film history. Printed on Coventry 100% cotton archival paper with the finest quality archival ink using a rare, antique German Dufa printing press, by Society Ltd. (1999), the poster comes with a certificate of authenticity."

Intrigued? Order the Blu-ray (or DVD) and check out the trailer for this release at The Film Detective here.

The Sin of Nora Moran