Bacurau- A Brazilian film which resonates with Indian audience 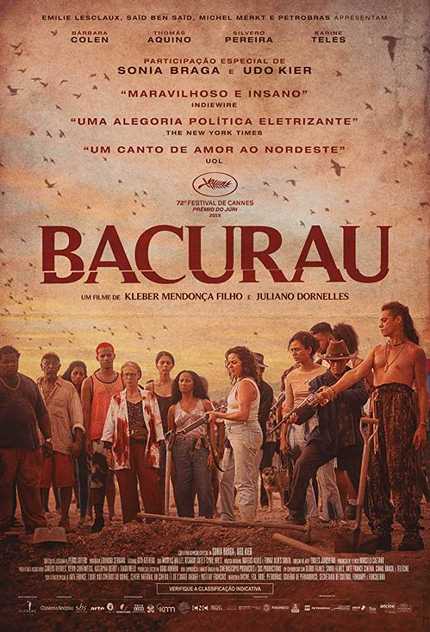 Bacurau is a weird western film set in Brazil. Weird in the sense it does not have the usual feel of a western where there are action sequences more than dialogue. What is even more weird is that the film completely relates to the plight of rural Indians as well.

Bacurau is a fictional town created by the directors so that they could relate to all the rural Brazilians in the country. The film was screened at Cannes and even got critical acclaim for it. But the film is more than just a political commentary on Brazil. It talks about the plight of every third world country’s rural population and in that sense I could even say it could be felt by the world.

The film starts with the death of a matriarch which almost never exists in the world apart from a few tribal communities in the world. But it happens in Bacurau and with her death comes a testing time for the village. The biggest problem which they face is the lack of piped water supply from the nearby dam much like any other village in India. The village is close knit and everyone looks out for each other and the place has a rich history with its own museum.

More problems come when they find out there are a few strangers in the village. With these strangers comes murder and the place has become really violent so much so that a kid of about 7 years old also dies. Now we come to know that these strangers are Americans who are here so that they could brandish their vintage weapons and also kill people for fun. This is more like an allegory about the intervention of first world countries into poorer countries so that they could do as they please.

The Americans are also very relatable to what’s happening in America where stupid people are thriving right now. In one shot when two people are speaking Portugese one American says “please don’t speak Brazilian here”, this just goes on to say that the people who are here don’t care about anything so much so that they don’t even know that brazil people speak portugese. They also talk about white superiority when one character who is a Brazilian says “I am like you people”, telling them that he has white blood in them. One of the American says “ You don’t look like us, you are not white”.

On the other hand you have Bacurau where there are rebels against the Brazilian government much like people in the Chambal valley where they think that they are doing what's good for the village and for themselves and the villagers respect them. These so called rebels come into the village to help the villagers. Bacurau also has a history of rebelling against the government even before the independence of Brazil from Portugal. The Americans underestimate them and think that they are just innocent villagers. The villagers use their wits and kill all the Americans except one whom they decide to seal in an underground bunker and bury him alive.

The film ends when the Mayor of the district comes to pick up the Americans thinking they had killed the villagers. This just goes on to show that the political masters who are supposed to protect the local people are killing them for the sake of their own greed and power just like the political masters in India.

The movie also has references from famous directors like John carpenter and Quentin Tarantino. Although the directors have not yet mastered the level of tension that Tarantino creates when shooting a violent scene, they did a commendable job. The movie goes onto show the pain of the local people which can be related to any oppressed community and their injustice towards them and that’s why it caters to the global audience and not only to the people of Brazil.