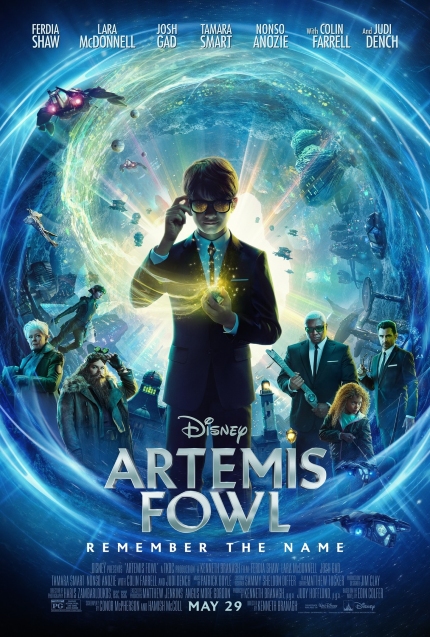 To paraphrase a line of dialogue from Kenneth Branagh's unfortunate film adaptation, Artemis Fowl sounds like two hippos with a throat infection, grunting at each other.

The self-described "hippos" are portrayed by Josh Gad and Judi Dench, each earning their paychecks with as much gusto and dignity, respectively, that they can muster. First published in 2001, the young-adult fantasy novel by Eion Coifer began a series of adventure books by the author that have sold many, many copies to eager readers around the world who will possibly prove to be the only audience that is eager to see the woebegone film version.

Director Kenneth Branagh brings longtime collaborator Judi Dench along for the ride as Commander Julius Root, a fairy in command of a large underground army, which is where the fairies, the elven, the trolls, the gremlins, and other legendary creatures reside, hidden from humans until they surface in order to track down Holly Short (Lara McDowell), an elf who wants to clear her late father's name.

The story proper is introduced with the disappearance of Artemis Fowl (Colin Farrell), a wealthy adventurer who lives on a gigantic estate with his son, Artemis Fowl II (Ferdia Shaw), and trusted bodyguard Domovoi "Dom" Butler (Nonso Anozie). Father Fowl has been kidnapped by a mysterious, hooded figure, who insists that 12-year-old Junior Fowl locate a valuable artifact that his father was ...

Well, it doesn't matter, really. Junior is soon off on the adventure, which moves hither and yonder through a playground of visual effects and resembles an irritating young child chasing a rapidly-deflating balloon. Josh Gad, whose increasing screen presence continues to puzzle me, mirthlessly narrates the action with a growling voice, for some unfathomable reason, and is, I suppose, meant to provide comic relief -- spoiler: he doesn't -- as he portrays a large-sized dwarf.

I don't doubt that Dench, Gad, Farrell, Anozie, and the rest of the cast did their level best to bring life to their roles, and there's no doubt that the lovely scenery and the extensive effects supply a measure of distraction from the nonsensical nature and sheer awfulness of the story, which is a fine credit to all the crew-people involved.

Reportedly, Ferdia Shaw is the grandson of the late, great Robert Shaw, which speaks to his fine heritage, which may become more apparent if he remains in the entertainment business. That's of greater interest than the film itself, which is, unfortunately, quite lifeless and joyless and devoid of much entertainment value.

Combined with its lack of a cohesive narrative, that makes Artemis Fowl a curiously lackluster affair, even with expectations lowered. I'm just glad that my subscription to the Disney+ streaming service, where the film is now streaming, features a lot of good cartoons.

Do you feel this content is inappropriate or infringes upon your rights? Click here to report it, or see our DMCA policy.
Colin FarrellDisneyPlusFerdia ShawJosh GadJudi Dench