MONEY PLANE Trailer: Casino in the Skies Above, Ripe for Robbery 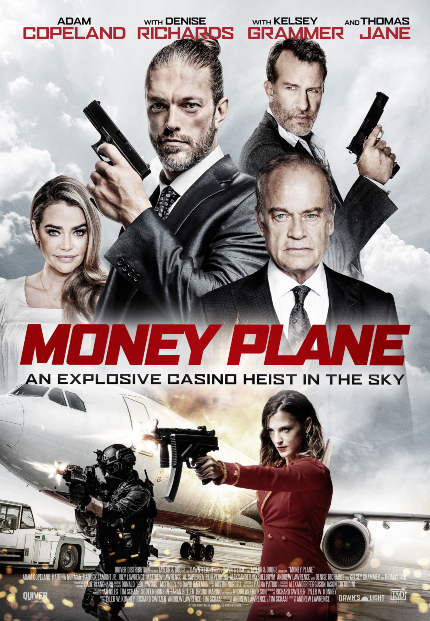 Embracing its risible premise with admirable intensity, and only one eyebrow raised, Money Plane aims to defy gravity by sending a gang of robbers into the skies at the behest of Kelsey Grammer.

Heading for release in July, Money Plane stars Adam Copeland as "a professional thief with $40 million in debt and his family's life on the line." To repay his debt to someone called "The Rumble" (that would be Mr. Grammer), the thief "must commit one final heist - rob a futuristic airborne casino filled with the world's most dangerous criminals."

I confess that I am entirely unfamiliar with Mr. Copeland's work with WWE, but he and his gang are surrounded by experienced actors, especially Grammer and Thomas Jane, which lends the project a welcome degree of rowdy authenticity. The cast includes Denise Richards, Katrina Norman, and Patrick Lamont Jr. Andrew Lawrence wrote and directed; he's the younger brother of actors Joey Lawrence and Matthew Lawrence, who also appear in the film.

Money Plane will be winging its way to release on Digital and On Demand on July 10, 2020. Watch the trailer below.