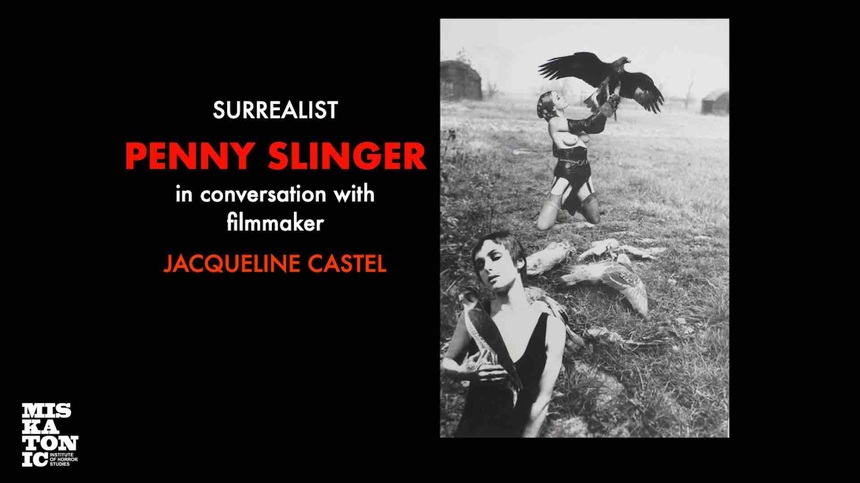 Just because we have to keep up with social distancing (which we do so please wear a mask when not at home, don't touch your face, wash your hands often, and keep 2 metres away from others), doesn't mean we can't keep learning! With that in mind, one of our favourite educational spots, the Miskatonic Institute of Horror Studies has announced that they will be rolling out some archival classes online.

Some of these amazing classes include a talk with experimental artist and filmmaker Penny Slinger, a masterclass with exploitation filmmaker Pete Walker, and the incredibly popular panel examining the work, and racism, of H.P. Lovecraft.

In addition to this exciting news, Miskatonic has also annouced that the Los Angeles branch will now be under the co-direction of Graham Skipper and Amy Voorhees Searles. You couldn't ask for two better horror aficionados to steer the California ship.

More details in the press release below, including links to the classes. And while they are available for free, the Institute kindly asks for a donation (via paypal at miskatonicinstitute@gmail.com), and a portion of all donations through July 31 will benefit RAINN.The more you know!

The Miskatonic Institute of Horror Studies is the world’s longest-running educational organization dedicated to classes in horror history, theory and production, and currently has branches in L.A., New York, and London. While we take this time to prepare the Fall 2020 semester amidst the current lockdown regulations Miskatonic will be launching archival videos of classes online for by-donation access.

Released periodically over the Summer and viewable globally, the online roll-out will begin with confrontational artist Penny Slinger’s (An Exorcism, published in 1977) talk with filmmaker Jacqueline Castel at Miskatonic L.A. in December 2019. This will be followed by a Masterclass from British exploitation/horror filmmaker Pete Walker (Frightmare, Cool It Carol) moderated by Bret Berg of The American Genre Film Archive, and closing out with one of the most significant and celebrated sold-out events in the history of the Institute: THE SHADOW OVER LOVECRAFT: INTERROGATING H.P. LOVECRAFT’S RACISM - a panel of revisionist Lovecraft authors including Matt Ruff (Lovecraft Country), Victor LaValle (The Ballad of Black Tom), Ruthanna Emrys (The Innsmouth Legacy series) and longtime Lovecraft scholar Peter H. Cannon that took place at Miskatonic NYC in April 2019. The latter will be released in August, the same month that Jordan Peele and Misha Green’s hotly-anticipated series adaptation of Ruff’s novel Lovecraft Country premieres on HBO.
In addition, Miskatonic is pleased to welcome actor and filmmaker Graham Skipper and film historian Amy Voorhees Searles as the new co-directors of its Los Angeles branch, based at the storied Philosophical Research Society headquarters in Los Feliz.
Graham Skipper is best known from Re-Animator: The Musical where he played the iconic role of Herbert West, and on-screen from his leading roles in Joe Begos’ Almost Human and The Mind's Eye, and his directorial debut Sequence Break. He is also the founder of the celebrated Rated-R Speakeasy, an immersive movie-inspired pop-up bar and event series, which has quickly risen as a social hot-spot within the vibrant Los Angeles horror community.
Amy Voorhees Searles is an award-winning Senior Producer at Trailer Park, Inc and second-generation horror fan currently living in L.A., as well as co-author of the forthcoming book "Unhealthy and Aberrant”: Depictions of Horror Fandom on Film and Television.
"I am thrilled and honored to be stepping into this role alongside Amy,” says Skipper, “and look forward to building upon Miskatonic Los Angeles' already-strong foundation to provide the L.A. horror community with a home for learning, cultivating dialogue and ideas, and examining the horror genre we love in new and exciting ways."
"I have followed the growth of the Miskatonic Institute with great interest since its inception in 2010,” says Searles, “and was thrilled to finally attend classes when the Los Angeles branch opened in 2018. Becoming involved with the Institute is a dream come true, and I look forward to promoting education regarding the historically maligned and misunderstood genre that has proven so foundational to my life. I consider myself doubly fortunate to be working with Graham Skipper, a stalwart of the horror scene, who shares my commitment to giving back to the community we hold so dear."

Full details on the archival classes below:

In 1969 Slinger created her student thesis on the collage art of Max Ernst, which was a combination of written text, film and original collage work. “Having discovered the magic of surrealism,” she later wrote, “I wanted to employ its tools and methods to create a language for the feminine psyche to express itself. The kind of language that dove into the subconscious for images and wantonly combined them into situations and relationships that were both confrontational and expressive.” It was the beginning of an artistic identity that, while always evolving, frequently addressed themes of interior space, body horror, female sexuality and psychosis.

Penny’s work – from with her early student short films and first book of collage art, 50% The Visible Woman to her collaborations with filmmakers Peter Whitehead (Lilford Hall, 1969) and Jane Arden’s Holocaust Theatre troupe (culminating in the feature film The Other Side of Underneath, 1972), and her masterpiece of psychic trauma, the collage art book An Exorcism (1977) – was the spark for a new mode of surrealism focused on the female experience that would have ripples throughout the film and art worlds, though it would take many years for her pioneering influence to be acknowledged – something that has recently been rectified with Richard Kovitch’s illuminating documentary Penny Slinger - Out of the Shadows, which is available on VOD in North America now, at the links below:

Miskatonic is proud to present an evening in conversation with the great British horror and sexploitation director Pete Walker, moderated by Bret Berg of The American Genre Film Archive. This class originally took place on Thursday, May 9, 2019 in the main lecture hall at our Los Angeles host venue, the Philosophical Research Society.

Starting out in softcore sex shorts in the 1960s before turning to features in 1968 with films like The Big Switch, School of Sex, and his breakthrough, Cool It Carol! in 1969, Walker then self-financed a decade of brilliant horror and terror films including Die Screaming Marianne (1971), The Flesh and Blood Snow (1972), House of Whipcord (1974), Frightmare (1974), The Confessional (1976), Schizo (1976), The Comeback (1978) and House of the Long Shadows (1983), with the odd sexploitation film still peppered in, such as Tiffany Jones (1973) and Home Before Midnight (1979).
Walker’s work was often critically reviled in its day – even while being immensely successful commercially – although some astute critics did note their sophisticated subtexts, often dealing with double lives and the sadism of conservative authority figures who dole out various degrees of punishment to their younger, less repressed counterparts, who they see as vulgar or sinful. We’ll talk to Walker about being an upstart in an uptight industry, making a horror icon out of elderly Scottish actress Sheila Keith, turning communion wafers into weapons in The The Confessional , working with horror giants Christopher Lee, Peter Cushing, Vincent Price and John Carradine on House of the Long Shadows, his ill-fated Sex Pistols documentary, and so much more.


Date: Thursday, August 20, 2020 – 12:00 Noon PST
THE SHADOW OVER LOVECRAFT: INTERROGATING H.P. LOVECRAFT’S RACISM
There is no denying that H.P Lovecraft was a racist. Though racism was not uncommon in his day, and some have argued that this excuses his attitudes, his racism and xenophobia were especially vehement, even for his time. These attitudes are directly apparent not only in an infamous 1912 poem denigrating those of African descent, but in journal entries and personal correspondences, as well as both directly and allegorically in his fiction.

Often held as Lovecraft’s most racist horror story, The Horror at Red Hook was addressed, revised and reclaimed by writer Victor LaValle in his brilliant, multiple award-winning novella The Ballad of Black Tom in 2016, which reconfigures the perspective of the story to that of African American protagonist Charles Thomas Tester, which Locus magazine praised for “co-opting Lovecraft’s epic-scale paranoia into the service of a trickster tale.”

The same year saw the release of Matt Ruff’s novel Lovecraft Country, which similarly explores issues of race in Lovecraft’s work through its tale of an African American science fiction fan named Atticus Turner, traversing through New England during the heyday of the Jim Crow laws in search of his missing father.

The release of both of these books – coincidentally in the same week - prompted renewed questioning into the legacy of Lovecraft’s fiction for a legion of fans and fellow writers who have found magic in his Mythos and Cosmic Horror, easily one of the most influential strands of horror in literary history. But does Lovecraft’s racism overshadow his incredible contributions to the field? Should Lovecraft be demoted in the pantheon of horror writers based on his personal ideologies? Can people of those races and ethnicities Lovecraft directed hate towards still find value his work?