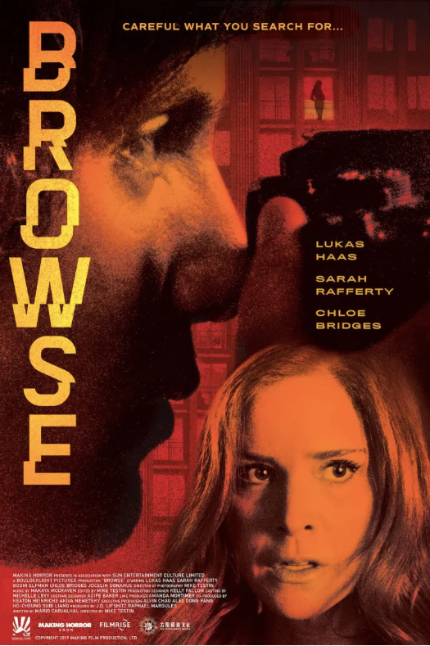 The thought of a creepy stalker as a movie hero stinks to high heaven. Yet the idea that Lukas Haas is portraying the protagonist in the upcoming film Browse is more inviting, in large part because of Lucas Haas' ability to embody complex characters who are deeper and more complex than they might appear from the outside.

Mike Testin (Dementia) directed the suspense thriller, which tells the story of Richard, the character played by Lukas Haas. In the official synopsis, he is described as "an introverted man who becomes convinced that his identity has been hacked after dabbling in online dating.

"Desperate for clarity, Richard seeks to uncover the truth of who is trying to manipulate him and why, but the more he struggles with his futile investigation, the further he's cast into an insurmountable web of paranoia that threatens to destroy his thinning hold on reality."

Throughout his career, Haas has tended to underplay characters, which is apparent in the trailer and leaves room for a lot of ambiguity and uncertainly about what, exactly, the movie will revolve around. Namely, is this fellow named Richard something far worse than he appears? Or, somehow, an innocent victim in a diabolical plot?

Browse is heading for release on July 7, 2020, via FilmRise. Watch the trailer below.

Do you feel this content is inappropriate or infringes upon your rights? Click here to report it, or see our DMCA policy.
Bodhi ElfmanChloe BridgesJocelin DonahueLukas HaasMike TestinSarah Rafferty