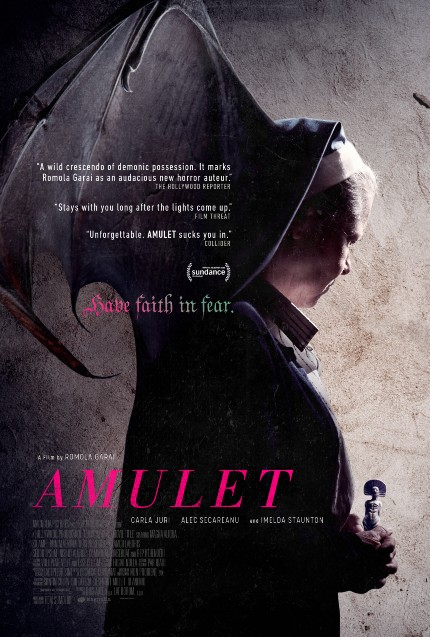 Some trailers give you pause. The new trailer for Amulet disturbed me at a molecular level.

Directed by Romola Garai and starring Carla Juri, Alec Secareanu, Imelda Staunton, and Angeliki Papoulia, the film screened at the Sundance Film Festival earlier this year, and our own Shelagh M. Rowan-Legg wrote that Amulet "explores PTSD and its lasting effects, with (mostly) great usage of horror tropes as befits the serious and devastating nature of the subject matter. Combining this with themes on the refugee crisis, the treatment of foreigners, and the crimes of men both inside and outside war, it is a powerful, if not entirely original, film, one that knows the beats of horror to be effective."

"Following an accident that leaves him homeless in London, former soldier Tomaz is brought to the rotting home of Magda, a lonely woman in desperate need of help as she looks after her dying mother. Though at first resistant, Magda eventually welcomes him into their lives and allows him to help her care for them. But as he worms his way into their routine and begins to fall for Magda, Tomaz starts to notice strange, unexplainable, and ugly phenomena. Something seems very wrong with the mysterious old woman who never leaves the top floor, and Magda may in fact be enslaved to do her otherworldly bidding."

Magnet Releasing will release Amulet in theaters and on demand July 24, 2020. Watch the trailer below.

Do you feel this content is inappropriate or infringes upon your rights? Click here to report it, or see our DMCA policy.
Alec SecareanuAngeliki PapouliaCarla JuriHorrorImelda StauntonRomola Garai