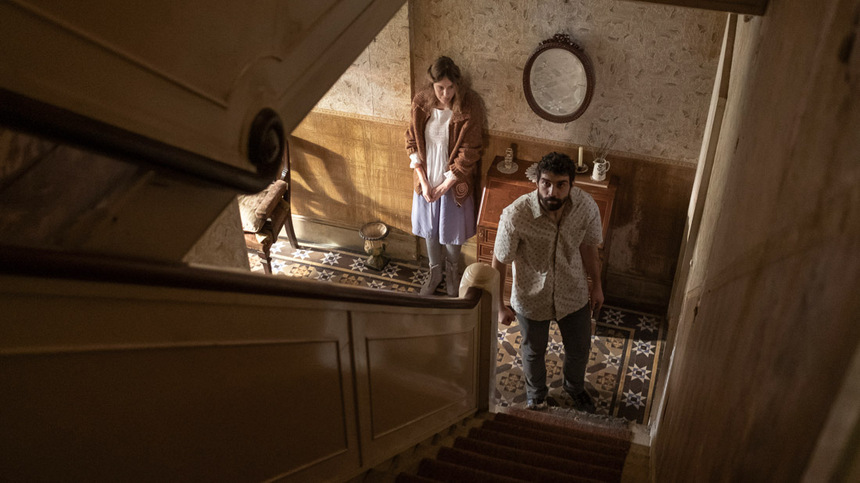 Horror and fantastic genre films are uniquely suited to stories about the trauma of war; these 'horrors' of war, be on the battlefield, on the homefront, and places in between, can often be more easily expressed or understood through horror tropes, since they are closely aligned, but not so much as to reject understanding by many viewers. This can be esepcially true of the parts of war with which we are not so familiar, the parts that are kept under wraps so to speak, the ones off the official battlefield (which provide spectacle) and ones in which the average citizen is as much, if not more, of the victim as the 'hapless' soldier.

Romola Garai's feature debut Amulet explores PTSD and its lasting effects, with (mostly) great usage of horror tropes as befits the serious and devastating nature of the subject matter. Combining this with themes on the refugee crisis, the treatment of foreigners, and the crimes of men both inside and outside war, it is a powerful, if not entirely original, film one that knows the beats of horror to be effective.

Moving between the past and the present, we follow the protagonist Thomas (Alec Secareanu); formerly a soldier from an unnamed country (though in spirit it seems to be the former Yugoslavia), he now works in London as a day labourer, saving some meagre earnings, though without any specific purpose, given that he has no attachements here. So bad is his PTSD that he ties himself up at night, which hampers his escape after a fire breaks out in the shelter where he stays. He and his belongings (minus the cash) are resuced by a kindly nun, Sister Claire (Imelda Staunton), who makes him an offer he can't refuse. There is a room he can stay in, for free, in exchange for helping keep the home under repair.

But this is, of course, not really an ordinary house. It is lived in by Magda (Carla Juri) and her invalid mother (Anah Ruddin). Mother never leaves the top floor, and Magda barely leaves the house. And that house is slowly rotting around them, with mould in the ceiling corners and hairless bats clogging the toilets. It's not hard to figure out, by us or Thomas, that more is rotten than just the woodwork, and there is much that Magda isn't divulging.

As Thomas 'settles'in this strange house, we see flashbacks of his life as a soldier, where he manned a tiny backroad alone. One day a woman, Miriam (Angeliki Papoulia) came literally running towards him, escaping her own war trauma (we can easily guess at what that was), and Thomas warns her of the dangers of trying to cross the border. As with Magda, he befriends Miriam, giving her a strange amulet he found while inexplicably digging a hole in the woods near his post; but ultimatekly betrays her in a way that is both horrofically sad and sadly predictable given the circumstances and his (albeit minimal) power over her.

Garai's script gives plenty of room not only to the actors, but to the creative team, to create an atmosphere that walks that line between familiarity and creeping terror. Cinematographer Laura Bellingham's work is outstanding; moving between the almost idyllic peacefulness of the countryside (where the horrors when they come hit like a punch), to the decrepid space of the home, which instead of porividng warmth, provides a palpable dampness that creeps like the mould in the corners. Production designer Francesca Massariol adds to this with making us constantly feel the dread, and inability of Thomas to escape this home or this fate.

What is lurking in the shadows is both supernatural and wholly natural; it is the result of those wars which are fought against women in particular, or those in which women suffer in ways too often neglected, and certainly in cinema, overshadowed. Garai draws out the mystery of Magda and her mother with a subtle yet rhythmic pulse that entraps us and Thomas before we are even aware; while the women may be deceptive, it is not without purpose or necessity given their lack of power in the real world.

While the ending ventures into a surrealism that would, at least partly, negate some of the fantastical-realism connections made throughout the film, Amulet is an impressive debut, one that might rely a bit too much on the expected beats of horror, but one which knows its exploration of trauma of both those who perpetrate violence and those who receive it.