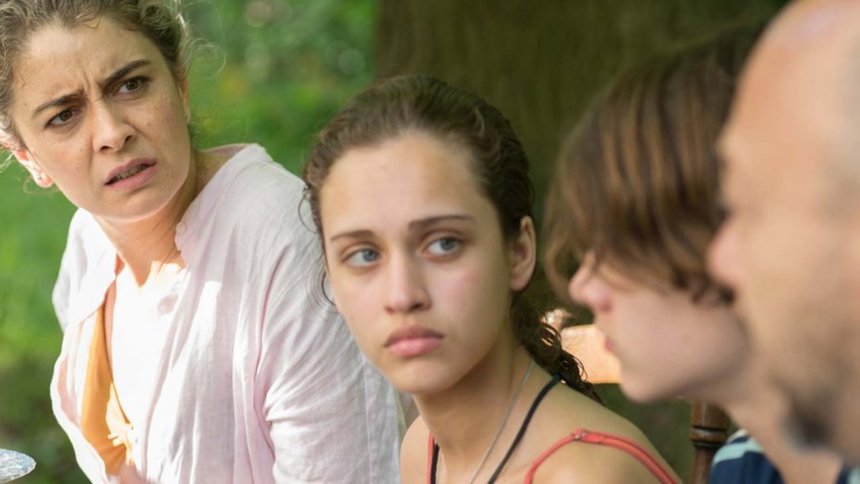 There's an old stereotype that girls are harder to raise than boys. While this may be true, I think it's not because girls are more difficult, but that our world and society makes life harder for girls. They learn far too quickly that there is much hatred in the world for them, they cannot be as free or open as boys, and are constantly imposed upon on how they look and behave. And that hardship never goes away.

Argentinian director Paula Hernández follows the story of a mother and daughter as they navigate a New Years family holiday. One is in the early stages of adoslecence; the other is entering middle age. Both are pressed upon from the outside, in particular the men in their lives. What should be a relaxing weekend becomes a pressure cooker for all the tension and buried anger that will be released in a violent explosion.

Luisa (Erica Rivas, Wild Tales), her daughter Ana (Ornella D'Elía), and husband Emilio are joining the rest of the family for a New Years holiday at Emilio's mother's house. Joining them are Emilio's brother Sergio and his two sons, and Emilio's sister Inés and her infant son. The grand country house is up for sale, and the family's publishing business possibly as well; but these discussions, held mostly by the men of the family, take a back seat to the mother's and daughter's separate realization of their place in the family, and the world, and the expectations placed upon them that quickly become unbearable.

The film opens with Luisa discovering a naked Ana, sleepwalking, with menstrual blood running down her legs. Luisa tries to reach out to her daughter, but Ana, already a typical teenager, prefers to spend more time communicating with whomever is causing her cell phone to constantly ping. Luisa is under pressure to finish a translation, even though she's decided she wants to get back to her own writing. Emilio has little interest in that, expecting Luisa to take his side on all matters, and giv ein to his demands even if she doesn't want to. Luisa tries to be accommodating - helping her mother and sister in law, being a dutiful wife and mother - but years of this subtle emotional abuse make her want to disappear.

Likewise, Ana is at that age not only where she wants more independance than her family is willing to give her, but she wants to understand her burgeoning sexual feelings. Being around her teenage cousin Alejo doesn't help; she secretly photographs him; and he starts to take advantage of this, knowing not only the power he has in the family as the eldest beloved grandson (Luisa's family are forced to change rooms for him), but as an older teenage boy over a younger teenager girl who still doesn't understand how awful men can be.

Hernández has the audience placed like a ghost in the house, overhearing conversations, having to infer from the sparse dialogue as to what is happening. This is to the story's benefit: long sequences without dialogue are deftly handled by Rivas and D'Elía, who convey torrents of their emotions in a few looks and gestures. As well, handheld camera work gives us a claustraphic atmosphere: this is an intimate family drama, but in this case, intimacy is not comforting; it is intense and uncomfortable, and brings into focus not only the obliviousness of Emilio and Sergio, but most of the clan to those who beart the burden of their willfull ignorance.

Luisa fears losing control of her daughter, but at the same time moving past her fear of expressing her own views; Ana hates her parents' control, but as she discovers too late, protection is sometimes necessary. Luisa is the in-law who might become the outlaw, never really accepted despite her conjenial nature (her face often removed from family photos); as the only girl, it is made clear to Ana, teasingly at first, and in the film's climax, in a horrible way, that she will also be considered less than the boys.

When the explosion of anger and resentment arrives, you want to jump in and fight for Luisa and Ana, against those who would entrap them and protect the guilty parties. Such is the power of Hernádez's work. It's not an unfamiliar family drama, but incredible performances from the leads, great camera work, and use of body language in place of dialogue heighton the considerable tension and make this the kind of family holiday we all hope never happens.

Do you feel this content is inappropriate or infringes upon your rights? Click here to report it, or see our DMCA policy.
Paula HernándezOrnella D'ElíaRafael FedermanDaniel HendlerValeria LoisDrama