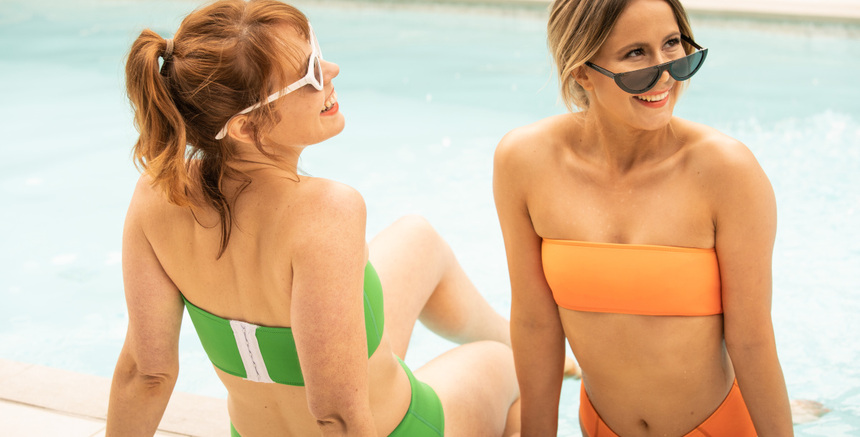 I'm amazed at all the social media apps there are to engage with friends and strangers (and I gave up trying to keep up after Instagram). And apps like Instagram, Snapchat, TikTok,YouTube,  and I'm sure more that I don't know about, have given us a weird celebrity phenomena know as the 'Influencer': someone who gains thousands (if not hundreds of thousands) of followers, giving make-up and fashion tips, physical and mental health advice. Making money either through ads or from magazines and newspapers then requesting their input, it's an odd kind of celebrity that nonetheless seems to hold great sway with younger people today.

Melanue Charbonneau's Fabulous is a modern-day riff on All About Eve, the story of one woman who is trying to get to the top, and another perched there, about to topple off. Taking a deceptively complex look at social media personalities, the invasiveness of the public and the private, and how we contribute to, and others influence (for better or worse) our public image, the film looks at the particularly harsh effect it has on women in a world already constantly judging us.

Laurie (Noémie O'Farrell) desperately wants to be a writer; but the magazine, TOP, at which she's interened isn't interested in her more serious, political article ideas. But a chance encounter with a well-known influencer, Clara, (Juliette Gosselin), might change that. Clara's image as a fashion and make-up expert needs to be enhanced, and Laurie starts ghost-writing her articles. Soon they are #BFFs; but soon, Clara catches her cheating boyfriend, Laurie starts getting more popular with Clara's followers, and their roles quickly reverse as they each question the pressure they're under to succeed.

For Laurie and her roommate and aspiring musician Elisabeth (Mounia Zahzam), the journey to the top of their field is littered with barriers, not just because they are women, but because they are certain types of women - ie those that don't get media attention, as the media still focuses on the what it sees as the superficial - and yet, the pressure is on women to look and be perfect all the time. As Clara slowly learns, she's expected not just to look perfect, but to have the perfect life. Clara's image depends on everything being amazing all the time; even if, at points, she might post a video about things being difficult, it always has to be positive, and of course, net her the followers she needs for her brand.

As her life and her work begins to crumble, Clara tries to find renewed faith in herself, embracing feminism, and showing that yes, one can be a feminist and still wear make-up. At the same time, Laurie finds herself comprimising her own ideals in order to gain a foothold as a writer; a foothold that sees her playing dangerous games with the people who care about her. They each are trying to figure out how to exist in a social media-saturated world, where likes and views replace deeper connections, and a false image is the only marketable thing.

Beneath this ultra-modern, sexy, and oh-so-positive veneer lies questions of identity, loyalty, and principles. Fabulous draws you in with two girls who forge a bond that rocks both of their lives. As they fight deparately to get what they want, they realize the world won't recognize them for who they truly are, and have to give up some things, and fund themselves and each other, to get it.