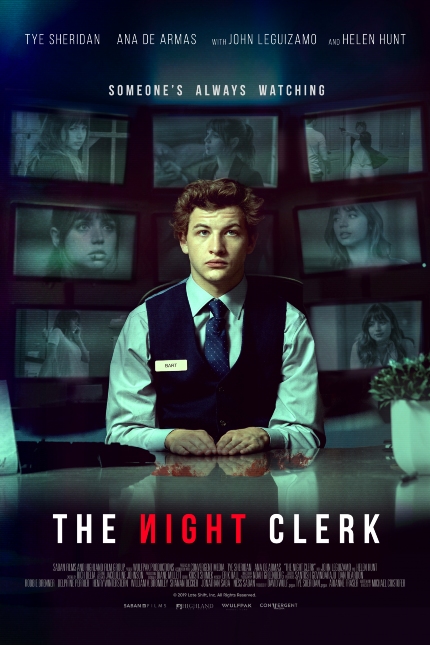 It’s difficult, if not impossible, to imagine a more tedious, tiresome, more lifeless attempt at a neo-noir thriller than writer-director Michael Cristofer’s The Night Clerk.

From a drab, painfully predictable script that would be thrown out of a first-year screenwriting class, to floundering, soporific performances, to an inert, static visual style, there’s little, if anything to recommend The Night Clerk beyond a couple of on-the-rise performers (Tye Sheridan, Ana De Armas) and slumming, paycheck-nabbing actors (Oscar winner Helen Hunt, John Leguizamo).

Sheridan’s character, Bart Bromley, a twenty-something, hotel night clerk, suffers from acute social awkwardness, one of the many symptoms or conditions typical of someone with Asperger Syndrome. Sheridan plays Bart as a broad collection of tics, gestures, and other related mannerisms, averting his eyes when interacting with anyone around him, walking stiffly or clumsily with his arms fixed to his sides, and talking in tangents whenever anyone asks him a simple question or engages in social niceties. He’s like Dustin Hoffman’s character Rain Man except he has a peculiarly dubious obsession with voyeurism, not, Cristofer repeatedly points out, because of some oddball perversion or deviancy, but because Bart uses surveillance footage taken from hidden cameras planted in selected hotel rooms to mimic human behaviors and interactions.

Bart can watch the surveillance video from practically any location, including the perpetually underlit apartment where he spends most of his non-working, waking life. When a meeting between a hotel guest, Karen Perrette (Jacque Gray), and a partially unseen man becomes violent, Bart rushes back to the hotel, but too late to save her.

A police detective, Johnny Espada (John Leguizamo), immediately suspects Bart knows more than he’s telling (he does), but converts that suspicion into a growing belief in Bart’s culpability in Karen’s death. He’s no Columbo either. Suspicion doesn’t equal evidence, however, leaving Espada on the margins, reading Google entries and books on Asperper’s and hanging around Bart’s home. Espada’s no Sherlock. He barely qualifies as a second- or third-tier detective on any one of the countless Law & Order series.

Not content to leave at least one neo-noir trope unused, Cristofer introduces The Night Clerk’s iteration of a femme fatale, Andrea Rivera (Ana de Armas), a beautiful young woman prone to wearing red lipstick (always a tell-tale sign in noirs of any vintage) who appears almost magically one night to book a solid week at Bart’s hotel. Step by step, line by line, glance by glance, Andrea ingratiates herself into Bart's good graces, showing Bart the attention he’s desperately needed and wanted -- Ethel (Hunt, under-utilized), his mother, excepted -- his entire life. But The Night Clerk’s status as a neo-noir means whatever kindness or affection Bart gets from Andrea won’t last long and Andrea may (or may not) have an ulterior agenda of her own that involves manipulating Bart to some unknown end (except anyone who’s watched a handful of noirs or neo-noirs can guess on their first try).

With a central mystery that isn’t really a mystery given its easy-to-decipher nature, autism-as-gimmick, a limited cast that necessarily also limits the list of suspects, and an incredibly lazy, servile adherence to genre tropes, The Night Clerk offers nothing new, novel, original under a midnight sun, leaving moviegoers with scant pleasures aside from bland visuals or lackluster performances, neither of which are obviously enough to elevate The Night Clerk beyond disposable fodder for late-night insomniacs or performance completists (i.e., diehard fans of Sheridan, if any, and De Armas, especially after her starring turn in Rian Johnson’s Knives Out).

The film is now avaiable to watch on various Video On Demand platforms. 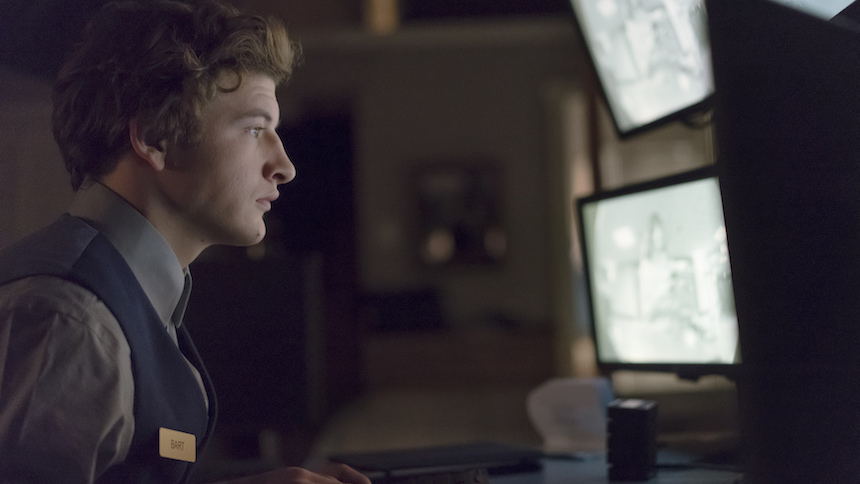 Do you feel this content is inappropriate or infringes upon your rights? Click here to report it, or see our DMCA policy.
Ana De ArmasHelen HuntJohn LeguizamoThe Night ClerkTye Sheridan