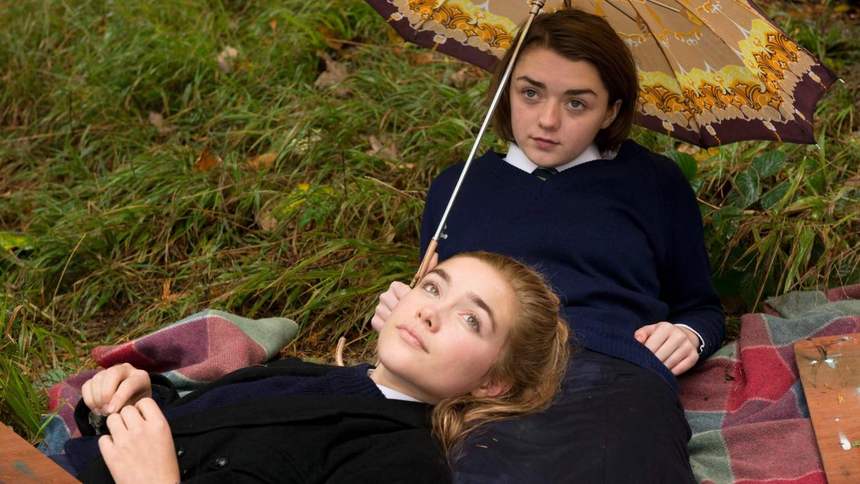 It’s 1969 at a strict English girls’ school where charismatic Abigail “Abbie” Mortimer (Florence Pugh) and intense and troubled Lydia Lamont (Maisie Williams) are best friends. After a tragedy occurs at the school, a mysterious fainting epidemic breaks out threatening the stability of all involved.

The Falling is without a doubt one of the most bizarre films I have watched in quite some time. It’s a film that has a lot to say and says it in a unique way like none that I have seen before. It’s a slow-burning film that takes its time with everything, which is something that I greatly admire, and it’s a technique that is rarely used in film these days which is a shame.

If I am going to be honest with you, the first twenty to thirty minutes of this film were extremely slow to me. Not a whole lot is happening and it came across as some sort of strange coming-of-age romantic comedy at first. The first little bit is just a lot of Florence Pugh and Maisie Williams talking about certain elements, that while, yes, progress the plot along a bit, it just felt boring to me for a while. As soon as one key element happens that transitions to the second act, from that point forward, The Falling was a movie that had my interest.

On the surface, this looks like such a beautiful and almost easy-going film, especially if you watch the film without knowing anything about it which is what I did. But with each and every single passing scene, things got so much more strange and downright otherworldly which I found to be so captivating.

But let’s talk about by far my favorite aspect of this film – the characters. Carol Morley’s script is extremely strong in its character moments in that it truly spends almost all of its time with its characters. We never feel like we are clueless as to what the characters are thinking. We know exactly what they are thinking and feeling and none of the information is spoon-fed to us, either. This screenplay was so carefully written that I have to commend it just for the characters alone. They’re given some of the best development I have seen in a long time.

Nothing absolutely crazy happens in this movie when you boil it down. So many films, especially these days, feel the need to have something exciting happening every other scene, but Morley doesn’t do that. She pauses a lot on the characters and we are always taking a quiet look at things. It was seriously so beautiful and I appreciated the fact that the story was a slow-burn rather than one that moved at a breakneck pace. Sure, there are certainly some moments that drag, but when the movie needs to be emotional, it really is.

All of the performances are pretty good, too. Maisie Williams delivers a terrifically strong performance as the lead protagonist Lydia and by the end, I really felt for her. This is one of the best child performances I have seen in quite some time. Also terrific is my all-time favorite actress Florence Pugh as Abbie Mortimer. Her character was one that shocked me, because of the direction her character takes. I truly never saw it coming and her role in The Falling took me completely off guard.

Is The Falling an astonishing film? No. I wouldn’t even call it a great film. It definitely suffers from a slow-pace with not a whole lot happening on the surface, but it is kind of a double-edged sword. The slow-pace that focuses on the characters can be appreciated, but it can also drag a lot of the scenes. Sometimes the editing is a bit choppy and a lot of the musical cues feel off. But I’d be lying if I said that this movie didn’t have a ton of emotional beats that paid off and characters that I really did end up getting attached to by the end.

Although The Falling can drag occasionally and has some technical flaws, it excels with its characters and beautifully strange and emotional story.