In 1986, hockey mask-wearing horror legend Jason Voorhees once again rose from the grave, only this time it was in Classic Movie Monster fashion 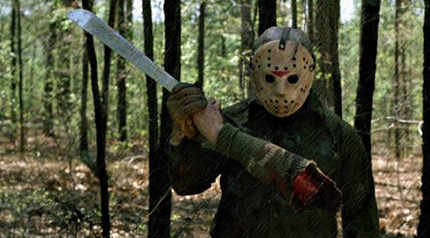 There was once a time when the screams of Friday the 13th's Jason Voorhees' many victims could be heard echoing down the cavernous halls of any 1980's Multi-plex. As a matter of fact, as the middle part of that decade passed, those same shrieks were as common place as all of that crimson blood might have been as it cascaded down the similarly long hallways of the Over Look Hotel in The Shining. However, when the late 80's arrived, many Slasher fans and Horror enthusiasts alike would've agreed that the Friday the 13th franchise was not only waning in popularity--its whole formula was just downright tired. A change was clearly needed in one form or another. Nonetheless, Slasher films love their tropes, and old habits die hard.
First, though, a few brief words on the Slasher genre as it relates to Friday the 13th.

Upon the Slasher genre's meteoric rise to prominence in the late 70's and early 80's, The Friday the 13th film series proved itself to be a valuable commodity. While it was never, and never will be strictly "respected," it never really was the type of film that had any desire for that type of thing. This was trash of the highest order from the jump, and that is meant as praise. These types of films used to play solely in front of cult audiences at "Midnight Movie" houses, but those days were over. Now, they played in the light of day next to shopping malls that had department stores. The movie going culture had shifted--for however brief a moment.
Friday the 13th's spirit and concept was never really meant to play to the masses. Be that as it may, seeing as the Slasher genre caught on and scratched a proverbial cultural "itch" at the time, things played out as such: The film series gained popularity, continued to make one uninspired film after another (annually), and eventually there was a palpable fan fatigue that you could ultimately hack at with a machete. Pop culture, as it were, would mostly leave the Slasher genre (as well as the series) behind in the 80's until Scream would come around in 1996 with all of its post-modern charms. Be that as it may, the Scream franchise and the 90's Slasher resurgence is a different story all together. Friday the 13th, though, was left with a (somewhat) valuable film series that (at least) hardcore fans would still pay good money to see upon each release. The question was, though, after five fairly rote films that all mostly followed the same beats and rules, where would the series go from this point? As it turned out, the answer was threefold.
Friday the 13th Part 6: Jason Lives is such a unique animal among the Friday... catalog for several reasons. Not the least among these reasons being that it is its own failed version of a ghoulish black comedy--but we'll get to that in a moment. Primarily, this is the first Friday the 13th film to completely embrace the Supernatural. While Jason Voorhees has always been this unstoppable killer, quite impossibly (and improbably) cheating death since Friday the 13th Part 2, this film swiftly dispenses with the pretenses. Not only was Jason categorically and definitely killed in Friday the 13th Part 4: The Final Chapter, here, he is most definitely and literally brought back to life. Which brings us to the second way in which this film is unique amongst The Friday the 13th oeuvre.

The second way in which this bat-shit little experiment remains so unique in the Friday the 13th output up until this point is, in a word, tone. Now, this covers a lot of ground. For instance, let's go back to Jason Voorhees rising from the dead. The tone of that particular scene is so important because it sets the tone for the rest of the film. It's absolutely integral, and it happens within the first five minutes of the picture. In this case it's all done in an homage to classic, Universal Monster Movies. All shadows, graveyards, tombstones and spiderwebs. As the fog rises in the spooky cemetery, there's suddenly an explosion and the lightning crashes! A jolt of electricity pulses through our rotting villain. Basically, Dr. Frankenstein's Monster has arrived in Crystal Lake. His eyes shoot open with evil intent. Jason rises up from his coffin like Dracula before him (yes, to mix references), and our Monster is now back on the hunt, ready to stalk the night yet again. Though, that's not before we get a close up shot of the monster's eye's iris; steely and determined and containing a silhouette of himself. It's walking sideways first. Then it begins turning towards the camera, all while a goofy, off-brand, James Bond theme parody plays over the soundtrack. Then Jason slashes at the camera with his machete and the blood just flows toward the screen. Which leads us to the third way in which this film stands out among all the Friday the 13th movies.

The third way in which this pretty dumb, and not terribly serious movie is unique in the Friday the 13th universe is, well, that it is dumb! And not terribly serious! From the start, director Tom Mcloughlin is clearly only interested in infusing his specific tones of Classic Monster movies, (which he successfully does in spades), and heavy and healthy doses of camp throughout. Don't get me wrong, Jason Lives certainly stalks around in the skins of a Slasher film (there's blood, gore, sex, and a high body count and all), but it has the dark heart of a twisted black comedy at its center. The unfortunate fact, though, is that it mostly fails when it tries its hand at humor. On the other hand, that's another part of what makes it all so god damned unique and endearing in the first place. For the sixth movie deep in a Slasher series, this film really is a fascinating meeting place of ideas, concepts and failures.
Look no further than Jason happening upon a group of corporate morons on retreat in Lake Forest Green, which ,of course, is the renamed (pay attention) Camp Crystal Lake from the previous films. They're playing paint ball, and things go about as well as you'd expect for the yuppies. Though, not before one of those very timely feminism in the work place jokes. However, the wormy nerd gets dismembered off-screen (for some reason). Speaking of timely, there's an American Express "Don't Leave Home With Out It" reference during another murder that I'm not even sure anyone would get anymore--which just makes me feel so damned old. Elsewhere, at the actual and functioning summer camp, you are introduced to these reoccurring nameless pre-teen characters who are constantly making these ill-timed and poorly delivered quips about their own impending mortality. It's all very awkward and ends up coming off like some fucked up, meta Greek chorus. It's wild, man. The point here is that none of these attempts at levity actually work, but can still be appealing to watch in a stupidly charming, daft kind of way.
There are several ways on which to judge if this film was a (conceptual) success for the Friday the 13th franchise. The first question is whether or not the film took the series in a fresh and new direction for a change? The answer is that, as a film, it certainly tried! While paying homage to the classic monster movies of yesteryear, and adding many doses of campy take downs into the
all too grim universe; you can't say that Jason Lives wasn't putting the best and most ridiculous version of itself forward at all times! I'd like to give a particular shout out to "Karloff's General Store" *wink wink*  as the name of the shop located in the town proper. Equally fun is the quick shot of the two books on the Occult (which are very much real) that main character Tommy Jarvis uses to hatch his plan to thwart Jason once and for all. The second question is, was it all entertaining? For better or worse, the answer to this question is, undoubtedly, yes. The third question is, of course, was it scary and gory--after all, this is supposed to be a Slasher picture? The answer to this question is, "It has its moments." In this aspect, Mcloughlin and his make-up crew go out of their way to put some of their more grotesque touches around the edges, more often than not--especially in the final act.
The title of the film is Jason Lives, and live on he did! Jason would live on to fight telekinetic teenagers. Jason would take murderous trips on great big ol' boats to (sort of) Manhattan. Jason would go to hell--well, in a way. Jason would even go to outer space! There was one common denominator throughout all of these misadventures, though: none of this shit made any money! Sure lost it though. The franchise never really had any relevancy again until the some studio ownership rights changed, and Jason was eventually teamed up with another 80's Slasher icon Freddy Kreuger in 2003 with the release of Freddy vs. Jason, which was, admittedly, a substantial box office success.
Jason Lives, nevertheless, always stands out to me. It was the first Friday the 13th film to actually try to do something different. The fact that it, more or less, failed is less interesting. Watching it stumbling around in the proverbial dark, trying to get its own shit together is its own form of rewarding. At the very least, the film stands as an intriguing failure. There is fantastic, top tier gore, a tongue-in cheek, campy element through out all of the gallows humor, and a directorial flare that works as a winking homage to the classic, black and white, Universal Monster Movies of a bygone era. Jason Lives isn't my favorite Friday the 13th picture of them all, but it's the one I love to discuss the most. For an undead franchise that would prove to lazily shift along for another couple of decades after this point, it remains one of its last moments of creativity.
Tweet Post Submit