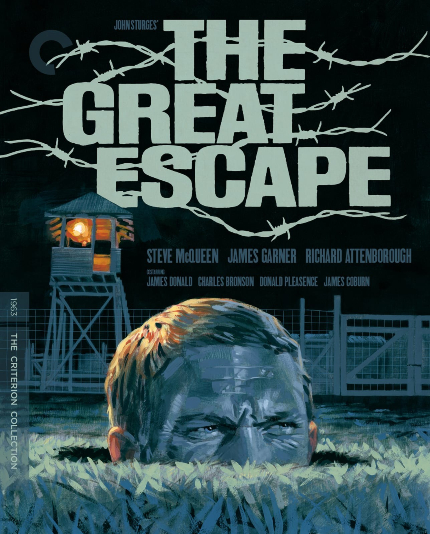 In May 2020, home video enthusiasts can anticipate a great escape from the everyday, courtesy of the Criterion Collection.

Sturdy and star-filled, John Sturges' The Great Escape imagines a prisoner-of-war camp during World War II in which heroes emerge out of tunnels and onto, most famously, motorcycles (Steve McQueen) but also planes, trains, and automobiles. McQueen gave a dashing, iconic performance alongside a sterling, very masculine cast that included Charles Bronson, James Coburn, James Garner, Donald Pleasence and Richard Attenborough. Originally released in 1963, the film will be available in a new 4K restoration, with two old(er) audio commentaries and more special features.

Masculinity is explored on a much darker level in John Cassavetes' Husbands from 1970. Teaming with Ben Gazzara and Peter Falk, Cassavetes portrays middle-aged manhood from a certain privileged position as they scrape the marrow off their bones in the searing drama. The special features include a combination of new and old extras, which should make for an intoxicating mix.

Martin Scorsese was among those filmmakers who were influenced by Cassavetes, and it should be quite fascinating to watch again some of his early work, as collected in Scorsese Shorts. New 4K restorations of five of his films will be presented, dating from 1963 to 1978. I've seen three of these in the past, and I'm looking forward to catching up with all of these in the new editions, with new discussions and more extras promised.

Less familiar to me is the work of director Dorothy Azner, whose Dance, Girl, Dance (1940) is said to bring "a subversive feminist sensibility to this juicily entertaining backstage melodrama." Azner is described as the only woman to work as a director in "the Hollywood studio system" during the 1930s and early 40s, which makes this release especially interesting.

Eric Rohmer is a name that is familiar to anyone familiar with the French New Wave. When I first became avidly interested in "Film" in the late 70s and early 80s, Rohmer's films were widely shown in repertory theaters, as I recall, filled with endless, elevated, talk, talk, talk. They felt like lightning caught in a bottle. How do they hold up? Criterion presents Six Moral Tales on three Blu-rays, available in a package which allows for a full reassessment. All have received new 2K restorations, including two that I love(d): My Night at Maud's and Claire's Knee.

Lest anyone think that Criterion is not cognizant of the present day, Paul Dano's family drama, Wildlife (2018), starring Jake Gyllenhaal and Carey Mulligan, will also be forthcoming, including a batch of new interviews and more special features.

Visit the official Criterion site for more information about the titles.

Do you feel this content is inappropriate or infringes upon your rights? Click here to report it, or see our DMCA policy.
Criterion Blu-rayDorothy AznerEric RohmerJohn CassavetesJohn SturgesMartin Scorsese