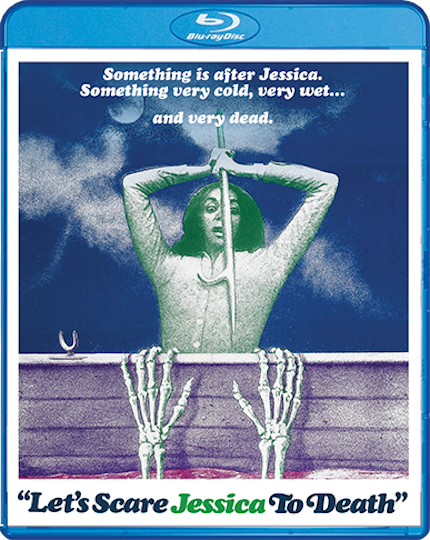 If you like nightmare fuel, you could do worse than to watch Let's Scare Jessica To Death, a very strange film from 1971. This strange film was directed by John D. Hancock, who also aptly directed a few episodes of the 1980s iteration of The Twilight Zone TV series.

This is one of those "women on the verge of a nervous breakdown" films, except that in this case, the story begins after said breakdown has already happened. Jessica, played by the lovely Zohra Lampert (Kojack, The Exorcist III: Legion), has recently returned to society after going away for a bit.

But hey, the Summer of Love was over, Roe Vs. Wade was in progress, the Vietnam War was still taking lives, and Nixon was president. That's more than enough to drive anyone insane.

So, Jessica and her husband, along with a male friend (there's a lingering aura of free love over everything), leave New York and go to a house in Connecticut. There, they discover a hippie squatter who has an untrustworthy vibe about her. This is Emily. She's nearly conked on the head by the husband with a shovel as she tries to run, but in no time, she's not deemed a threat. Until later, that is...

Both the husband, who does not in any way deserve Jessica, and this male friend fall for Emily. It's aggravating to watch, because who the hell is this squatter and why does she have siren-like powers over men? Ugh. Anyway, for some unknown reason, perhaps other than she's too trusting, Jessica invites Emily to stay on in her home. Bad move, sister. The four of them dine on rare meat in between shopping for antiques and spraying pesticide over the apple orchard. It's a strange, small commune of sorts.

Jessica begins to notice that the people in town are all cut and bandaged, and act a bit weird. Things only get weirder, of course. There's a mute girl who appears in a graveyard, and then she's gone. Later, she appears to Jessica again to point out a dead body, someone met earlier in the film. But then she runs away and the body disappears. These things happen when you have both an unreliable narrator's point of view, as well as someone who may be mentally unbalanced.

The pace of Let's Scare Jessica To Death lags here and there, as it's a product of its time. I argue that this is one of those rare cases in which it'd be interesting to see a film remade and updated, especially for modern times. A person and a marriage unraveling will always be universal themes, however.

Let's Scare Jessica To Death is a weird, atmospheric creeper that I'm still not quite sure how I feel about --- and that's usually a good thing. If you're into psychological horror that seeps under the skin and you've missed this one, you may want to check this fim out.

As for the look of the film, Scream Factory has put out into the world --- as usual --- a great-looking release. Some scenes are grainier than others, but it's barely noticable to the casual viewer. Sound is terrific, too.

Feel like adding this strange tale of eerie, lost love to your home Blu-ray library? Let's Scare Jessica To Death is out on January 28th from Scream Factory. You can pre-order the Blu-ray release over at their site here.