Review: SURFER: TEEN CONFRONTS FEAR, When Passion Meets Madness You Must Not Look Away 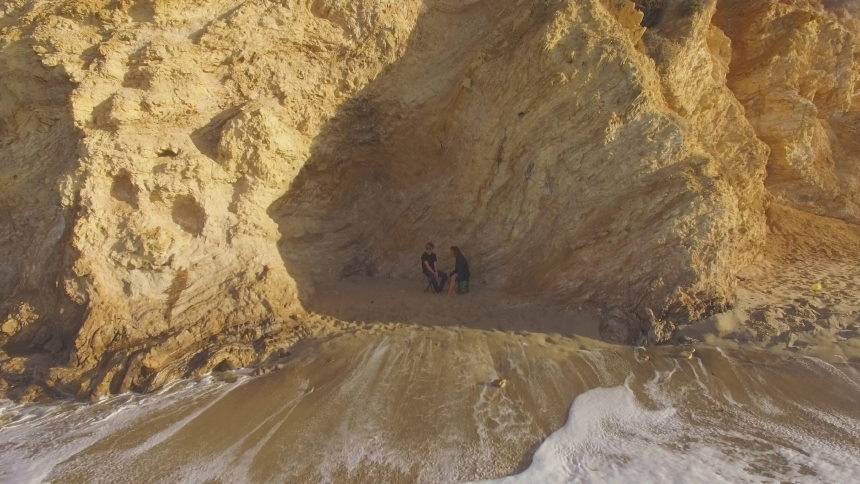 Great art often says more about the artist than it does about its subject. That may be the only thing that Surfer: Teen Confronts Fear has in common with great art. Written, directed, produced, scored by, and starring Douglas Burke, Surfer is an absolutely unique example of the kind of mesmerizing outsider art that keeps cinema alive. This is unlike anything you've ever seen, and probably unlike anything you ever will see. A terrifyingly stark look into the mind of an artist so tortured by existential crisis that the resultant venting spews arrestingly delirious madness across the silver screen.

The plot, such as it is, involves the 13-year-old Surfer (as he is credited in the film), played by Sage Burke, son of the multi-hyphenate Douglas mentioned above. By the time we meet him he is Surfer in name only, as he has recently succumbed to fear after having been dashed under a massive wave. Yet at the beach he remains, lamenting all he has lost, with nothing but his fear and a small fishing rod to keep him company. Then he spots a bedraggled man washed up on the beach, barely alive, and rescues him.

Then it gets weird.

Now, this might seem like a spoiler filled review at times, but I assure you, no description of the actions in Surfer: Teen Confronts Fear could ever come close to capturing the experience, so I don't feel too bad about doing a bit of synopsizing.

According to the man, he is the Father of Surfer (also how he is credited, played by the auteur himself, Douglas Burke), which the surfer doesn't believe because as far as he knows, his father is dead. Father explains that he's not his Dad exactly, but something like a "firm jelly", made of "squids and electricity", and he's come to help Surfer overcome his fear.

From here, Father launches into - I shit you not - a forty minute monologue jam-packed with a mix of western and eastern religious and philosophical gobbledy-gook that includes some of the most quotable dialogue of the decade. Lines like, "I'm trapped in an iron maiden of pain, boy!" fly so fast during this first act that it's almost a return to normalcy when the film suddenly turns its attention to a real life beached whale as a metaphor for... something?

At times hypnotic, repellent, and mind-numbing, the first act of Surfer: Teen Confronts Fear is barely a soupçon of the wild ride that awaits the audience. When electro-squid Father finally gets to the goddamned point and directs Surfer to meet with a man called Banks, the film goes off in a bizarre, surreal new direction that involves military doctors, a spasmodic invalid, top secret war crimes, and spilled Coke. There's really nothing that can prepare an audience for the kind of confident insanity presented in Surfer, and that's part of the magic. You never know what's going to happen next, and even when it happens, you can't believe it.

If this were simply an exercise in ludicrous plotting and indulgent philosophizing - which it most definitely is - it would be one thing, but the execution takes it from the ridiculous to the sublime. Sage Burke as Surfer looks as though he has been grounded, and rather than being forced to stay in his room, his punishment was to go with his Dad to run an insane errand. Clearly not an actor, Sage is, for most of the film, simply a mannequin to be screamed at by all and sundry, but mostly his Dad who - spoiler - shows up again in the utterly bananas second act. Douglas, on the other hand, is acting his ass off. This is his story, and the words are his own, and he'll be damned if you're going to miss his point. He spends the entire running time raging against some unseen force, passionate spittle flying from his mouth, frothing with a religious fervor that cannot be contained.

There were clearly no second takes here, the first take is the only real truth. The result is jarringly halting deliveries of almost every single line in the film. The baffling thing about this is that all of the dialogue was clearly replaced with ADR (additional dialogue recording) in post-production and *these* takes are the ones they chose to keep in the film. It's a bewildering experience from top to bottom, but one that I'll never forget.

It's rare to come across a piece of art that is so clearly a result of a passion so intense that it simply couldn't be contained. You can feel Douglas Burke's uncontrollable urges in every frame of Surfer: Teen Confronts Fear. It's as if the film is a direct look into a psyche so filled with thoughts that it didn't know how to express or organize that they all simply spilled out onto the page in an impenetrably random expression of zeal. This isn't The Room, it's not a traditional story told by a largely incompetent cast and crew; this is something more pure, more perfect in its execution, more sure of itself and its significance than anyone watching it could ever truly understand.

Objectively, Surfer: Teen Confronts Fear is terrible, but in the same way that Ivan the Terrible was terrible. It is tremendous, immense, indefatigable, and unique. You may never truly understand it - and I'd worry for you if you did - but you have no choice but to respect it.