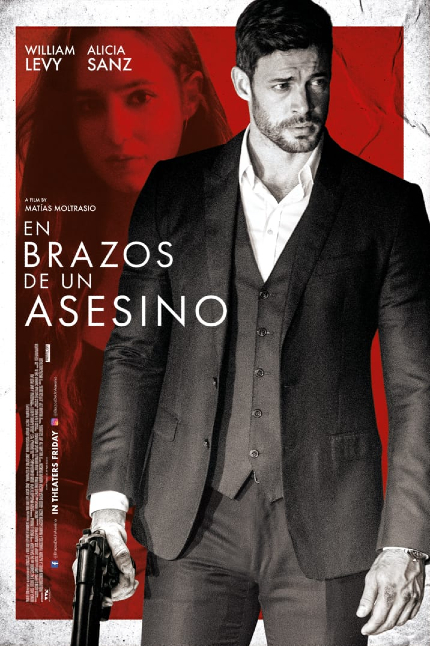 ¡Qué lástima! Blood spills early and often in an action picture that treats women as trophies rather than people.

En Brazos de un Asesino
The film will open in theaters throughout the U.S. on Friday, December 6, via Pantelion.

Based on Killing Sarai, the first in a series of suspense novels by J.A. Redmerski, the film handles what sounds like a comic-book premise with a serious intent.

The mysterious assassin (William Levy), known only as Victor when he chooses to tersely reveal it, is not only one of the most handsome men in the world -- sorry to quote from the official synopsis, but it's true -- he is also one of the most deadly killers in the world, as he demonstrates when he meets a powerful criminal tycoon and shoots a threatening henchman without looking.

The criminal tycoon, drug cartel leader Javier (Roberto Sosa), wants the criminal world-famous Victor to kill a business rival, and so all he can do is laugh at the demise of one of his henchman. Independent contractor Victor is not so sure he wants to do business with Javier, though, even for an exorbitant sum. In the bullet melee that follows, Victor leaves the scene in his large automobile, not realizing that the gun-toting Sarai (Alicia Sanz) is in the back seat until he's on the road.

As she quickly explains, Sarai is desperate to leave Javier, who stole her away from Spain when she was just 14 years of age. Since then, he has kept her as a prized possession, not allowing any of his men to abuse or molest her, as he allows every man to do as he pleases against any of the other multitude of women who he has forced into prostitution. In plainer words, Javier is the only one empowered to rape Sarai, by dint of his own villainous power.

Victor professes no interest in Sarai's plight, but allows her to escape with him while he pursues his own course of justice. He is not, evidently, an assassin for hire, but some sort of vigilante for justice, working with a mysterious group that gives him assignments with the goal of cleansing the world of high-level criminal filth.

It's all a setup, of course, so that the reluctant Victor can fall for the pliant Sarai and then draft her into service as an assassin's assistant. So, she becomes submissive to another powerful man ... wait a minute, is this a romance, not an action picture?

Yes, mostly. As played by the cool, dashing, and very good-looking William Levy, the assassin Victor is a fantasy figure, a Latin Saviour who rescues Sarai. Then he kills a bunch of people, and saves her again, they finally make love, and then he kills more people. Sarai's heart remains in peril throughout.

Directed by Matías Moltrasio, and produced by William Levy and Jeff Goldberg, the film features action sequences in which the action is nearly continuous, along with an abundance of bullets and blood. As commonly happens in too many modern action movies, clarity is lacking, so we don't often know what is happening and to whom, draining the scenes of needed tension.

Levy takes his shirt off a few times, which may well satisfy his legion of fans. Sanz takes her shirt and other garments off a few times, often for no purpose other than to satisfy the male gaze. Her character demonstrates a very limited sense of increasing agency, beyond a prostitute's fearful desire to satisfy a client, which sours the romantic scenes. Is she offering herself to the assassin because she genuinely cares for him, or because she has no other choice?

Summing up: The film depends on viewers' willingness to accept the familiar premise and the clueless actions of the characters without much thought. If you can enjoy the ride, help yourself.

Do you feel this content is inappropriate or infringes upon your rights? Click here to report it, or see our DMCA policy.
Alicia SanzDominican RepublicMatías Moltrasio.William Levy