As I watched Cats, the feature film adaptation of the wildly popular musical, I tried to imagine T.S. Eliot sitting next to me, possibly watching as I was, mouth slightly open, head slightly cocked, trying to figure out what exactly was happening before my eyes. I wondered if he, author of such lauded poems as 'The Love Song of J. Alfred Prufrock' and 'The Hollow Men', would be aghast that his most well-known work (at least with the wider public) is a series a light, fancifal poems about cats, written for children. That these poems would be put to music likely wouldn't phase him; but to see performers on the screen with digitally-rendered fur, ears, and tails, acting half like cats and half like humans, while singing his intricate and verbally difficult prose. I don't know whether he would be amazed, stupified, enraged, or entertained; or perhaps all of the above.

Given that Cats is one of the longest-running musicals in history (over 7000 performances on Broadway and over 9000 in the West End), it's almost surprising that it took this long for a film version to be made. And at least on the original paper, with a $95 million budget, it would seem that the producers wished to spare no expense, either with their casting or the necessary VFX to make the performers more feline. Unfortunately, the result is quite mixed. It is at times extremely entertaining, with some great performances, but it's also baffling, and the effects would appear to belie the price tag, in that it frequently looks just a bit too cheap.

I saw the stage musical when I was a child, and remember loving it: the amazing choreography and dancing, the variety of styles in both dancing and music to suit the personality of the cat and the mood of the moment. There is definitely a difference into how people-acting-like-cats can be viewed on stage versus on screen; on stage, it is not strange to see humans writhing in a feline-like manner, to be wearing leotards and singing directly to the audience for nearly three hours. This presentation doesn't quite work on screen; you slip into an uncanny valley, and breaking the fourth wall is very problematic. At least with the latter, the screenwriters were smart enough to change it (at least until the final scene), and as for the uncanny valley, I expect that will matter a great deal less to the target audience.

Summing up the plot is a little challenging, and remember, all these characters are cats. Victoria (Francesca Hayward) has been abandoned by her owner. She is quickly taken in by the Jellicles, a particular tribe of cat; and lucky Victoria, as this is the most important Jellicle night of the year. The clan's matriarch, Old Deutreronomy (Judi Dench), will choose the cat who will go to the Heaviside Layer to be renewed into a new life (i.e. die and be resurrected).

Through the evening, various cats present themselves as candidates for this honour, though some seem to be young enough and have interesting enough lives as to make you wonder why they would want or need to be subjected to this kind of contest. There's Jennyanydots (Rebel Wilson), lazy house cat by day, impressario with a legion of mice and cockroaches by night; Skimbleshanks (Steven McRae) who helps operate the London-Glasgow night train; and Bustopher Jones (James Corden), a very fat cat who seems to live a leisurely life of food whenever he desires.

There are some older and clearly more deserving candidates, such as Gus the Theatre Cat (Ian McKellan), and Grizabella (Jennifer Hudson), the fomer Glamour Cat who sings the musical's most renowned song 'Memory', or Macavity (Idris Elba), the rotten scoundrel who will stop at nothing, including murder, to get to the other side. All this adds up to some varied (in both tone and quality) musical numbers - most, but not all, using Eliot's poems - and the thin narrative thread of Victoria as a stand-in for the audience, and the result will likely leave you shaking your head in shock as much as confusion. 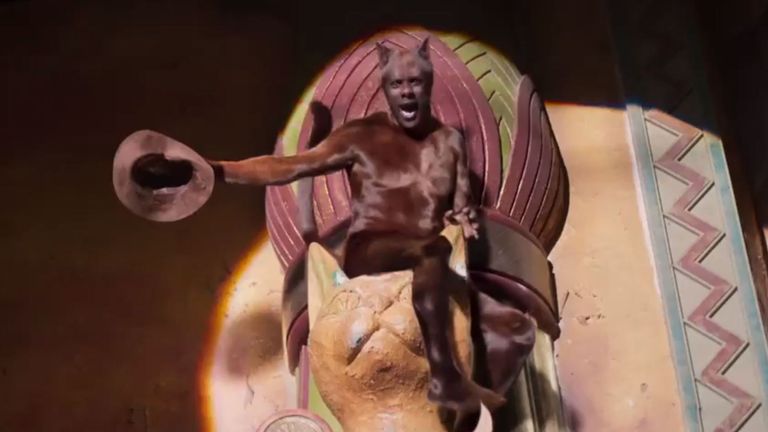 The cast give it their all (or almost), and the ensemble consists mostly of unknowns who (I'm guessing) have the stage experience to take the job seriously, such as Hayward, Robbie Fairchild as the main narrator Munkustrap, and Laurie Davidson as the magical Mr. Mistoffelees. The more 'stunt' casting is a bit of a mixed bag: Wilson is as you would expect and she's good for what the part demands, outrageous sarcasm and badly-written puns (same as Corden, though I've yet to understand his appeal in anything). Taylor Swift fans will be disappointed to wait for most of the film to see her (thankfully) brief appearance for one song. Of the big names in the film, only two are worth their salt: Dench, who will do her damndest no matter what she's in because she's a pro, and McKellen, who is a delight and seemed to be the only one truly delighted at his role, flexing his theatrical and pantomime skills to their fullest.

Apparently, director Tom Hooper and his team finished the film mere days before its gala premiere. I wish they had taken more time with it; while the VFX artists obviously worked very hard to put the fur, ears, and tails on all the performers and have each of these feline parts move in a feline/human way, something about it just doesn't look as good as it could. Or perhaps we've reached the limits of what VFX can currently do, given what Hooper was expecting of them. And certainly some of the narrative and directorial choices are odd to say the least, with scenes cutting from one to the other without any sense of cohesion (which would be difficult given the stage musical is written to speak directlly to the audience as a series of short stories as oppose to a whole).

For this is not so much an uncanney valley, as an uncanny trench surrounded by unclimbable walls that leaves you only one way out. Even as you adjust to the idea of these half-human half-cat creatures, suddenly Wilson is zipping out of her cat fur to reveal another fur covered with a shiny dress, or Ray Winstone is spouting a few lines as the heavy Growltiger, wondering what the hell he's doing in this strange place, or Elba, who is fine when he knows he's in close-up, but is utterly baffled the rest of the time and likely counting the minutes until he can escape this horrroscape.

You can either proverbially curl up in a fetal position and wait for it to be over, or you can embrace the sheer audacity and go with the flow (there were some song-and-dance numbers that I enjoyed through familiarity and great performances), or just become mesmerized and frozen in shock at the nightmarish images before your eyes. If the audience by whom I was surrounded is any indication, fans of the musical will love Cats, regardless of what I or any other critic writes.