Blu-ray Review: UNTIL THE END OF THE WORLD Marks The End Of A Movie Decade 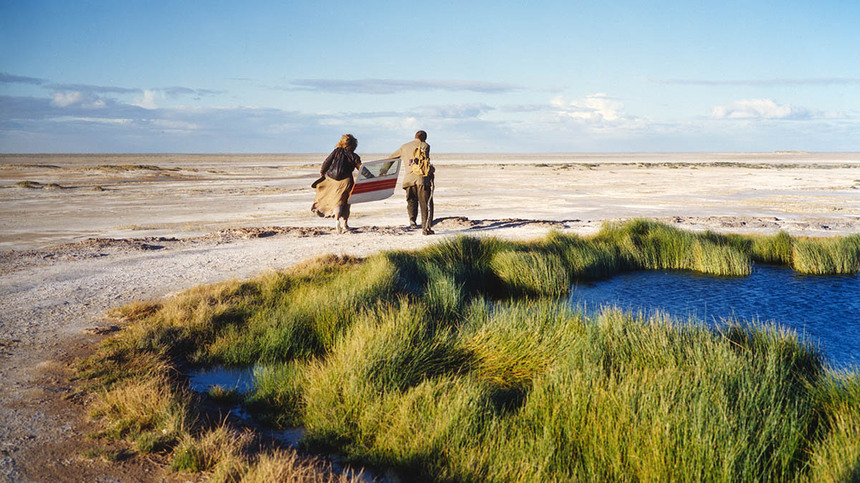 Everyone thinks they are staring down the barrel of the end of the world. Maybe right now, we have more reason to believe it than most: as the ice melts, the Orange Man tweets, and the Silicon Six reshape the meaning of truth. Closer to (our) home, the apocalypses of the 2010s have reached the shores of cinema, as the wild prophet Scorsese declaims against the coming of the Avengers and the subsequent end of the (film) world... which may have been wisdom, or may have been the all-time greatest promotional strategy for The Irishman, a film which exists in frigid negotiation between the way movies used to be (studios, directors, big stars), and the creative opportunities of at least one thing that is actively killing them: the rise of the streamers.

Speaking of The Irishman, whose ass-testing run time of three hours and thirty minutes both begged for sweet Netflix release (that pause button!), and argued at the same time for the rigours of classical moviegoing (honestly, if I hadn't seen it in a movie theatre, I doubt I would have made it all the way to the end... and if I hadn't, no element of the film would have worked, at all), mega-length cinema remains alive and well in the '10s. This is perhaps less in spite of -- and more due to -- the rise of the binge era. I've put both Miguel Gomes' thrilling Arabian Nights Trilogy and Mark Cousins' immense chronicle The Story of Film on my best-of-the-decade list, and if Mariano Llinas' La Flor didn't make that cut, well, it's not for lack of trying.

For all the arguments that attention has become more fleeting since the advent of Vine and Tiktok, I see the opposite evidence everywhere. Boyhood trained its lens on one child over twelve years; the Marvel Cinematic Universe rewarded a decade of sustained interest in the adventures of Norse gods and Russian super-spies. The Golden Age of Television might just be the Silver Age of Epic Filmmaking, repackaged (with dragons!). Deadwood: The Movie and El Camino: A Breaking Bad Movie closed the loop on the investment we gave dozens of hours' of our time to on television in what might once have passed as the classic "movie" mode of approximately 2 hours, but which, in the last ten years, feels more like a graceful epilogue on a longer, deeper story.

Fittingly, the Criterion Collection closes its 2010s with a film that is nearly five hours long. It's a fascinating valedictory for the label's work this decade in preserving and uplifting film from around the world. That decade has seen Criterion move from DVD to blu-ray to streaming; it's seen the thousandth spine come and go. Until the End of the World is spine #1007, which feels like both a lunatic excess to me (there are how many of these things now??) and proof positive that, for all of the film community's angsty naysaying, cinema is unstoppably long-lasting.

The director's cut of Wim Wenders' 1991 "ultimate road movie," Until the End of the World on blu-ray is split across two platters and clocks in at a whopping 287 minutes. I truly wonder if it's better in this format (where, full disclosure, I not only took a two-day break between hours three and four, but took a couple of decent naps at various points, too) or, more generally, what would happen if an audience committed to sitting all the way through this like I did with The Irishman. (It doesn't even have an intermission, other than the natural one at the disc break.)

The story takes place in 1999, which was ten years away when production on the film began at the end of the '80s. An Indian nuclear satellite is threatening to fall out of the sky, and there is low-level concern around the world that this will eradicate life. Against this backdrop, a woman named Claire (Solveig Dommartin) gets into a truly spectacular car crash, which leads her to a bag of stolen money and, from there, to Sam, a man (William Hurt) fleeing across the world with a treasured secret.

The first half of the film follows Claire following Sam, who is using a fantastical device to record his own vision patterns so that he can pass them along to his blind mother. (It's not far from the SQUID devices in Kathryn Bigelow's Strange Days, another fin-de-siecle science fiction film from the '90s.) There's a private detective / bounty hunter; a bank robber who really, really prefers to play drums; and a milquetoast writer (Sam Neill), Claire's ex, who follows along and tries vainly to write a novel of all of this. It's all intensely, breezily watchable.

Like all good road movies and road trips, Until the End of the World has a mixtape -- its soundtrack setting the tone across continents and countries with a seamless blend of euro-flavoured pop and Americana. Famously, Wenders reached out to twenty of his favourite musical acts and asked them to write something that they might be playing in 1999, and to his astonishment (and chagrin), only two of them declined. U2's eponymous tune from Achtung Baby features no less than four times, and REM's "Fretless," Jane Siberry's "Calling All Angels" and Nick Cave's "I'll Love You Till The End of the World" all drive the narrative at various points. The music is a significant enough piece of the overall whole that one of the two in-jacket essays in the Criterion edition covers it; Wenders also discusses the soundtrack at length in the film's video introduction (recorded in 2019) and in a second featurette specifically about the music.

On the video side of the spectrum, a full hour on the disc is given to a Japanese television program from the 1990s about how Wenders worked with a Tokyo company to create the film's bleeding-edge HD graphics to visualize Sam's vision device. There are also deleted scenes -- in case 287 minutes isn't long enough -- and a 1993 interview with Wenders about his time in Australia.

In the film's second half, the whole entourage converges on an Aboriginal commune in the Australian Outback, Y2K arrives, and the Indian satellite does, indeed, fall out of the sky -- wiping our heroes from contact with the rest of civilization. The technology Sam is shepherding to his parents expands in scale to include the recording and transmission of dreams. From there, things get weird.

In a film that has already done a frighteningly good job predicting Google Maps and even offered up a decent draft of a working search engine, Claire and Sam's adventure eventually finds them staring into the faithless depths of palm-sized video screens, lost in the bottomless narcissism being reflected back at them. There's a technological boundary line in Until the End of the World that Wenders clearly did not trust us in crossing, even though he seemed pretty sure we were going to cross it anyway. (And he was right!)

It's a dispiriting note to confront at the end of this decade, a span which has seen the echo chamber of the internet expand to deafening levels. The way Wenders pulls his characters out of it -- an ouroboros of story, music, and video art -- seems like less and less of an option in a year when Martin Scorsese had to beg audiences not to watch his latest film on their phones, in spite of having handed them the technology to do exactly that.

But perhaps that's just my end-of-decade melancholia talking. Until the End of the World sees Wenders confront the end times and muse upon what might be transmitted beyond them, but the film seems also uniquely uncomfortable with giving us the power to do any such thing at all. Implicit in the end of the world is the promise, indeed, of an ending; a release from our self-absorptions. It's something the characters of Until the End of the World are forever stumbling after, never arriving. The road goes on.

Until the End of the World