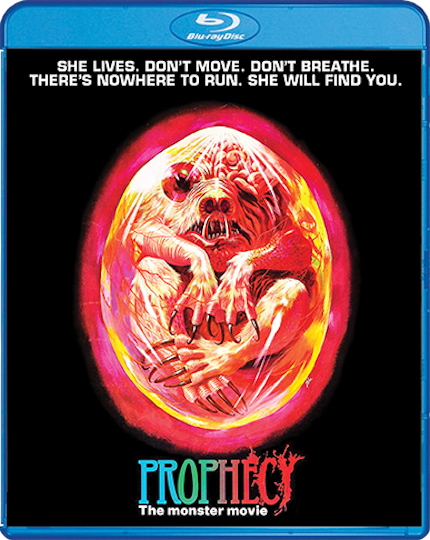 Ok, so when Scream Factory announced that they were putting out a Blu-ray of Prophecy, I have to admit that I got really excited. This 1979 killer mutant bear film is one of the more entertaining entries in the whole nature-strikes-back flicks. Or more apt, when nature runs amok after taking hits from humankind too many times and decides to even the score.

Spoiler alert: it's not good. Campers have started disappearing... and wow. Let me just say that there's one particular scene in which a child in a banana-shaped sleeping back actually exlodes into a feathery mess. The mutant bear creature attacks and bats the kid across the woods, flipping in the air in a kind of sporadic mid-flight somersault. The kid and his sleeping bag both come to an end after hitting a tree at a high velocity.

It's so hilarious, that the first time I watched this scene a few years ago, I laughed so hard that I felt I choked on my own life.

Anyway, I digress, so let's rewind. The Prophecy plot kicks into gear when a doctor and his wife travel to check out what kind of malicious impact a lumber company has on the environment. This is where thing go wrong, because of course they do!

The doctor, Rob, is played by Robert Foxworth (Damien: Omen 2), and his wife Maggie is Talia Shire of Rocky and The Godfather fame. There's also Armand Assante, who, though quite good, never quite pulls off the Native American of John Hawks role for me.

Weird casting choices aside, the acting is good-to-great all around, and the story is fun. I love a good nature-fights-back film, and here on Scream Factory's new Blu-ray release Prophecy looks and sounds quite good.

Nothing earth-shattering in terms of features here, but I always like a good special effects interview, and there are a few of those here to watch. Good times learning about the behind-the-scenes making of how the weirdo mutant bear --- and its deformed baby! --- came to be.

Prophecy is out now, people. You want to add this weirdo killer mutant bear movie to your collection. You do. I know you do. Check out a trailer, read more, and order Prophecy over at Scream Factory's site here.