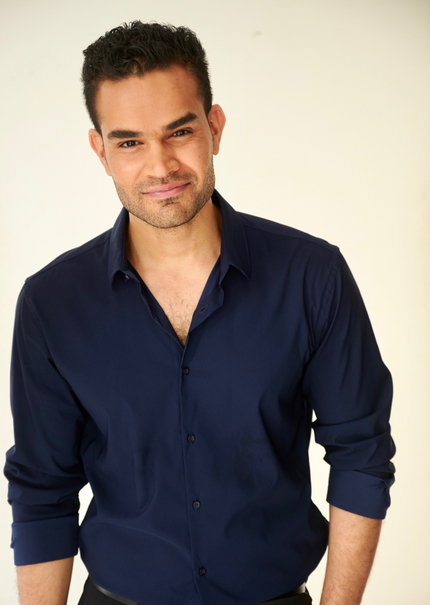 Since moving from Mumbai to New York City in 2013, Karan Choudhary has experienced a cultural shock that didn’t anticipate. It might have something to do with the fact that he had never been to the western world before, but it could also be reflective of the differences and similarities he has discovered along the way.

Karan came to the States to study acting, but a couple years ago decided to start creating his own projects. He started with the documentary short, Dedication, grabbing Best Short Documentary and Best Message awards on the festival circuit; followed by the scripted comedy, New York’d, which earned five awards and screened at 25 international festivals.

His latest film, The Timepiece, is currently gaining momentum and awards on the festival circuit. Karan wrote, directed and stars in this story about two unlikely friends from completely different worlds.

I recently interviewed Karan Chadhoury to learn more about The Timepiece, what inspired him to create it and more.

ScreenAnarchy: How would you summarize your latest short film THE TIMEPIECE?

Karan Chadhoury: The film deals with several of the real-life issues in our day to day life. No matter where you live, it feels like we’re in a culture war now days about race, religion, age, sexuality and everything else. This film tells the story of an unlikely friendship between two people from different cultures, different generations and different sexual orientations. Sunny, a young, straight guy from India, meets Larry, a middle-aged gay guy in New York, they discover their shared love of film, acting, life and each other’s company. But their friendship is tested when Larry’s prize possession goes missing and he jumps to a biased conclusion accusing Sunny of the theft. Can these newfound friends overcome their differences to forget and forgive? Only time will tell.

What do you think it’s says about prejudice in our culture right now? And, is this what motivated you to create the project?

Absolutely, the story is based on my real experiences and the prejudice I noticed throughout my journey in this country. I moved to New York six years ago from India. This city is full of a diverse group of people and so many cultures collide with one another. Where I come from, it’s totally normal to be a close friend to another guy, hold hands or put your arm around your guy friends’ neck. But in New York, it isn’t. At least in my experience. After a while, I noticed that I’m getting a lot of unwanted attention for my “normal” behavior I brought with me from my culture. That’s what inspired me to make this film and tell the story that it’s ok to be a friend to another guy. Two people from different sexuality could be seen together and grow their friendship without any prejudice involved from one another or society.

Being from India, were you shocked by the lack of cultural acceptance in the US?

I came to the United States when I was twenty-two years old and I hadn’t lived or been to any western country before. I didn't know what to expect here. I wouldn’t say I noticed “lack of cultural acceptance” but things were way different here than India. I was shocked to see the rate of divorces, how marriages and relationships worked. People would ask me questions like, “are your parents are still together”. I had never heard anything like this before and never knew that these kinds of questions could be normal. But then I realized, what’s normal in India, is completely unheard of, in America. Like “not able to see your spouse before getting married” and many other things like that. As time progressed, I just found a good balance and felt lucky to have been experiencing life in two different cultures.

Did you pull from personal experiences as source material when you wrote the script?

Yes, I did. The film is based on my personal experiences, for the most part, so there wasn’t anything in particular that I had to dig deep in. Research for this film was part of my day-to-day life living in New York City, hanging out with a diverse group of people, and noticing various things.  But my co-writer, Michael Anastasio did a fantastic job writing about the ’70s Aids epidemic crisis in New York and the true emotions of a gay character losing someone close to their heart. This was something I wouldn’t be able to do it myself because I wasn’t alive in the ’70s and never been in a situation like that. I’m extremely grateful to have a good co-writer who helped me shaped the script.

How do you handle being both director and actor during the actual shoot?

Those are two very difficult parts of the filmmaking and each job has its own challenges. As an actor my job is to know the lines, put life in it and be done with it once the shooting is over. So, I had a very good friend and someone I can trust to co-direct me while I was in front of the Camera. But as a director my job was to finish the entire project. I love to direct and I am very good at getting things done. Making a good film is about teamwork, and I always try to surround myself with the best people I can find.

It’s finished now, so you can tell us – what was your toughest moment on set?

There was a lot of tough moments while shooting this film. We had seven different locations to shoot, seven days of shooting, five actors involved, two different seasons (summer and winter), a lot of props, and a very, very low budget for the size of this film. One of the toughest moments I can remember when we had to go through a major problem when our sound guy lost one day worth of sounds from a summer season and we that find out in winters. So, we had to reshoot the summer scene in winters, cheat our way a little bit to make it look natural and bear the cost and efforts of reshooting the same scene. It all worked out at the end but I wish I didn’t have to go through that.

THE TIMEPIECE is currently on the festival circuit. How does it feel to know audiences are responding favorably to it?

Honestly, as an indie filmmaker it’s already an achievement to be able to finish a film without much resources, let alone being able to represent this film at the film festival circuit. Getting accepted at numerous festivals, getting nominations, winning and seeing the audience's reaction to this film is very fulfilling and encouraging me to keep making movies like that. It’s really hard to find an audience for short films but thanks to the film festival circuit around the globe that has created a platform for short films and indie filmmakers to find an audience and grow as a filmmaker.

In general, how do you think independent cinema is doing at the moment?

I haven’t made a feature film yet and I don’t think I’m the right person to talk on this subject. But in my opinion, I think we have way too many Indie movies that are circulating around but the filmmakers aren’t necessarily making any money off of them. In most cases they are paying from their pockets to finish the movies and hoping to find a distributor to cover their costs, but a very small percentage of those filmmakers actually find a distributor. The truth is, films are subject to the economic laws of supply and demand. I think we have more independent films supply then distributors to buy them.

What films have been the biggest impact on you as a filmmaker?

It’s not just the films that have left an impact on me, there’s number of directors, writers, actors who have equally impressed me with their work. But here are just a few films that have left an impact on me as filmmakers. Shashank Redemption, The Godfather, 12 Angry Man, Funny Girl, Fight Club, The Silence of The Lambs, One flew Over the Cuckoo's Nest, Inception, Psycho, The Sting, The Shining, American Beauty, Taxi Driver and recently I saw Ford vs Ferrari (2019), which I think is the best film I have seen this year so far.

In my experience, if you are just starting out, this can be a very risky and difficult profession. You should only to take this path if you have a passion for it, not because someone else told you to do it. Even when friends and family members try to discourage you from this business, stick to your gut and go for it. You have to be ready to face plenty of rejection and heartache. It is hard being an artist and it’s supposed to be this way otherwise everybody would do it. Use all your time and efforts to explore multiple directions in your filmmaking career and start creating projects for yourself and others. It’s more satisfying than waiting for that call or email that “might” change your life.

And lastly, do you have any future projects lined up?

As a filmmaker, I’m in the process of finish writing my next short script about dating life in New York and the challenges one could face while looking for a suitable partner in this crowded city. It’s another comedy that’s coming from my personal experiences. And, as an actor I’m constantly auditioning for major network shows and some independent films lately. It’s been a great year so far and I can't wait to start making my next film.

Do you feel this content is inappropriate or infringes upon your rights? Click here to report it, or see our DMCA policy.
cultureculture clashfilm festivalfilmmakerIndiaindie filmNew Yorkprejudice