Blu-ray Review: ALL ABOUT EVE Shines 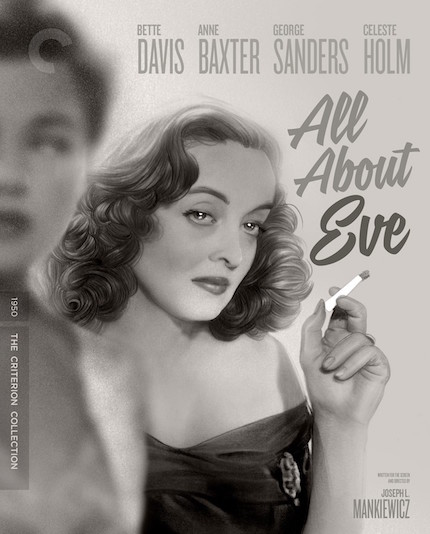 Back in 1950, famed Hollywood director Joseph L. Mankiewicz (The Ghost and Mrs. Muir, Dragonwyck, Suddenly, Last Summer) released the soon-to-be-classic tale of stardom and backstabbing, All About Eve. The film won a whopping six Academy Awards and garnered another 17 wins (also among them, Golden Globes, BAFTAs, and a DGA Award) and 18 nominations.

All About Eve stars Bette Davis (Dark Victory, Jezebel, Now, Voyager, Whatever Happened to Baby Jane?) in one of her most well-known roles in a filmography of huge films, as Margo Channing, a superstar of the stage. Anne Baxter is excellent as Eve Harrington, the sociopathic, conniving starlet who manages to steal both roles and men. Marilyn Monroe has a small role as an actress in All About Eve, as well.

Rounding out the main cast is Bill Sampson (Gary Merrill) who plays Margo's fiance, and Celeste Holm who inhabits the role of Karen Richards, Margo's best friend, snazzy dresser, and wife of Lloyd Richards (Hugh Marlowe) who writes the popular plays that Margo stars in. There's also George Sanders, who plays a sharp-tongued critic with an important role toward the end that I won't spoil.

Basically, Eve starts out as a wide-eyed ingenue, waiting at the backstage door for a glimpse of her idol after watching Margo onstage every night. Karen takes a little pity on her and brings her backstage to meet Margo, and the group takes a liking to young woman. From there, Eve gets a job as a personal assistant to Margo, but runs afoul of her after flirting a bit with Bill. She then goes on to work for a producer and turns her eyes on Lloyd.

Eventually, the claws come out and Eve constructs a way for Margo to miss a performance. Of course, Eve is the understudy and several important players (that Eve had invited on Margo's behalf) are in the audience that night. It's not long before Eve becomes a star herself, but at a huge cost.

I have to admit that I'm not describing the film half as well as it plays out; the performances are terrific and there are many barbs thrown between characters that are really enjoyable to watch.

The film looks and sounds wonderful with Criterion's signature restoration, in this case, it's a lovely 4K. I was surprised to learn that the character of Eve Harrington was based on a real-life person from the one of the included documentaries. Strangely enough, there's a recorded interview between that woman as well as the writer/actor she was messing with; they'd met for lunch via a third party and things got heated. It's interesting to say the least.

Those who love Old Hollywood films will relish adding About Eve to their home video collection if they haven't already done so. You can order the Blu-ray over at Criterion here.

Do you feel this content is inappropriate or infringes upon your rights? Click here to report it, or see our DMCA policy.
Criterion Blu-rayJoseph L. MankiewiczBette DavisAnne BaxterGeorge SandersCeleste HolmDrama