In CODE 8 Trailer, Superheroes Are Not So Super 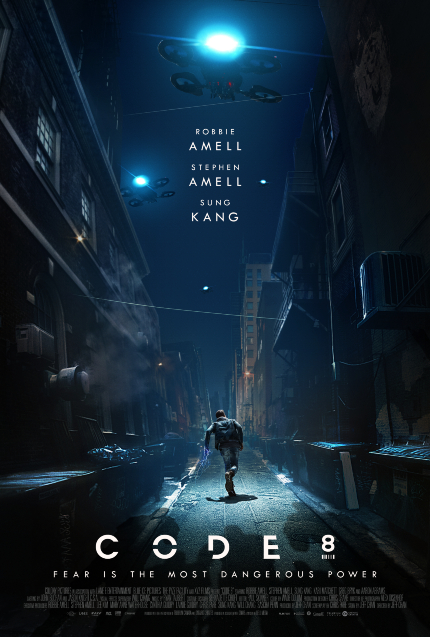 Dear fanboys, I'm afraid we are nearing a tipping point when it comes to superhero movies, that moment when everyone becomes completely exhausted by the mere mention of super-this or super-that.

Maybe, though, it's just that we need a broader range of treatments to intrigue our jaded eyes. Case in point: the new trailer for Code 8, which features familiar faces, but an idea that sounds fitting for these dark and troubled times, namely, that superheroes make up 4% of the world's population, yet are treated as any other minority class, facing blatant discrimination and living in poverty. Guess what? Sometimes, they are forced to become criminals in order to survive.

Stephen Amell (TV's Arrow) and Robbie Amell (TV's The Flash) are the requisite pretty faces, but both actors have demonstrated a gritty interior toughness in their previous roles. Robbie Armell leads as Connor Reed, "a power-enabled young man [who] is struggling to pay for his ailing mother's (Kari Matchett) health treatment," in the words of the official synopsis. The synopsis continues:

"Fighting to earn enough money as a day laborer, Connor is lured into a lucrative criminal world by Garrett (Stephen Amell) who works for Lincoln City's reigning drug lord, Marcus Sutcliffe (Greg Bryk). Garrett helps Connor sharpen his powers in order to execute a series of crimes on behalf of Sutcliffe, while a militarized police unit, led by Agent Park (Sung Kang) and Agent Davis (Aaron Abrams), hunts them down."

Jeff Chan directed; the feature is based on a short film, and I think the feature trailer sells the idea well. Code 8 will open in theaters and On Demand via Vertical Entertainment on December 13, 2019.

(Full disclosure: early in the trailer, the XYZ Films logo appears; this site's founder and editor, Todd Brown, serves as head of international acquisitions there. He was not involved in writing or editing this post.)

Watch the trailer below. Click to embiggen the fine photo of Mr. Amell and Mr. Amell.

Do you feel this content is inappropriate or infringes upon your rights? Click here to report it, or see our DMCA policy.
Aaron AbramsGreg BrykJeff ChanKari MatchettRobbie AmellStephen AmellSung Kang