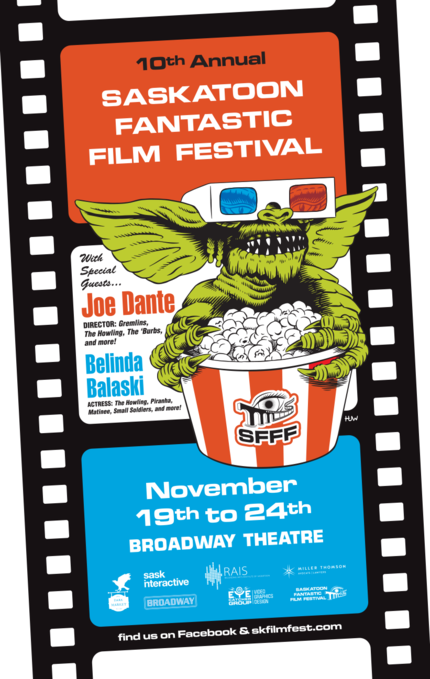 The worst summer heatwaves are a distant memory, leaves have begun to change color and night falls just a tad more quickly. It can only mean one thing: fall beckons and for Canadian fans of genre cinema, Halloween is but one of several autumnal treats on the horizon.

From November 19th through 24th, Saskatoon Fantastic is set to return to the Broadway Theatre to celebrate its tenth anniversary edition. It’s still a bit soon for a first wave of films, but Saskatoon Fantastic’s first announcement is sure to have fans watering at the mouth!

For their tenth anniversary, the festival will be honouring the careers of genre royals Joe Dante and Belinda Balaski. Together, the pair will be on hand for what will surely be a memorably trio of retrospective screenings: Gremlins, The ’Burbs and The Howling.

Read on for the full announcement and informative guest biographies.

As part of the 10th annual festival please join us on Saturday, November 23th at the Broadway Theatre for a celebration of the careers of Joe Dante and Belinda Balaski. Dante and Balaski will be introducing and then answering questions for screenings of Gremlins, The 'Burbs, and The Howling. As a special bonus the Dante directed pieces of Amazon Women on the Moon will be screened in front of The Howling.

“I really wanted us to do something special for year 10 and I can’t think of anything better. Joe Dante is a true master of his craft and had an immense impact of genre film making and being able to hear stories from him and Belinda Balaski who has starred in a dozen of his movies is a true treat to hear. ” said festival founder and Director John Allison.

The announcement of the full festival line-up will take place in Mid-October. More information is available concerning the Saskatoon Fantastic Film Festival at www.skfilmfest.com and on the Facebook page at www.facebook.com/skfilmfest/.

Joe Dante is a graduate of the Philadelphia College of Art. After a stint as a film reviewer, he began his filmmaking apprenticeship in 1974 as trailer editor for Roger Corman's New World Pictures. He made his directorial debut in 1976 with Hollywood Boulevard (co-directed with Allan Arkush), a thinly disguised spoof of New World's low budget exploitation pictures, shot in ten days for $60,000.

In 1977 Dante made his solo debut as a director with Piranha, which went on to become one of the company's biggest hits and was distributed throughout the rest of the world by United Artists. During his tenure at New World, Dante edited Ron Howard's directorial debut Grand Theft Auto and co-wrote the original story for Rock n Roll High School.

For Avco-Embassy Dante next directed the seminal werewolf thriller The Howling (1981), followed by the It’s a Good Life segment of the episodic Twilight Zone: The Movie (1983).

Having worked with Steven Spielberg on the latter, Dante was chosen to helm the first Amblin Production for Warner Bros. Gremlins (1984) became a runaway hit and grossed more than $200 million worldwide.

Dante followed up with Explorers for Paramount, a sci-fi fantasy about three kids who build their own spaceship, and then Innerspace (1987) for Guber/Peters, Amblin and Warner Bros., an action comedy in which miniaturized test pilot Dennis Quaid is injected into the body of supermarket clerk Martin Short.

Tom Hanks starred in Dante's next film for Imagine/Universal, The ‘Burbs (1989), which was followed by Gremlins 2: The New Batch for Warner Bros. in 1990. Matinee, featuring John Goodman as a huckster showman premiering his new horror film during the Cuban Missile Crisis, was a production of Dante and partner Mike Finnell's Renfield Productions for Universal in 1993.

Dreamworks/Universal's Small Soldiers was released in 1998, followed in 2003 by Warner Bros. Looney Tunes: Back in Action featuring one of Dante's favorite actors, Bugs Bunny. Along the way Dante contributed several comedy segments to the multi-part Amazon Women on the Moon (1987) spoof produced by John Landis, and directed various episodes of the tv series Amazing Stories, Twilight Zone, Police Squad!, Night Visions and Picture Windows. He also directed the network pilots for Caleb Carr's The Osiris Chronicles (1995) and the NBC series Eerie, Indiana, on which he was creative consultant throughout its run.

Dante’s Homecoming, an episode of Showtime’s Masters of Horror series, debuted in December 2005 to rave reviews from critics and audiences alike and was named to numerous “Top 10” critics’ lists. The Sitges and Brussels International Film Festivals both honored Homecoming with Special Jury Recognition Awards, and the New Yorker called it the best political film of 2005. Additional television work includes another Masters of Horror episode, The Screwfly Solution, as well as episodes of CSI: New York, Salem, Witches of East End and Hawaii 5-0.

In 2007, Dante began producing the innovative new media series Trailers from Hell, which features contemporary filmmakers providing commentaries about films that influenced them – sort of a mini-DVD commentary. More recently the site has blossomed into a popular podcast, The Movies That Made Me. In 2009, he directed the interactive new media series Splatter, starring Corey Feldman and Tony Todd, produced by Roger and Julie Corman’s New Horizons for Netflix’s nascent streaming service.

He has been honored with many retrospectives and career achievement awards by film festivals, cinematheques and museums in the US and internationally. Amongst them are the Deauville, Locarno, Cine-Excess, Melbourne, Mar del Plata, Sitges, Amiens, Midnight Sun (Finland) and Nocturna (Madrid) film festivals. In 2013, the Vienna Film Museum, Slash Film Festival and the Slovenska Kinoteka collaborated on a major retrospective of his work.

Belinda Balaski was born in Arcadia, Calif and began working at age five. The daughter of a famous jockey, Lester Balaski, Belinda's youth was spent traveling the racetrack circuit, water skiing, or in the theatre. Her mother sang with the big bands from the 30's on and met her Dad in Chicago, 1942 where she was singing in a snazzy club across from Doris Day. Dad had come to ride in two important races in 1942; the Arlington Futurity and the Washington Park Futurity both of which he won riding Occupation, and celebrated with Mom singing. They married shortly after and lit that special spark in their daughter, Belinda.

Belinda's career started in Theatre, where she has a seven page theatrical resume, before she guest starred in TV episodics, feature films, movies of the week, and commercials. Honored with an Emmy for Best After School Special, Belinda starred in The Runaways, and years later received two Emmy nominations for Are You My Mother with Michael York and Proud Men with Charlton Heston and Peter Strauss. Belinda’s theatre expertise earned her rare unanimous nods for the Los Angeles Drama Critics Circle Award, and two Robbies. Don Knotts, Nick Nolte, Charlton Heston, and Cloris Leachman are just some of the famous actors Belinda has starred alongside of throughout her impressive career. Balaski's more memorable roles include a hippie chick in the vampy made-for-TV MOW The Werewolf of Woodstock with Andy Stevens, and Lynda Carter's sweet best gal pal Essie in her first film Bobbie Joe & The Outlaw, an imperiled pregnant woman again with Marjoe Gortner in H. G. Well's The Food of the Gods, along with Robert Carradine's surfer girl in the cross country road race romp Cannonball. Belinda has starred in a dozen Joe Dante films; her best-ever Dante parts are a summer camp counselor in Piranha, a spunky go-getter News Producer in the now classic The Howling, a roasting wife in Amazon Women on the Moon, and a harried working class mother in the wonderfully raucous Gremlins I & II. Among other TV shows, Belinda has guest starred on Baywatch, Eerie, Indiana, Father Dowling Mysteries, Falcon Crest, Our House, Simon & Simon, Hunter, The A-Team, Vegas, Starsky and Hutch, Charlie's Angels, S.W.A.T., Baretta, among a slew of others. In the late 80's Belinda became a Foster Mom, and when her daughter was placed in her home, Belinda created BB's Kids Acting School where she taught kids, teenagers, and adults in theatrical, commercial and musical workshops; passing on the knowledge she has acquired throughout her four decades in the entertainment industry. Balaski also wrote and produced The T-Files, with her more advanced teens, which has had three very successful theatrical productions in Hollywood! Belinda also created and ran the Drama Dept in a private school for children with Autism/Asperger for 3 1/2 years.

With 30+ years of shooting Rock n Roll, Belinda hopes to publish one of her books soon, as she has also spent the last few years writing a novel "Shadooneh," and working on a screenplay for her favorite writer Dolores Cannon, and editing 30 years of Rock and Roll Pics she was fortunate to have been invited to by the sound engineer, Don Gooch; for whom she is now dedicating her book, "Rockin' the Causes". When Belinda is not busy with all of the above, she can be found painting her watercolors which she is most passionate about, with hopes to have a show someday soon.

Do you feel this content is inappropriate or infringes upon your rights? Click here to report it, or see our DMCA policy.
Belinda BalaskiGremlinsJoe DanteSaskatoon Fantastic 2019The BurbsThe Howling