Interview: Danny Trejo Talks 3 FROM HELL And Reveals Why Rob Zombie And Robert Rodriguez Are Such Distinctive Filmmakers

Danny Trejo might just be the ultimate badass character actor. Of course, his lead role in Robert Rodriguez’s exploitation effort Machete took Trejo to superstardom, but his filmography goes a long, long way.

During my interview with Trejo for the promotion of 3 from Hell, Rob Zombie’s third entry in the series about the murderous Firefly Family, the actor recalled, for example, that one of the top moments of his own career was the 1995 Michael Mann film Heat: “I love it, I did it with Robert De Niro, Al Pacino, Jon Voight, that was an amazing, amazing movie, I loved doing that.”

And even though he clearly enjoys the diversity of movies he gets to be part of (“I loved doing a movie called Storks... I’m in Dora and the Lost City of Gold right now”, said Trejo), he has certain directors that, more than just filmmakers, are truly his friends.

Rob Zombie is definitely among those special working partners for the actor: “With Rob, he asked me if I would do a movie called The Devil’s Rejects and I said ‘sure’ so we talked and everything, I loved it, I loved working with him. I met Sheri Moon [Zombie], she’s an absolute friend of mine, we like talking and we did that movie, it was so much fun.

"And then I was at the award presentation for somebody, he [Rob] was there and somebody mentioned that he was going to do Halloween and I was like ‘Rob! I’m in Halloween, don’t forget it!’ and he goes ‘I got you.’ So we did Halloween and we’ve been friends. And when this [3 from Hell] came up he said ‘Hey! You want something in this?’... ‘yeah, yeah, yeah.’ I feel we have a great working relationship and he’s a good friend of mine.”

In both The Devil’s Rejects and 3 from Hell, Trejo plays Rondo, who was important in the 2005 film for helping Sheriff Wydell (William Forsythe) in his personal vendetta against The Firefly Family. Rondo has less screen time in 3 from Hell, but eventually he becomes more relevant to the plot, when the protagonists Baby (Sheri Moon Zombie), Otis (Bill Moseley) and Foxy (the new Firefly member, played by Richard Brake) end up as fugitives in Durango, Mexico. 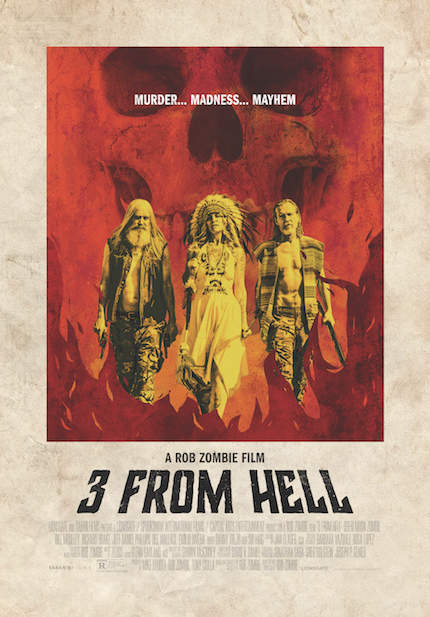 It’s no coincidence that 3 from Hell feels at times as a Robert Rodriguez Western; after all, both Rodriguez and Zombie share many of the same Spaghetti Western and exploitation influences.

Also, Trejo thinks both share another key thing that has made them distinctive filmmakers: “One of the keys is that they love what they’re doing and I think they’re audience people. There’s a lot of directors and producers that are corporate people, they’re looking at it from the business part. I think Rob and Robert, they’re are on the audience part.

"They still do good business but what they’re more worried about is the audience. I love working with people that love what they’re doing", says Trejo. "What I love about Rob and Robert is that they’re actors’ directors, they’re like ‘hey let’s try this way, how about this way, let’s do this.’ They’re more into actors than just making the movie.”

Going back for a little bit to Trejo’s most famous role, I pointed out to him that 3 from Hell has inevitably a Machete vibe. He definitely had a good laugh with this: “If Machete was there, he would kill them all! He would win! [laughs]. But [3 from Hell] is a really good movie that I really liked, I liked the character.”

Finally, will there ever be a third Machete movie set in space? “Call Robert Rodriguez! Everybody is waiting, all Mexico is waiting!”, concluded the great Danny Trejo.

Tickets for the September 16th/17th/18th nationwide release of 3 from Hell are available at FathomEvents.com/3FromHell

More about 3 from Hell