Lima 2019 Review: THE INVISIBLE LIFE OF EURÍDICE GUSMAO, A Tale Of Two Sisters 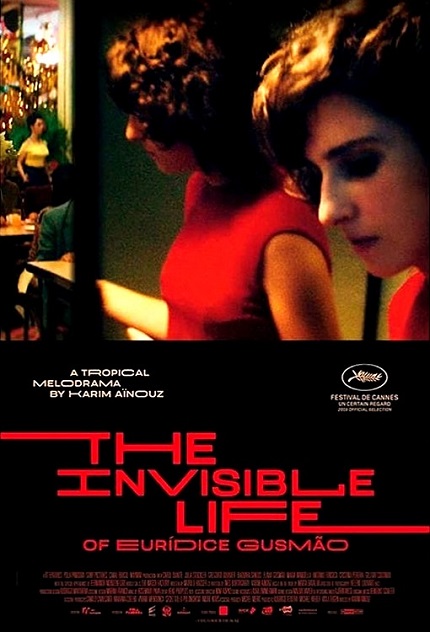 Brazilian director Karim Ainouz has long been a favorite of the Lima Film Festival; it’s an association that goes all the way back to the 2003 premiere of his first full-length feature, Madame Satã, which netted a Best Actor award for star Lázaro Ramos, and a Best Cinematography nod for Walter Carvalho.

Sixteen years later, with more films and television stints under his belt, Ainouz is once again back in the Festival and in competition with The Invisible Life of Eurídice Gusmão, a film which confirms the director as an elder statesman of contemporary Brazilian cinema.

In 1940s-50s Rio de Janeiro, the titular Eurídice (Carol Duarte) has an unbreakable bond with her sister Guida (Julia Stockler), as they both grow up with their traditionalist parents. That all changes when the younger Guida impulsively runs away with a sailor, while her sister is married off, as is the custom. Their inevitable reunion is cut short when their parents conspire to keep them apart out of shame. The two siblings will spend the following decades apart, never seeing each other and living very different lives.

At two hours and 20 minutes, Invisible Life has the scope and breadth of a novel -- in fact, it is based on one, from author Martha Batalha -- and there’s not a single second wasted in a story which is not just about the strength of family bonds, but also doubles as an indictment of old-fashioned gender stereotypes. Both Eurídice and Guida are expected to carry out traditional roles as dutiful, silent housewives – par for the course for the era – but both are too independent to conform.

Both sisters have their own dreams and goals, and the time period’s outdated views are their biggest obstacle: Eurídice has to put a promising music career on hold to play out her part as a housewife, while Guida ends up an outcast on the margins of society, a single mother with a caring, makeshift family of peers. It is their sisterly bond that keeps them going, ultimately inspiring them to challenge outdated notions of gender and come into their own.

This puts Invisible Life in the same breath as a film like Todd Haynes’ Carol, which was also about overcoming gender assumptions and challenging a patriarchal society. The fact that these outdated stereotypes about the female gender sadly still exist today in some quarters makes Ainouz’s film timeless, regardless of its setting.

It’s pure melodrama, but the director has enough experience to avoid over-the-top histrionics; this is well-told story that earns its emotional moments, aided immensely by award-worthy performances from Duarte and Stockler, as well as a late-film appearance by veteran actress Fernanda Montenegro in a small, but pivotal part.

The Invisible Life of Eurídice Gusmão is yet another film that makes a case for Brazilian cinema as one of the most interesting to currently come out of South America; Karim Ainouz continues to be at the forefront with this well-told, affecting drama with something to say.

Do you feel this content is inappropriate or infringes upon your rights? Click here to report it, or see our DMCA policy.
Carol DuarteJulia StocklerKarim AinouzLima Film Festival 2019The Invisible Life of Eurídice Gusmao

More about The Invisible Life of Eurídice Gusmao