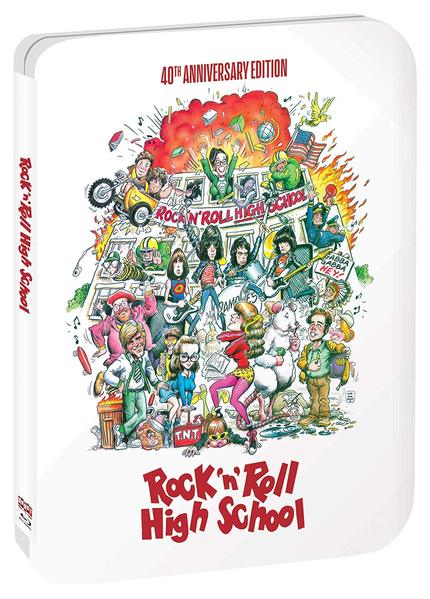 In celebration of director Allan Arkush's seminal rock 'n roll opus, Rock 'n' Roll High School, starring the greatest band there ever was - RAMONES - home entertainment heroes Shout! Factory will be releasing a brand new 40th anniversary Blu-ray steelbook edition of the film this November 19th. Initially released on Blu-ray back in in 2010, RnRHS's previous HD incarnation left quite a bit to be desired. However, this new release will be struck from Shout!'s recent 4K restoration from the original camera negatives and keep all of the original disc's bonus material while adding a brand new retrospective with much of the surviving cast and crew.

But that's not all!

Perhaps the original release's most crucial flaw was the lack of a lossless audio track, rendering its classic rock 'n roll soundtrack weaker than it should've been. That has been corrected by the addition of brand new DTS-HD Stereo & Mono lossless tracks. This alone is worth the upgrade in my book, and this has immediately shot to the top of my list of most anticipated discs of the year. Check out the rest of the details below:

With explosive musical performances from the Ramones, the outrageous candor of teenage angst and nostalgic reverie of a counterculture rock movement, Rock ’N’ Roll High School has captured the hearts of many generations.

Based on Arkush’s own high school fantasy, the 1979 cult film takes place at Vince Lombardi High School — the wildest, most rockin’ high school around! That is, until a thug of a principal, Miss Togar, comes along and tries to make the school a totalitarian state. With the help of the Ramones, the students of Vince Lombardi battle Miss Togar's iron-fisted rule and take their battle to a truly rockin’ conclusion!

Rock ’N’ Roll High School quickly developed a devoted following after its release in 1979 and became a mainstay of the midnight movie cult circuit. As with films like The Rocky Horror Picture Show, audience members began to dress up like the cast and the Ramones for screenings.

Arkush, a self-described “unabashed rock ’n’ roll fanatic,” chose the Ramones to star as the film’s musical heroes, as he felt they epitomized pure rock ’n’ roll. As Arkush remembers, “We staged a live, marathon show at the Roxy Theatre that consisted of 22 hours of nonstop Ramones,” and the tireless quartet also wrote two songs for the film: “I Want You Around” and “Rock ’N’ Roll School.” The Ramones were fans of Corman as well. Johnny Ramone said in an interview at the time, “When we found out Roger Corman was behind the picture, we said, sure, we’ll do it because we knew he had a reputation and we knew he made good movies.”