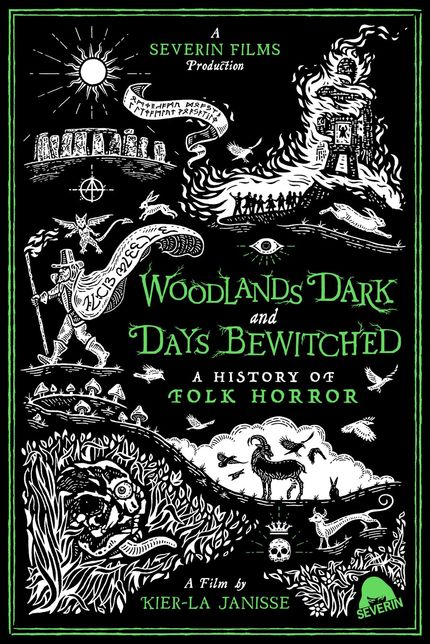 Our friends at Severin Films may be best known for their amazing cult home video releases of forgotten bizarro gems, but over the last several years they've had some sucess on the festival circuit with their original feature length documentaries as well. The first to make a big splash was Severin founder David Gregory's Lost Soul, an investigation into Richard Stanley's aborted Dr. Moreau feature. Since then they've produced a couple of others by Gregory including a Dark Shadows doc and the upcoming Fantasia premiere Blood & Flesh: The Reel Life and Ghastly Death of Al Adamson. Today Severin has announced the commencement of production on their latest doc, this time helmed by film programmer, curator, investigator, author, expert, appreciator, and all-around badass, Kier-La Janisse, Woodlands Dark and Days Bewitched: A History of Folk Horror.

With the critical success of Midsommar inspiring curiosity about the origins of folk horror on film, this is the perfect time for Janisse to bring her unique perspective on the genre to the screen. Interview subjects include cast and crew from The Wicker Man, Witchfinder General, The Witch, Blood on Satan's Claw and others. Check out the additional details below and enjoy the brand new poster illustrated by Richard Wells.

Enjoy a first look at the official poster for

Woodlands Dark and Days Bewitched: A History of Folk Horror

Acclaimed author Kier-La Janisse (House of Psychotic Women) is currently in the midst of shooting her directorial debut with Woodlands Dark and Days Bewitched: A History of Folk Horror. Currently in production from Severin Films, Janisse’s project is the first feature-length documentary on the history of folk horror, stemming from the acknowledged big three folk horror classics - Michael Reeves’ The Witchfinder General (1968), Piers Haggard’s Blood on Satan’s Claw (1971) and Robin Hardy’s The Wicker Man (1973) - through its proliferation on British television in the 1970s and it’s culturally specific manifestations in American, Asian, African and Eastern European horror, to the genre’s revival over the last decade.

This elusive subgenre has been a big part of the cinephile conversation recently with the release of Ari Aster’s mind-warping folk horror entry Midsommar. “Folk horror has exploded over the last decade with a multidisciplinary reach that few other subgenres of horror enjoy,” says Janisse, “its manifestations on film, in visual arts and music proliferating at a surprising rate. Moreover, the genre has inspired a rabid online fanbase whose favourite pastime seems to be endlessly debating exactly what folk horror is.”

About Kier-La Janisse: A film writer, programmer and producer, Owner/Artistic Director of Spectacular Optical Publications and founder of The Miskatonic Institute of Horror Studies. She has been a programmer for the Alamo Drafthouse Cinema and Fantastic Fest in Austin, Texas, co-founded Montreal microcinema Blue Sunshine, founded the CineMuerte Horror Film Festival (1999-2005) in Vancouver, was the Festival Director of Monster Fest in Melbourne, Australia and was the subject of the documentary Celluloid Horror (2005). She is the author of A Violent Professional: The Films of Luciano Rossi (FAB Press, 2007) and House of Psychotic Women: An Autobiographical Topography of Female Neurosis in Horror and Exploitation Films (FAB Press, 2012) and contributed to Destroy All Movies!! The Complete Guide to Punks on Film (Fantagraphics, 2011), Recovering 1940s Horror: Traces of a Lost Decade (Lexington, 2014) The Canadian Horror Film: Terror of the Soul (University of Toronto Press, 2015) and We Are the Martians: The Legacy of Nigel Kneale (PS Press, 2017). She co-edited and published the anthology books KID POWER! (2014), Satanic Panic: Pop-Cultural Paranoia in the 1980s (2015), Lost Girls: The Phantasmagorical Cinema of Jean Rollin (2017) and Yuletide Terror: Christmas Horror on Film and Television (2017). She was the executive producer of Sean Hogan’s short film We Always Find Ourselves in the Sea (2017) and co-produced Mike Malloy’s feature documentary Eurocrime! The Italian Cop and Gangster Films that Ruled the ‘70s (2012). She is currently co-curating (with Clint Enns) an anthology book on the films of Robert Downey, Sr., and writing A Song From the Heart Beats the Devil Every Time: Children’s Programming and the Counterculture, 1965-1985,  as well as monographs about Monte Hellman’s Cockfighter and Patricia Birch’s Grease 2. She is also in development on a narrative television series based on her book House of Psychotic Women with Rook Films (Free Fire, Duke of Burgundy, A Field in England), and a documentary series based on her book Satanic Panic. She serves on the boards for both Fantastic Fest and the American Genre Film Archive.

About Severin Films: Since their founding in 2006, Severin Films has become the foremost studio dedicated to rescuing, restoring and releasing the most provocative and sought after genre features from around the world. Their most notable titles include THE CHANGELING, SANTA SANGRE, THREADS, HARDWARE, the original INGLORIOUS BASTARDS, ZULU DAWN, COMBAT SHOCK, THE PEANUT BUTTER SOLUTION, THE DEVIL'S RAIN, THE HAIRDRESSER'S HUSBAND, DR. BUTCHER M.D., THE KILLING OF AMERICA, THE BOYS NEXT DOOR, BURIAL GROUND, THE SINFUL DWARF, THE MAD DOCTOR OF BLOOD ISLAND and a number of films from Eurocult icons Jess Franco, LucioFulci, Joe D'Amato, Bruno Mattei and Claudio Fragasso. With offices in Los Angeles and London, the company’s international successes on Special Edition Blu-Ray and niche theatrical has garnered acclaim in The Hollywood Reporter, The New York Times and The Onion AV Club, and led BlogCritics.org to proclaim, “Severin Films are well on their way to becoming the greatest indie label of all time.”