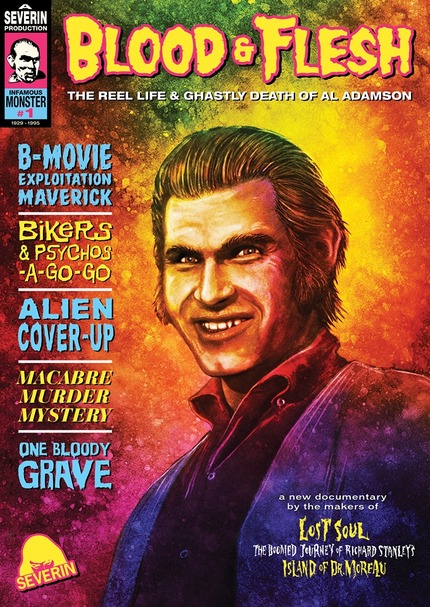 Al Adamson wasn't what you'd call a superstar filmmaker. Toiling in the world of super low budget B- and C-grade drive-in fare from the early '60s through the early '80s, Adamson was responsible for inflicting more than thirty films upon an largely unsuspecting public during his career, often recycling the same film with different titles to try to squeeze a few extra bucks out of it. Being an unknown didn't stop him from being passionate, though, and if there was anything Adamson loved, it was making movies. Then, one day, he just disappeared off the face of the earth, only to be found much later hastily buried under cement and a lovely new tile floor in his own home.

What happened to Al Adamson? This is one of many things director David Gregory tries to uncover over the course of one-hundred minutes in his new documentary, Blood & Flesh: The Reel Life and Ghastly Death of Al Adamson. This new feature documentary, Gregory's third such effort since debut with Lost Soul: The Doomed Journey of Richard Stanley's Island of Dr. Moreau, tracks Adamson's life and career from his earliest days all the way through to his shocking death and the conspiracies surrounding it.

Gregory interviews over a dozen subjects with close ties to Adamson's life and work, basically, if you worked with him and are still alive and kicking, Gregory's team tracked you down and had a chat. In addition to these new and insightful interviews with family, friends, collaborators, and loved ones - many of the subjects fit multiple descriptors in this case - we also hear substantial portions of the story from the late Adamson himself, though the magic of archival interview footage.

Those who know Adamson's work at all are likely going to be most familiar with his bargain basement schlocky horror. Films with titles like Blood of Ghastly Horror, Satan's Sadists, Blood of Dracula's Castle, Dracula Vs. Frankenstein and the like were his bread and butter. However, Adamson also managed to cash in on the western craze, several different exploitation booms, and even a children's film with his wacky talking chimp movie, Carnival Magic. Truth is, Adamson was kind of a savant when it came to making and selling his idiosyncratic work, and Gregory gives a great glimpse into his cinematic oeuvre in Blood & Flesh that will likely have cult film fans scribbling down as many titles as the can for later exploration.

The first two thirds of Blood & Flesh is dedicated to Adamson's work behind the camera. Interviews are plentiful, including several segments with Russ Tamblyn (Twin Peaks) and others. However, it's the final stretch of the film that is truly incredible. Gregory explores the mysterious nature of Adamson's disappearance and death with those who were closest to him at that time. These interviews include not only his brother Kent Adamson and close collaborators, but also the local law enforcement on the case and even Adamson's housekeeper, who turns out to be a kind of star witness.

Conspiracies abound in the weeks and months leading up to Adamson's untimely demise, with a particularly ominous theory involving aliens from out space even making an appearance. In the end, it seems, it was much simpler than all that as Blood & Flesh seems to lay to rest any lingering doubts about the case with a thorough investigation of the case and its outcomes.

The thing about a great documentary is that the viewer shouldn't need to be invested in the topic ahead of time to be engaged with it by the end of the film. If the storytelling is good, the doc will draw you in, whether the subject was something you care about or not. Gregory's Blood & Flesh is one of those documentaries manages to engage the audience by giving an little known but extraordinary story its due. It's a fascinating and often even fun tale of a guy doing the best he could with meager resources, and the magic that came of it. I didn't know a lot about Adamson, having only seen maybe one or two of his films over the years, but I'm definitely encouraged to go back and dig around in his filmography to see what gems lay hidden.