With a career stretching back to the 1960s and screen credits including American Graffiti, Jaws and Close Encounters of the Third Kind, actor Richard Dreyfuss needs little introduction. In his latest role, the actor play an elderly widower, Angus, in moving comedy-drama Astronaut. With a long-held dream of space flight suddenly reignited by an independant space agency's open competition for everyday astronauts, Angus must battle prejudice against his age and health to realise his dream. The debut feature of writer director Shelagh McLeod, the film finds Dreyfuss turning in a sensitive performance as a man pushed to the margins by societal views of the elderly and even his own family's attitudes towards the percieved disruption he may cause thier lives.

Bringing the film to Edinburgh International Film Festival, the legendary actor was in a meditative mood as he briefly discussed the role and refelcted on a career in acting.

Richard Dreyfuss: I loved the idea that someone was going to make a movie about what this movie is about, and they don't do that enough. You know film has the ability to take you on a magic carpet ride, but they usually settle for a lot less. When I read the script I thought Sheila has been living in my attic as she hit a bulls eye in terms of what’s important to me and what I think films should have. I’m proud of this work and I think that if you can spend your life doing something you are passionately in love with and get paid for it and you get, in essence, a tip of the hat, I don't think there’s a better way of spending your life. One day not long ago, not long after the film was over, I realized I’ve been doing something I love for 60 years and boy that made me happy.

Did you have any reservation about playing a character at this final stage of life?

When I was offered this role I had already retired as an actor but I knew this film fit to a T my ethics, my life, my way of thinking and my ideas and I had no problem saying yes. In fact I never entertained saying no. When you have so much fun, it’s so rare to find a story and a character that just suits you to a T. And I was old… and there it was. When I turned 50 I turned to all my friends and said “you've entered the third act,” and I knew that I wasn’t kidding.

You mentioned the film made you reflect on a 60-year career. Looking back, what do you consider some of the highlights of those 60 years?

Well, two weeks after I said I’ve entered the third act, two of my best friends dropped dead. So I didn't really need a greater push than that to look back. And you realise that when you’re closer to death than you are to high school you entertain ideas that you never ever would have entertained at any previous point.

I know that film works as a collective art form because it should, and it does, and wow is there a power to that pursuit. That was a great discovery, that you can never really predict what you are about to experience when you go into a film. It’s always brand new. I would give to a film a breadth and an allowance and I would try anything I had to do to make the audience and the actor surrender and submit, in the case of this film, to a fabulous idea. I once watched John Gielgud in person when I was 16 and he really did surrender to great prose and I was absolutely beyond my ability to articulate it, and I went up to him at the end of the show and said thank you. And that’s all I said because I would have wasted my time and his trying to articulate what I thought.

Is Angus’ dream of going to space something you share?

I can’t imagine people not having that dream. When I was a little boy I had that dream, just so I could turn around and see Earth floating beneath me. And then I realised if you were going to look for, and find anything, that is a metaphor for the heavens and the depths of the stars, you needn’t go any further than man’s mind. You have to make friends with your own mind and if you don't you’re in for a life of misery. 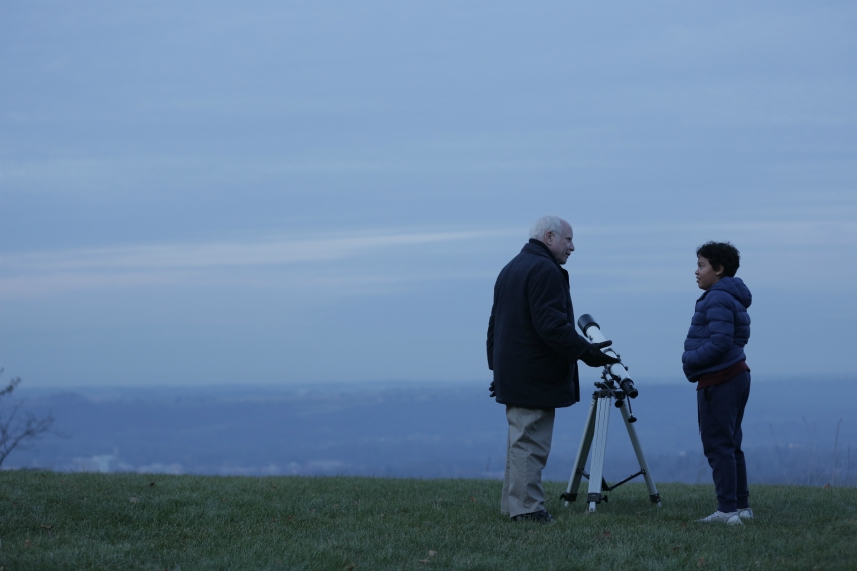 Do you feel this content is inappropriate or infringes upon your rights? Click here to report it, or see our DMCA policy.
astronautEdinburgh international film festivalrichard dreyfuss