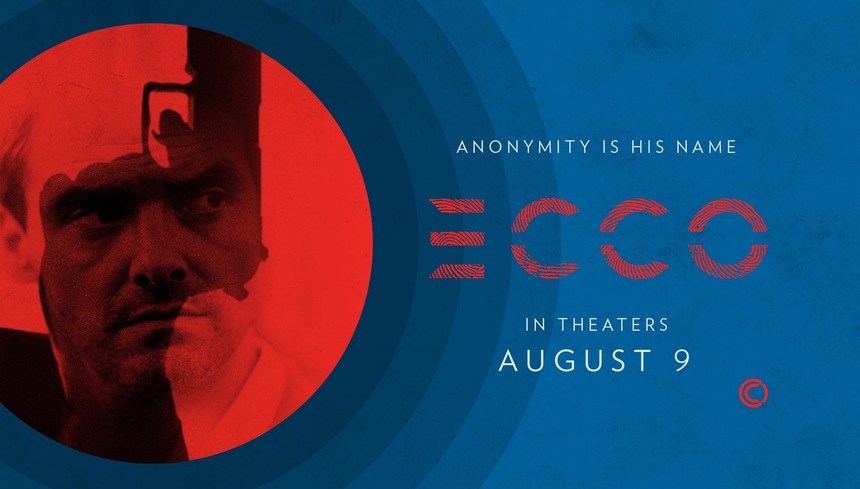 The new thriller ECCO is poised to make a big splash when it opens in over 40 cities nationwide on Friday, August 9th. I had a chance to chat with up-and-coming director Ben Medina about his vision for the project, and why he wants audiences to plan on multiple viewings.

Where did the idea for ECCO come from?

The story of ECCO was born from many conversation with my friend and lead actor Lathrop Walker. While living together in Los Angeles we developed multiple story and script treatments, one of which became ECCO. The ideas around the main character, Michael, blossomed from hours of development around creating a grounded narrative about a man, living in the shadows of his former life as a high-level, elite covert operative for a clandestine organization, and the consequences of leaving their employ for a quiet and nomadic life. The concept evolved from a man leaving at the height of his career, into a story of a man, already absent from this life and his reflection on the choices that allowed him to be a ghost; and most importantly, the larger question: would they let him live in the shadows, with all his knowledge, all his training, and all the identities of those that created him? Does he know everything about his past? The answers sparked the story and the treatment. And the discovery of what would happen next… He would be hunted. He would be found. He would need to survive their pursuit and destroy those behind his creation.

What is one thing you want people to take away after seeing this film?

In a perfect world, audience members would see the film more than once. There are layers built into every scene, both visually and in the meaning of every word in the dialogue. The narrative has been woven tightly, so there is a high-level of attention demanded of anyone experiencing the film; ideally, walking in the audience will accept that invitation with depth and passion. There are dynamic decisions in every frame and in the design of every moment of sound, working to bring the audience closer to Michael and to understanding his choices, to answering the questions about his truth.

I would say to audiences: give the film the time it deserves. Listen deeply. Watch closely.

Tell me about how you met star Lathrop Walker.

Lathrop Walker and I met while attending the University of Washington School of Drama. We became friends based on our passion for in-depth character development, shared an unquenchable hunger for perfection and both had great senses of humor about not wanting to talk about ‘process’.

While at UW, we worked with some of the best acting professors in the United States, including: Robyn Hunt, Steve Pierson, Jon Jury, Shanga Parker, Cathy Madden, Valerie Curtis-Newton, among many others.

After college, we worked together closely in a director and actor capacity; casting Lathrop in multiple projects, including: music videos, short films, commercials and studio screens tests.

Although, he moved to New York City to pursue theater and film, our paths soon crossed when we both lived together in Los Angeles. Where we lived together and worked on story and script treatments, every day for 2 years.

It was never a question about if he was going to be the lead in my films, but when would these projects get off of the ground. We have always found ourselves ready to commit to the most daunting of endeavors based on our bulletproof mutual trust, creative partnership and 16 years of friendship.

Our faith in our respective crafts is our unbreakable bond; that has now become our brotherhood between an actor and director.

I'm interested in how you achieved the visual look of the film. Who helped you bring this vision to the screen?

We did a majority of our visual effects in-camera, and built shots around achieving composition, speed and execution around doing it all in-camera. A handful of shots turned into a longer list of visual effects shots once the film was completed and specific sequences needed minor augmentation from two visual effects house -- one in New York handling all 3D motions graphics, sky-replacements and digital mattes and one in Seattle handling violence and blood effects, cosmetics and re-lighting and minor enhancements.

All ‘illusions’ were handled in-camera, which although not cutting-edge, is more traditional filmmaking in the styles of Stanley Kubrick, Steven Spielberg and more recently, Christopher Nolan. Many of these illusions will not be seen upon the first or second viewing of the film.

We have the opportunity to finish the picture at the amazing facilities at EFILM in Hollywood. We worked with Head of Production Chris Taft, Producer Jose Williams, Senior Colorist Mitch Paulson and Assistant Colorist Andre Rivas. Over a period of 4 weeks, we worked every frame of the film to bring my completed vision to life. Fortunately, this is a world-class team, who welcomed a first-time director with open arms; and open minds to an extremely precise vision. We benefited greatly from Mitch Paulson’s expertise and extraordinary profile of work including: Blade Runner 2049, Sicario, Prisoners, Skyfall, among others.

Do you feel this content is inappropriate or infringes upon your rights? Click here to report it, or see our DMCA policy.
ben medinaeccolathrop walkernew releasetabitha bastientheatrical opening