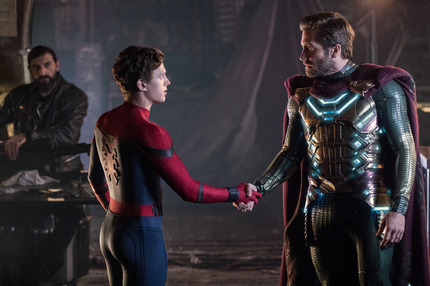 Heads up: This review contains spoilers for Avengers: Endgame.

The first post-Endgame Marvel film attempts to lighten the somber mood created by that film's very heavy character work by sending Tom Holland's Spider-Man on an international school trip designed to elicit memories of the great teen road trip movies of the last thirty years. Spider-Man: Far From Home sees Spidey wall crawling and web slinging in Venice and other European tourist traps on a journey to recuperate from yet another potentially apocalyptic event thwarted by his teammates, the Avengers, and the rest of the Marvel universe. Unfortunately, there's no rest for the weary, and before too long, his rest & relaxation turns into doom & destruction when primordial elemental beasts attempt to pound these beautiful European locales into dust.

But let's take a step back before we get too deep into all of that.

It's the end of the school year, and Peter Parker (Holland), and his classmates - best bud Ned (Jacob Batalon), big time crush MJ (Zendaya), eternal pest Flash (Tony Revolori), and others - are on their way to Europe with their science club to explore some of the treasures of the continent. Peter has planned to finally tell MJ how he feels via a long and elaborate sequence of events and gestures to end at the Eiffel Tower, but hate has other ideas.

When an unknown beasty made up of very angry water shows up in Venice and proceeds to trash the place via the cities convenient series of ancient canals, this villain is met by a mysterious flying super hero who ultimately - with a bit of help from Spidey - saves the day. Not too far behind is Nick Fury (Samuel L. Jackson), who explains introduces the stranger as Quentin Beck (Jake Gyllenhaal), an inter-dimensional traveler from an alternate Earth who has arrived to save this version of the planet from these Elementals that destroyed his own home. Peter seems impressed, though bummed that he can't even manage to go on vacation, and agrees to help Fury, Beck (soon renamed Mysterio after a TV news report), and S.H.I.E.L.D. to put these existential threats down for good.

Unfortunately for Peter, not all is as it seems, and his own mettle is tested as people he trusted soon turn out to be not at all what he thought. With all of the Avengers on hiatus elsewhere (isn't that always the way?) and his mentor, Tony Stark gone for good after the events of Endgame, it's up to him and his friends to solve this problem and keep the peace. It's going to be a tough job, and it's totally ruining his plans to get with MJ, but a man's gotta do what a man's gotta do.

Written (Chris McKenna & Erik Sommers) and directed (Jon Watts) by the same team who helped reboot the Spider-Man franchise with Homecoming a couple of years ago, Far From Home visits the same Spider-Man universe as that film with a decent degree of success. One thing that this newest iteration of the character gets right is the fact that Spider-Man is just a kid, dealing with kid things. which makes all of these larger than life intergalactic battles he keeps facing seem insurmountable, even though he has previously surmounted them pretty well.

In Far From Home, it's revealed that Tony Stark intended Peter to be his heir to the Avengers legacy by leaving him the keys to the proverbial castle with access to all of the Stark tech. While really cool in theory, in practice, Parker is having trouble coping with the level of responsibility that brings, especially when combined with his schoolwork, relationships, and an overwhelming sense of grief that becomes very real when the gauntlet (so to speak) is handed from the man he admired over to him.

Parker has had almost no time to process the feelings that have been triggered by the death that has shattered his world. He always felt as though he was somebody because Stark said he was somebody, with that concrete validation gone, and his worth now in his own hands, he's a bit adrift, and he's having trouble coming to terms. It's the same kind of insecurity that any teenager faces, except for Peter, his insecurities could cost the entire world their lives. And he still hasn't told MJ that he *like* likes her.

This is where Beck/Mysterio comes in. As a surrogate father figure, Gyllenhaal's Beck provides Peter with the guidance and reassurance he thinks he needs to do the heroic things that need to be done. But it's all an illusion, and in the end it's going to be up to Peter and those in whom he puts his true faith to make the world safe again, at least for now.

Kind of a cross between a kinder, gentler Eurotrip and the sort of localized super-villainy of the first Avengers film, Far From Home is a fun time at the movies that is certainly more of a light-hearted popcorn film than any of the more recent films. Thanks largely to the fact that there's no longer much need to provide context for a big blowout, Far From Home can explore these more intimate emotional themes in the context of a big adventure story without having to share the spotlight with a dozen other parallel stories. It's kind of nice to go into one of these films, the 23rd or so in a series, without needing to do too much homework and come out perfectly satisfied that you only missed out on a handful of relatively insignificant jokes.

As much as I love Sam Raimi and Toby Maguire's interpretation of the Spider-Man story, it's hard to deny that Tom Holland is the most faithful iteration of the character to date. Peter Parker as an insecure kid genius is the Peter Parker we always needed, and Tom Holland's performance is spot on all the way through. It is his interactions with a completely game cast of friends, Zendaya's MJ in particular, that really turns this into the current champ of Spider-Man adaptations. There are no grand romantic gestures, at least none that are successful, because who managed to do anything exactly right at fifteen years old? Everyone is awkward and unsure of themselves, and they manage to stumble their way towards being okay, and once in a while, even into greatness. It's a wonderful depiction of what life a as a teen is really like, something that's been missing from the previous films.

That being said, there are a few gags here and there that will fly over the heads of those who haven't been along for the ride the whole time, but it's not a deal-breaker in that regard. Spider-Man: Far From Home is a thrilling teen-angst filled travelogue of tremendously tectonic trouble that never forgets what it is like to be a kid, even one who has saved the world several times.