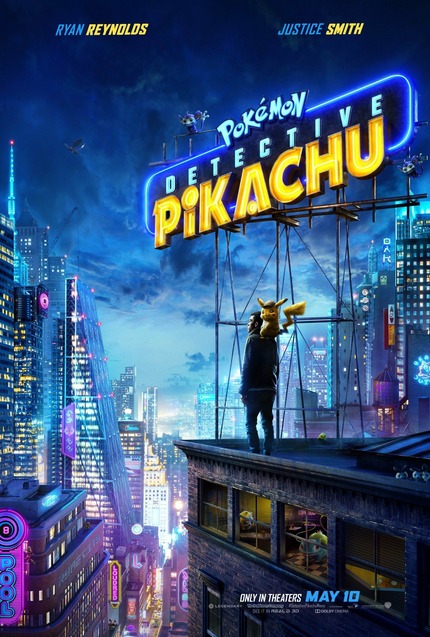 I'm getting (slightly) too old for this shit.

I graduated from high school in 1997, a few years before Poké-Mania swept North America and ultimately became one of Japan's most popular cultural exports. Pokémon, the brainchild of Tajiri Satoshi, in 2019 encompasses a massively popular universe of video games, card games, animated serials, and animated features that have become ubiquitous over the last decade, most recently bursting back into the popular consciousness with the AR (augmented reality) video game, Pokémon Go.

While the animated features have been present on cinema screens in specialized one-night-only screening events for years in the US, Pokémon Detective Pikachu marks the property's first attempt at a big budget live action feature, and while fans will likely cream their jeans over the result, the rest of us are definitely going to leave the cinema with far more questions than answers. Detective Pikachu is wish-fulfilling fan service of the highest order, so much so that the writing and execution are subjugated to cutesy antics and in-jokes to a staggering degree, leaving the film a confusing mess.

I'm not really sure that a plot synopsis is even necessary for fans, but for the rest of us I'll try.

Tim Goodman (Justice Smith) is a suburban insurance adjuster who is perfectly content living a milquetoast life out in the sticks when he is called to Ryme City, a utopian metropolis, following the death of his police inspector father. Once he gets there to collect his father's things, he finds evidence that maybe his death wasn't a coincidence. He stumbles across his father's old partner and the two go on a hunt for the truth, along the way uncovering a Chinatown-esque conspiracy that could potentially destroy Ryme City.

Not a bad little plot for a modern film noir detective story, but the twist is that Tim's new buddy is an anthropomorphic little cutie named Pikachu (voiced by Ryan Reynolds). Pikachu is a Pokémon, a kind of separate race of creatures with special powers. In Ryme City, these creatures often bond with humans to form symbiotic teams, but normally they don't communicate with words, which makes it all the more strange to Tim that he can understand his buddy perfectly clearly, an oddity that throws both him and the Pikachu into a confusing spiral.

The pair spend the next few days "detecting" all over Ryme City, looking for clues into who killed Tim's Dad and why, and every few steps they come across another crazy Pokémon. For fans, I'm sure there's a massive joy of seeing their old favorites given some big screen face time, however, I found myself mostly wondering, "who is that? why did he do that? why is everyone laughing?".

The thing about Pokémon is that there are literally hundreds of them, hence the franchise's catch phrase "Catch 'em all!", encouraging kids to buy up as much merch as possible. In a stroke of genius, the producers of Detective Pikachu have turned their film into a feature length festival of cute weirdness meant to inspire consumption of goods on a massive scale. The damaging effect this has on the film's cohesion for a filmgoer with no prior knowledge of the work is staggering.

For example, at one point in their travels through Ryme City, Tim and Pikachu (does he have a name that distinguishes him from other similar creatures, or are all Pikachu called by the same name? I have questions) stumble upon an underground illicit fight arena in which Pokémon battle each other for sport. When Pikachu gets roped into fighting a giant dragon Pokémon, Tim lists off all of the moves Pikachu has in his arsenal that he could use to win the fight, but none of these are ever demonstrated, the film expects us to know what these nonsensical phrases mean. This happens over and over again. Inside jokes litter the script. Oh, that fish Pokémon is useless, look at those dubstep Pokémon, isn't <action> just like a <insert Pokémon here>? It's exhausting.

People complain about having to have seen 22 Marvel films in order to get all of the references in a film like Avengers: Endgame. Let me tell you, they have nothing on Detective Pikachu. The film's writers have mistaken cuteness for substance, and while there's little point in denying the awesome cuteness of Pikachu and his supernatural (?) cohorts, it's just not enough to hold a film with this many moving parts together in any satisfying way.

It's not all pointless, though. The film production and art design are impressive on any scale. Ryme City draws heavy influence from films like Blade Runner and Akira, with flashing neon at every turn mixed with the kind of scummy backstreets that made the former's backdrop feel so real. The Pokémon themselves are also pretty darn cute. Pikachu looks like a stuffed animal brought to life, even the most menacing Pokémon, like the villainous Mewtwo has the kindly massive eyes of a '30s baby doll cartoon.

Similarly entertaining is the relationship between Tim and Pikachu, which brings to mind the odd couple pairing of the cantankerous Eddie and the spastic Roger Rabbit in 1988's Who Framed Roger Rabbit?. They make for a great, mismatched team, while Tim seems to understand his partner's capabilities, the audience is only ever given a glance at what Pikachu can do, rather we are expected know going into the film that something is or is not within his power. It's very confusing.

Director Rob Letterman does what he can with a confusing script, but he cannot save this film from its desire to be everything to all Poké-fans. His previous work with a massive property, the 2015 Jack Black-led Goosebumps was a great ride with some fun performances and plenty of nods to the source material (with which I was similarly unfamiliar) that didn't get bogged down in the kind of winks and nods that make this film such a baffling slog. It feels like there's probably a cut of Detective Pikachu out there that is much slimmer and more free from fan service, but somewhere along the road, someone chomping a huge cigar decided that it wasn't Pokémon-y enough, and they padded it out to an unsustainable degree.

There's no denying that Pokémon Detective Pikachu is probably the cutest film we'll get all year, but sadly, it's not enough to just be cute, you have to make sense, and that's where this film fails.

Do you feel this content is inappropriate or infringes upon your rights? Click here to report it, or see our DMCA policy.
Detective PikachuJustice SmithPokemonRyan Reynolds