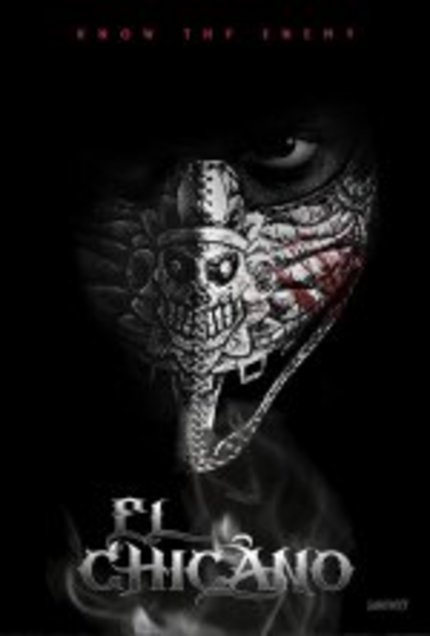 The superhero film craze has proven to be popcorn-pleasing box office gold over the last several years or so within Hollywood circles. Plus, street cred dramas basking in drugs and gangs tend to capitalize on the gritty, realistic aspects of confrontational entertainment. Additionally, what are the chances that supplying your superhero spectacle with macabre edginess drenched in hard knocks with an ethnic twist would find some kind of distinctive appeal? It can be accomplished if one looks at the recent success of another ethnocentric superhero flick that took the cinema scene by storm in the 2018 Oscar-nominated Black Panther.

Well, co-writer/director Ben Hernandez Bray's El Chicano looks to be an unconventional kind of action adventure Latino superhero flick that combines the aforementioned components mentioned above. As inventive and intriguing that Hernandez Bray's (along with co-scriber/producer Joe Carnahan) barrio-avenging exposition wants to achieve in potency, El Chicano is a grim cop caper/superhero urban pot-boiler that chugs along in cluttered, murky fashion. While conveying the Latin-flavored actioner layered in myth and mystery the humorless and dark tendencies feel utterly labored. Dripping in brutish violence as a police procedural, El Chicano is a sunken saga riddled in strained grade-B crime drama cliches.

Naturally, it would not be fair to compare and contrast the big-budgeted effectiveness of stylish blockbusters in the aforementioned Black Panther and Avengers: Endgame with Hernandez Bray's small-scale superhero/cop caper. Still, standing alone on its meager feet as a whispery pulp actioner with its atmospheric, low-budget foundation as it celebrates its Latino-themed hedonism through old-time Mexican folklore struggles to resonate as a defiant Spanish crusader patrolling for his beleaguered community. El Chicano takes itself too seriously and never allows for its rigid confines to echo anything loose-minded or campy to crack its stiffened, boorish shell. Devoutly drab and mechanical, El Chicano has its mind set on cultivating a cultural impact in the superhero genre but falls short of its experimental ambitions.

The premise that strings together the intriguing factors involves the complicated backstory of two twin brothers Diego and Pedro Hernandez. Diego (Raul Castillo) was the good apple that ended up working for law enforcement while look-a-like sibling Pedro decided becoming a bad apple as he worked against the law as a habitual criminal. The brothers grew up hard and disillusioned in the barrio section of LA as two decades earlier they experienced the head-scratching aura of the motorcycle-riding El Chicano in all his calculating glory. Dressed in black and hiding behind his mysterious persona, El Chicano stuck and definitely made his presence known in the hood.

Now, Diego Hernandez works for the LAPD as a detective solving some of the city's most gruesome cases. Brother Pedro's outcome was not so rosy as the frequent lawbreaker ended up committing suicide after his release from the joint. In any event, Diego and his partner Martinez (Jose Pablo Cantillo) are called upon by their superior Capt. Gomez (comedian George Lopez) to investigate the bloodshed of a bunch of gangbangers found slaughtered. What makes this particular assignment eerie is the significance of the crime scene that directly connects Diego and the deceased Pedro. Specifically, birthdates of the Hernandez Brothers are plastered on the executed bodies of the bloody gang members as well as the emblem "mito" (meaning "myth"). What could this possibly mean?

Soon, the twists and turns involving the gangbangers' execution in an abandoned building begs to shine a shifty spotlight on their leader Shotgun (David Castaneda) whose indifference to his crews' eradication is questionable. Incidentally, Shotgun is a childhood pal of do-gooder Diego but his notorious association with the likes of a father-son Mexican drug cartel duo (Sal Lopez's El Gallo and Roberto "Mr. Criminal" Garcia) figures into this morbid mess. Shotgun, it appears, is the son of one of El Chicano's chosen victims that had suffered his deadly wrath in the past. Both El Gallo and new minion Shotgun harbor sore feelings about the historical screw job of their people/country losing hold of California to outsiders. So there certainly are some axes to grind in terms of pride and possession.

The vintage legend of El Chicano weighs heavily on the minds of those closely affected by the barrio bad boy of vengeance. For Capt. Gomez, El Chicano definitely invaded his psyche many moons ago. In the consideration of Diego, he too has wondered about the mystique of the Masked One draped in black with trademark knife and cool cycle for transportation. Since the 1940's El Chicano has been the mythical wonder curing the East LA territory of its riff raff infestation. Instrumental in cleansing the region of its evil vibes, El Chicano is the essence of the symbolic goodness necessary to carry on this challenging mission--even if the intentions of heroic gestures are soaked in the blood of bombastic baddies. Thus, Diego's pursuit of curiosity and his deep dive into the random bloodbaths around town gradually has him taking on the raucous role as the resilient Mexican superhero side-stepping the embedded personal grief and coming to the emotional rescue of the deteriorating streets manipulated by maniacal misfits.

El Chicano thrives to be contemplative in its ode to the psychological makeup of a superhero of color as it incorporates the various elements of ideology and identification blended in the sense of promotional ethnicity, problematic societal angst, and valued tradition. Hernandez Bray has all the superhero cylinders on point from the perspective of crafting a plagued hero that brown people--particularly youngsters--can champion especially in the Trumpian era. However, the distinction of this conscientious Latino law enforcer rarely registers as the follow-the-dots road map of suspense and regret is pedestrian at best.

Unfortunately, El Chicano feels draggy in its sulking dramatics and leaves a few loose ends hanging without much fanfare (so what actually happened to Pedro?). The film's editing is relentlessly choppy and the acid-tongued dialogue is forced and out of sync with the urgency of the proceedings. As the phantom El Chicano, Castillo apes almost every tortured superpower soul's conflict from Batman's Bruce Wayne to Spider-Man's Peter Parker. The supporting cast get lost in the shuffle and do not add much to the bone when citing Aimee Garcia's disillusioned spouse of Diego/El Chicano for instance. And although it is refreshing to see funnyman George Lopez take on the no-nonsense turn of a haunted policing hotshot his participation still teeters on gimmickry.

No doubt El Chicano will save the day for the barrio in another follow-up film but hopefully the second time around will garner some flashier pep of redemption.

Do you feel this content is inappropriate or infringes upon your rights? Click here to report it, or see our DMCA policy.
cartelcop caperEl Chicanogang warsuperhero