Review: ALL IS TRUE, As The Bard Prepares to Slumber, You May, Too

Kenneth Branagh directs a domestic drama in which he stars as William Shakespeare. 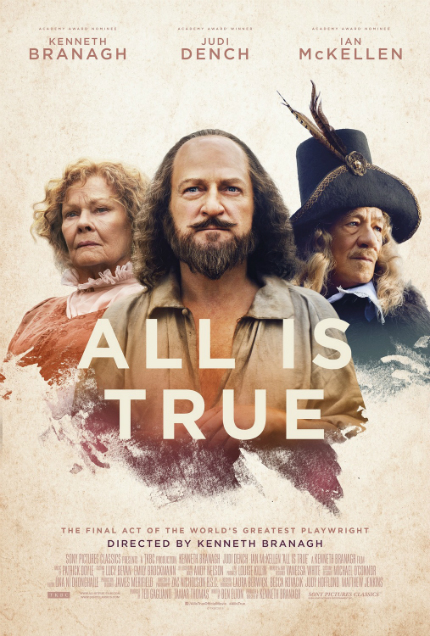 Once upon a time, William Shakespeare wrote some monumental plays that shaped the future of drama forever after. He also had a wife, children, probably a dog, and definitely a farm house. Guess which part of the Bard's life Kenneth Branagh has decided to explore in his latest film?

Directed by Branagh, and starring Branagh as Shakespeare, All Is True chooses to explore the greatest playwright ever after he stopped writing, and after he had retired to his estate, as he remained away from people in general but closer to his wife and children than he had ever been before.

A lifelong Shakespearean himself, Branagh first came to wide attention in the U.S. via his sprawling directorial debut, Henry V. His subsequent directorial efforts have covered a certain limited range, with an emphasis on broad variations on cinematic source material (Mary Shelley's Frankenstein, Sleuth, Thor, Cinderella, Murder on the Orient Express). Shakespeare's works continue to be a touchstone for him, as evidenced by his well-received adaptations of Much Ado About Nothing, Hamlet, among a handful of others.

After a series of masterpieces, Shakespeare's literary output understandably slowed, and after the Globe Theater burned down in 1613, Shakespeare moved to his country estate in Stratford and wrote no further plays. Yet the conflicts in his life continued apace, according to All Is True.

We are told that his immediate family had become accustomed to his absence, so upon his return, he was not greeted warmly. His wife Anne (Judi Dench) did not welcome him back into their marital bed. His daughters Judith (Kathryn Wilder), married to a pompous religious fellow, and Susanna (Lydia Wilson). a spinster consumed by despair, mostly bicker with each other and fight over their presumed inheritance.

As for Will himself, he spends many hours moping about the estate, mourning the death of his son Hamnet, Judith's twin brother, who passed away some ten years before. Will was too busy writing brilliant plays and enjoying his fame to spend much time to grieve, but now all he can do is grieve, grieve, gripe about other people, and grieve.

Ian MacKellan stops by to soak up some suds, but his visit is all too brief, and the film returns to a torpor of unhappiness, as everyone waits for the days to pass, as though everyone knew the exact date when William Shakespeare would do, as though everyone had the same fatal disease of misery.

I'd like to say that all's well that ends well, but All Is True ends on further unhappy, if true notes. It's the sort of very sincere, very contemplative, very well-acted piece that typically is of greatest interest to the filmmakers and the actors.

The film looks handsome, the grounds around the estate are lovingly shot by director of photography Zac Nicholson, James Merifeld's production design makes the most of its locations and detailed interiors, Una Ni Dhonghaile's editing is fine, and Ben Elton's script is fine. Certainly I respect Branagh's desire to make the film, and I trust that he and his comrades are satisfied with the results.

Your mileage may vary.

The film is now playing in select theaters in the U.S. via Sony Pictures Classics. Visit the official site for locations, showtimes, and more information.