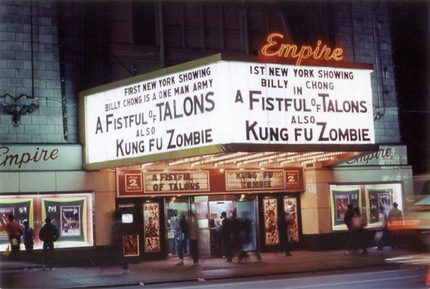 On March 21, 1973, audiences lured by fliers promising a free flick delivering “Sights and Sounds like never before!” settled into the Loews State theater in the heart of Times Square, and watched one of the most important foreign film premieres of all time — King Boxer. Dubbed into English and retitled Five Fingers of Death, it left jaws on the sticky floor and opened the floodgates for a tidal wave of kung fu flicks to swamp American grindhouse screens in the Summer of ‘73.

Bruce Lee died that July and his Enter the Dragon blew up the box office one month later. The King was dead! Long live the King! National General released his earlier Chinatown hits. AIP took Angela Mao, his sister in Dragon, dubbed her Lady Whirlwind into English, and dropped it in theaters as Deep Thrust. Bruce Lee’s biggest box office competitor, super-scowly superstar Jimmy Wong Yu, released his Chinese Boxer as Hammer of God. And then there were his mutant spawn.

Bruce Li, Bruce Le, Bruce Lai, Myron Bruce Lee, Judy Lee (billed as his sister — she later had to publicly apologize to the Lee family), Bruce Leung, Bruce Ly, and Bruce Lea kicked and screamed their way across the silver screen in a bumper crop of Bruceploitation flicks, and that’s not counting the films cobbled together from old footage of Bruce. Producer Larry Joachim licensed the theatrical rights to the Green Hornet TV show, which had introduced American audiences to Bruce Lee as the Green Hornet’s sidekick, Kato. His eleven-year-old son, Marco, edited the episodes together into two hit feature films.

A 24” x 36” shot of a barechested Bruce became the second-best-selling poster of the decade, right after that iconic shot of Farrah Fawcett in her red swimsuit. Bruce merch flooded the market and even his brother, Robert Lee, cashed in with an album of folk songs called The Ballad of Bruce Lee. Carl Douglas’s “Kung Fu Fighting” sold 11 million EPs. For our sins, we are cursed to hear his song over the end credits of every single martial arts movie ever released in the United States for all eternity.

I came to old school kung fu movies in the Eighties, once the steam started running out of the genre. World Northal had picked up 13 films for TV from Shaw Brothers, cut out all the violence, dubbed them into English, and released them as a syndicated package called “Black Belt Theater.” A huge hit, they quickly spun 90 more titles into syndication, and suddenly previously dead timeslots in the early afternoon and late evernings were full of people kung fu fighting. Imitating dubbed English dialogue while making “kssh kssh” sounds alongside stiff karate chops became America's #1 playground pasttime.

For years I only saw kung fu movies pan-and-scaned for VHS, their magnificent 2.35:1 frames brutally cropped to 4:3 for TV, dupey images smeary with noise, soundtracks thick with hiss. These movies looked like garbage because they were garbage, their only value derived from how many Ginsu knives with free bamboo woodchimes or Gerald’s Recap commercials could be packed in around them. I let Saturn Video, and Aquarius Releasing, and programming directors at Channel 2 define these movies for me.

It wasn’t until I was part of Subway Cinema and we did our first Old School Kung Fu Fest in 2000 that I realized I was an asshole. Seeing these movies on the big screen blew my mind. The lush Shaw Brothers sets, the ferocious filmmaking of Golden Harvest's hungry young guns, the devotion to emotion, the bleak final beatdowns that saw arms, and legs, and eyes, and personal dignity torn out, ripped apart, and stomped into the dirt, the heroes left shattered, or dead, or blind...all of this was waiting for me once the context changed from television graveyard to the big screen.

With their ultra-low budgets guaranteeing a return on their investment, producers didn’t care what their directors did, and so these movies sing a sweet song of freedom. Sammo Hung wanted to try a whole lot of everything and his early films mix unbelievably crass comedy with unbelievably insane action scenes. Yuen Wo-ping got classy with Crouching Tiger, Hidden Dragon but he and his brothers were nutso action surrealists back in the day, painting the screen twelve shades of “Huh?” in movies featuring Watermelon Monsters, fighting jars, and massive, angry marionettes.

It wasn’t just the big budget films either. Lo Wei didn’t wind up directing Bruce Lee and Jackie Chan's early films because he was bad. Lee Tso-nam turned out 54 flicks of brutal, bare-boned efficiency. Wong Fung’s eight Angela Mao films showcase his background as a writer in their go-for-broke storytelling. Hundreds of indie productions shot in the hills and outdoor courtyards of Taiwan and Hong Kong turned out to be revelations once I changed my expectations.

Even the cheapest chop sockey crews brought a level of craftsmanship missing from a lot of American exploitation films. Bored cinematographers and editors tried nutty experiments to break through the noise, working zoom lenses like trombone slides, shooting angles from under, over, behind, and through their performers. Directors tested their movies in front of rowdy audiences and recut and recut until what you see at home as dead pauses and random scenes explode into breaks for gasps and laughs, letting you catch your breath before the next big action blowout, when seen on the big screen.

Every year, Subway Cinema presents our Old School Kung Fu Fest because we believe these movies were meant to be seen on the big screen with a crowd, not on a monitor by yourself. We’re doing it again May 3 & 4 at the Anthology Film Archives and that’ll be it for the next couple of years. The Anthology is closing for a long time for renovations, and there’s nowhere else that could house this mayhem in a way where we can break even. So for two days, the Anthology will be a Times Square grindhouse circa 1973, and then we’ll return to seclusion to work on our kung fu. I missed out on these movies for a long time because of my preconceived notions about them. Don’t make the same mistake.

Grady Hendrix is a writer and film programmer and one of the founders of Subway Cinema and the New York Asian Film Festival. For much of his earlier life, he was a jerk. Don't be like him.

Do you feel this content is inappropriate or infringes upon your rights? Click here to report it, or see our DMCA policy.
bruce leebruceploitationhong kongmartial artsold school kung fusubway cinema