REVIEW: The Beach Bum needs to bury its kooky creative head in the sand 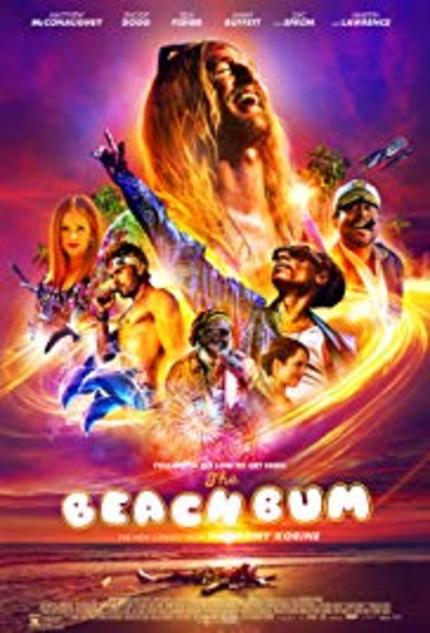 We can appreciate a much younger Matthew McConaughey being raucously "dazed and confused" back in director Richard Linklater's infectiously outlandish mid 90s teen drug comedy set in the Lone Star State. Now fast forward a quarter of a century later where a middle-aged McConaughey--slotted in the film history books as an Oscar-winning actor no less--headlines a generic stoner comedy flick that has all the natural high of an unfiltered, soggy joint. While coming off of the forgettable water-logged noir Serenity and now needlessly attached to this smirky disjointed dud McConaughey's questionable cinematic choices as of late literally seem up in smoke.

Perhaps we are not in on the inside joke referencing writer-director Harmony Korine's banal burnout tickler The Beach Bum? Korine, no stranger to serving up non-conformist, weed-loving weasels in all their garish glory in fare such as the better received Spring Breakers, banks on regaling the audience with McConaughey's insufferable pot-puffing poet deemed unique for his 1.) unconventional brilliance of insight and 2.) for being a complete unredeemable tool. What it boils down to is that The Beach Bum is just another misguided aim at satirizing the bombed-out-of-your-mind bad boy and the excesses of debauchery involved. Sure, it is easy to exploit the ridiculousness of sex, drugs, babes and booze but so what? What has The Beach Bum accomplished on its own merit other than aping the misplaced virtues of waste-and-weird anti-heroes as seen before in countless reckless romps? If The Beach Bum was intended for providing off-kilter commentary about aimless slackers and the American-made decadence that keeps them from ultimately attaining personalized achievement then this fetid farce really missed its wacky mark.

Indeed, star McConaughey is held in high regards for his on-screen stoner persona. One could argue that Korine would be a fool not to have McConaughey sign on the dotted line for his signature frilly-dressed, stoned-faced freak. It is too bad that McConaughey cannot strut his irreverent stuff in a chuckling clunker that has no substantial plot other than to promote twisty situational nonsense. There is nothing resourcefully lurid that transpires in The Beach Bum that warrants any legitimate shock value or sense of solid rambunctious residue. Korine wants to desperately channel all the gaudy cynicism and naughtiness in The Beach Bum that made for halfway decent fodder in the aforementioned Spring Breakers. Unfortunately, Beach is woefully unfocused and labors at its strained, off-the-wall indulgence. Sadly, Korine's hazy humor needs to bury its kooky creative head in the sand.

McConaughey, already an exhaustive walking parody of his stoner shtick, plays Miami Beach-based poet Moondog--an absolute asswipe whose artistry, intellect, and wisdom are seemingly off the charts. However, Moondog is not about towing the line or resembling a straight arrow. The poetic oddball lets it be known that he marches to the beat of his own deranged drum. After all, who cares about meeting deadlines, following a structured work ethic or simply being coherent enough to care about what is meaningful in life? Certainly not Moondog or the sordid crowd he hangs out with occasionally.

The film forcefully lets us know what kind of corrosive cad Moondog is at heart. He owns a boat called Well Hung and demonstrates his vessel's suggestive moniker to the many bimbos that he conquers at will. Moondog is a proud free-wheeler whose getting high (and sinking low) are truly the treasured traits that motivate this bong-loving bonehead. This is an ideal life for the moronic Moondog...screwing young chicks that flock to him, numbing his nerves with his dependable stash, committing petty crimes on a whim, writing poems when it suits his fancy, and embracing a doomsday attitude about ambition. Whatever.

Oh yeah...Moondog is a family man. How is that for an intentional giggle? He is married to a so-called trophy wife named Minnie (Isla Fisher) who is extremely wealthy but grossly unfaithful (she has been playing footsies with Snoop Dogg's character Lingerie--Moondog's best buddy). Minnie--no slouch when obtaining some random "booty to bang" like her bed-hopping hubby she supports financially--winds up taking the eternal dirt nap courtesy of a car accident. Of course, the now widowed Moondog is hampered by trying to get his opportunistic hands on dearly departed Minnie's riches because...get this...the sole condition is that he must finish his book of poetry in order to benefit from her demise. As far as being suitable daddy material to his daughter Heather (Stephania LaVie Owen) let's just say that Moondog is not going to win any immediate Father-of-the-Year awards any time soon.

For the most part, The Beach Bum wants to aimlessly celebrate its obnoxiousness to the full hilt. The problem remains that McConaughey's Moondog and the rest of the wannabe colorful rejects parading around in this scab of a film are not terribly interesting or intriguing in their deplorable skins. Korine pours on the cockeyed theatrics of Moondog's heavy-handed indiscretions but the miniscule pay-off to the labored shenanigans leaves one giving the side-eye to the flimsy foolishness at hand. The ratchet rhythm in the stained high jinks are overblown and tedious to boot. The arbitrary casting of supporting cameos that include the likes of Martin Lawrence's off-balance Captain Wack (and his coked-out bird), Zac Efron and Jonah Hill as standy-by dudes, and singer Jimmy Buffet (who is better off wasting away in Margaritaville than in this sketchy movie) all seem like a gimmicky stunt as best. Only Fisher's trifling tart Minnie escapes this hedonistic hump as a hearty chuckle worth the wait.

Cluttered and chaotic, The Beach Bum is nothing but pointless piffle simply overdosing on its own brand of "rude-dude" drudgery.

Do you feel this content is inappropriate or infringes upon your rights? Click here to report it, or see our DMCA policy.
comedyMatthew McConagheyThe Beach Bum